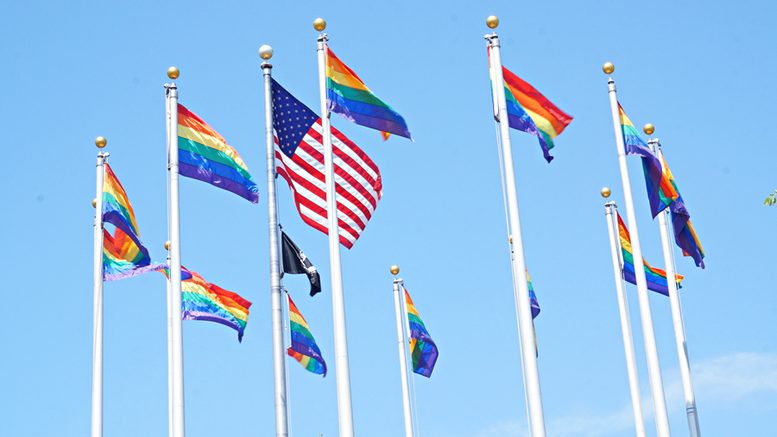 “One of the city officials [Ellen Talkowsky, City of Salem Event Planner] estimated about 5k and I would say that that’s pretty accurate,” said Captain Conrad Prosniewski, PIL, Salem Police Department, SPD. “That [number] was during the parade. Now, people came and went all day long so the number is actually greater than that, heading in the direction of 10,000, given the fluctuating crowd.”

The thousands of spectators lined the streets of the route, from Riley Plaza to the Salem Common to watch the parade. The parade’s participants—local businesses, churches, political candidates, office holders, school marchers, advocacy groups and more—walked or drove on their way to the Salem Common while waving flags, holding signs expressing messages of love, equal rights, solidarity, peace, and acceptance while many more showed direct messages to the Orlando shooting victims.

The SPD worked that day, especially in lieu of the recent Orlando, Fla. massacre. The safety of NSP goers was of utmost importance to the City and the SPD, whose job was to serve and protect its LGBT and allied attendees during the LGBT celebration—even on site was A K-9 dog, part of the team that secured the perimeter.

“In light of the Orlando shooting, we wanted to make sure we took the best necessary precautions to ensure everybody’s safety,” said Captain Prosniewski.

Nothing, however, was going to curb attendance and the sense of solidarity that many allies, also, showed during NSP’s 5th Anniversary. When asked about the record-setting size of the crowd at NSP, its president, Hope Watt-Bucci, had some thoughts to share.

“I thought it brought the largest crowd that we’ve had yet,” Watt-Bucci said. “I think it [the massive attendance] was a combination of various things. I think certainly we needed to come together as a community, in light of the tragedy in Orlando.”

Watt-Bucci is certain that the work the organization has carried out, through focusing on its mission and LGBT education also had something to do with the turnout.

“I think that North Shore pride has gained great recognition over the last five years,” she said. “We have grown together as an organization, as a community, and as an advocacy group for the LGBT people on the North Shore. We have gained great exposure through focusing on our mission, on education, reaching out to businesses to individuals and to schools to provide education … For example this week, we are speaking with the Department of Labor, providing a forum for discussion and education on needs and services for the LGBT community.”

“Salem is a leader in supporting the LGBTQ community, which is a source of pride for the whole city,” Rep. Tucker said. “Whether it’s the Non-Discrimination ordinance we passed, or the special events and conferences that are held for LGBTQ social or academic (as in Salem State U annual conference with NS Elder Services this year addressing aging in the Gay community) events, we are actively welcoming and encouraging.” 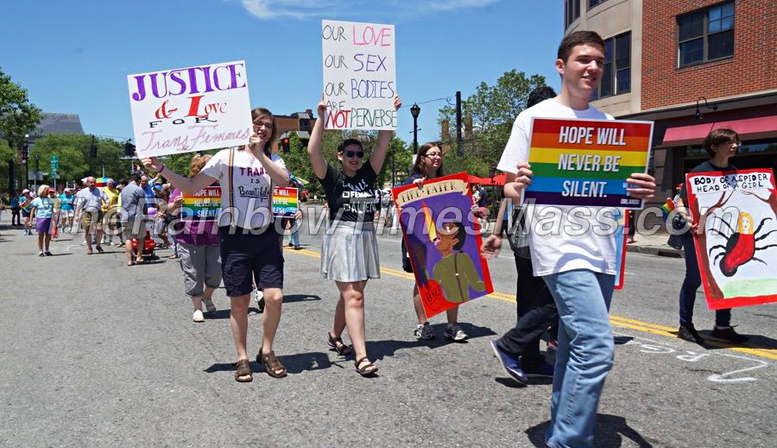 NSP’s 5th Anniversary, which took place almost two weeks after the Orlando, Florida shooting at Pulse nightclub that left 49 people dead and 53 injured, was heavily focused on the tragedy. Rep. Tucker expressed his feeling regarding the tragedy as filled with “sadness.” He, however, found a positive light in all the darkness that surrounded the massacre.

“… Amidst this tragedy was the goodness we saw in Salem at a heartfelt vigil, across the North Shore where people of all communities came together, and the collective mourning and genuine caring we felt across the country,” said Rep. Tucker of the vigils and support that emerged even on June 12, when the Orlando shooting took place.

Openly gay Salem City Councilor David Eppley, believes that the LGBT community may be safer if it were more involved in and demanded change from political leaders.

“The Orlando shooting reminds me that while apparently no place is safe, all of us need to demand dignity, respect, and a place to foster love over hate,” said Eppley, also an attorney. “We need to fight for political candidates with our wallets, our volunteerism, and our votes that do the same.”

In lieu of the Pulse Orlando slaying, other festival attendees have become more interested in politics as a means to fight the widespread homophobia that especially comes from some lawmakers and religious leaders’ comments.

“It has made me even more passionate about politics,” said Community Activist and LGBT Sub-Committee Co-Chair for the Mass. Democratic Party, Tyler Carlton. “It has made me feel even more proud to be gay and more a part of this community. We must truly stick together, especially with our allies, in order to bring the change that is needed.”

At the event, Carlton also diligently worked on raising funds to donate to Orlando organizations through a local youth group.

“The money is being donated through nAGLY to the Orlando Youth Alliance. A total of $544.51 was raised in total,” said Carlton. “The monies were raised by selling rainbow signs that read ‘Hope Will Never Be Silent.’”

NSP’s success, according to Prosniewski, is a testament to the importance that the City of Salem officials place on everyone’s civil rights.

“I think that the message the chief (Mary Butler) wants to send to the community is that we take care of our community,” he said. “No matter who it is, or where it is, everybody is a part of this community and everybody deserves their constitutional right of the pursuit of happiness. We are there to make sure that we guarantee that right.”

That sentiment was echoed by Carlton, who firmly believes that Salem is a special place to live in.

“I love the North Shore LGBTQ+ Community. Having lived in Texas, I know how difficult it can be being gay. But the community here is like a family. Through tragedy and through celebrations, we stick together,” said Carlton. “Last year, I organized a rally to celebrate the marriage ruling. The turnout was amazing and the community was proud and happy to be together. A few weeks ago, I held the candlelight vigil, and it was a very different circumstance but the community was still there, with a strong turnout, a sense of love, compassion, sadness, and community. We are truly blessed to live on the North Shore.”

That sense of togetherness and moving forward is what NSP continues to work throughout the year, not just at Pride.

“We are looking forward to our events throughout the coming year,” said Watt-Bucci. “We will be celebrating our five-year anniversary with a gala on October 14 at Spinelli’s Function Hall in Lynnfield.”

For more information about upcoming NSP events, visit NSP’s website or watch for the information coming up soon via the organization’s Facebook page. To see more photos of the event, click here.