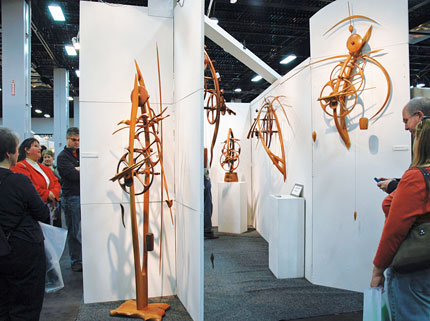 NORTHAMPTON, Mass.—New England’s most exciting and comprehensive arts fair, Paradise City Arts Festival opens to the public on Columbus Day Weekend, October 10, 11 & 12, 2015. Founded by working artists, this event is a unique opportunity to experience an entire festival designed from an artist’s perspective. The Festival is highly competitive and showcases the work of an ever-changing selection of America’s most outstanding painters, sculptors and fine craft makers, traveling from every corner of the country. Held in four buildings and under tents, Paradise City is an experience like no other—beautiful, unique, festive and fun.

The 21st annual event is the chance to meet face to face with over 260 extraordinary artists, enjoy sensational cuisine by Northampton’s best chefs and catch live performances by nationally and regionally acclaimed musicians. Stroll through a lush sculpture garden filled with artful delights and visit special exhibits, demonstrations and activities… all compelling reasons to visit Paradise City during the peak of New England’s fall foliage season. This fair was named the “#1 Arts Festival in America” in 2008 by AmericanStyle Magazine.

The themed exhibit at this fall’s show “Eat, Drink and Be Merry!” celebrates the art of dining, from the objects we use to prepare and serve our food to the environments we create in which to enjoy it. Artists have always chronicled our ritual enjoyment of food. It’s a short and tasty journey from Brueghel’s Wedding Feast in a Barn and Charles Ebbets’ famous 1932 photograph Lunch Atop a Skyscraper to the delectable concoctions Paradise City’s artists are whipping up for you in this entertaining special exhibit. Discover fresh and savory ideas everywhere in this October’s show.

Fabulous Food and Cool Jazz under the Festival Dining Tent

PBS provides multi-media ABC’s for kids, exciting entertainment for grown-ups such as Masterpiece Mystery and Downton Abbey, and fascinating scientific, political and cultural programming for all. WGBY Public Television for Western New England will receive 100% of the proceeds from the Festival’s Silent Art Auction, featuring hundreds of beautiful and valuable pieces donated by the Festival Artists.

Join Paradise City Arts Festival during American Craft Week, when the nation recognizes the countless ways handmade objects enrich our daily lives and contribute to our national aesthetic and economy. Paradise City is proud to be a sponsor of American Craft Week. Founding Director Linda Post says, “In this digital age, dominated by the production of objects without the touch of human hands, American craft makers have actually formed the cutting edge of a new movement. The younger generation, jaded by cookie-cutter products, has embraced the handmade like no other generation since the 1960s!”