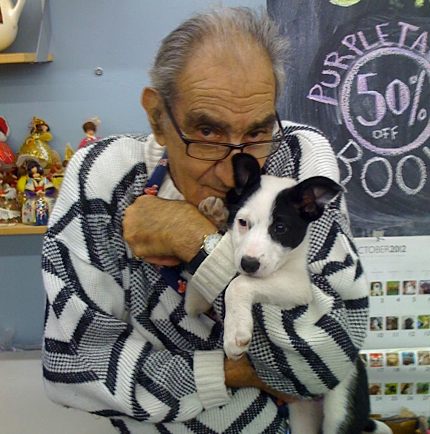 Henry “Hank” Theosian, a longtime volunteer at AIDS Action Committee who befriended everyone at the agency from the front desk receptionist to the CEO, died May 15 after a brief illness. He was 79 years old.

Theosian, who would have turned 80 in August, began volunteering for AIDS Action sometime in the 1990s. He became such a fixture at the organization that few who are employed there now can remember a time without him. A longtime survivor of HIV, Theosian was a boisterous ambassador for AIDS Action, talking up the agency and its work to whomever he met.

Theosian traveled from Medford by bus and train five days a week to volunteer at the Jamaica Plain Boomerangs where he stocked merchandise and processed donations. He earned the nickname “The Wizard” for his speed and efficiency. After sorting bins full of clothing, he would step back, admire his work, and say to whomever was nearby, “They don’t call me The Wizard for nothing!”

Theosian was territorial about his workspace, recalled Jasmine Crafts, Boomerangs General Manager. “Hank would swear like a sailor if his supplies were moved,” she noted.  [pullquote]Theosian, who would have turned 80 in August, began volunteering for AIDS Action sometime in the 1990s. He traveled from Medford by bus and train five days a week to volunteer at the Jamaica Plain Boomerangs where he stocked merchandise and processed donations.[/pullquote]

But Theosian was beloved by Boomerangs staff, most of whom were about 50 years his junior. Theosian took classes in interior design and sketched geometric-inspired drawings for his coworkers, with whom he bonded over cheese steak subs and a shared obsession with “Dancing with the Stars.”

“I watched every week and would fill Hank in on who was eliminated because he could never stay awake through an entire episode,” said Nancy Griffin, a former AIDS Action staffer who worked with Theosian.

Theosian also helped out at the registration desk at the AIDS Walk & 5K Run. “He would be wearing so many AIDS buttons and red ribbons that he looked like a billboard,” Griffin recalled.

Theosian also attended Pride every year, decked out in festive pink attire and riding on the Boomerangs truck.

Theosian loved animals and was deeply attached to Orca, the puppy of a Boomerangs employee. Orca died of kidney failure just days before Theospian was hospitalized, though he never knew of her death because no one on staff had the heart to deliver the sad news. [pullquote]“At the end of every day that included a visit from Hank, it was always obvious that the most important five minutes of my day took place with him.” — AIDS Action President & CEO Rebecca Haag, speaking of Theosian. [/pullquote]

Before beginning his eight-year stint with Boomerangs, Theosian volunteered in the mail room of AIDS Action. Staff always knew if Theosian had been there because he left behind a trail of tiny paper cuttings.

“He was a whirlwind on the shredding machine,” observed Susan Kelley, AIDS Action Vice President of Operations.

AIDS Action President & CEO Rebecca Haag recalled that Theosian would every now and again come into her office—always unannounced—and start talking about something going on at the agency.

“As he was talking, I would always initially think about all of the things I needed to be doing, but then I would just settle into the moment and talk with him,” she said. “At the end of every day that included a visit from Hank, it was always obvious that the most important five minutes of my day took place with him.”