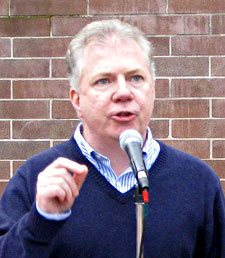 Media in Seattle characterized Murray as a politician willing to implement incremental plans to get approval for such measures as last year’s marriage equality law.

“The prolonged marriage battle is Murray’s model for how he would go about being mayor,” stated an article in Sunday’s Seattle Post Intelligencer. “He’s not big on symbolism. He’s not into ‘lecturing and finger pointing.’ He never wants to go it alone.”

There was other good news for gay candidates last night. Houston’s lesbian Mayor Annise Parker’s bid for a third term was at the top of the Gay & Lesbian Victory Fund top 10 important “races to watch” Tuesday, and Parker won handily. According to the Harris County Elections Division, Parker took 57 percent of the vote against a field of eight challengers. Her closest challenger, another Democrat, Ben Hall, received only 28 percent. Because of term limits, this will be Parker’s last term as head of the fourth most populous city in the United States.

Another openly gay candidate, Michael Gongora, a city commissioner in heavily gay Miami Beach, Florida, appears to have come up a little short in his bid for the mayoral seat in that city. Gongora was one of four candidates running for the mayor’s seat and at deadline unofficial election results showed Gongora in second, with 37 percent of the 9,217 votes that had been tallied. Phillip Levine had 50.70 percent –just enough to avoid a run-off. (If no one candidates gets at least 50 percent of the vote, there will be a run-off on November 19.) Only 10 percent of registered voters turned out for the race.

Celia Israel was one of four candidates running in a special election to fill a vacant state representative seat from the Austin, Texas, area. According to Texas Elections Division information, Israel, treasurer of Stonewall Democrats of Austin, came in second with 32 percent of the vote, behind Mike VanDeWalle who garnered 40 percent. Because no candidate received 50 percent of the vote, Israel and VanDeWalle will meet in a run-off next month.

INCUMBENT New Jersey State Assemblyman Tim Eustace, a Democrat, ran for re-election to a second term as representative of District 38, in the northeast corner of the state. Eustace is a co-author of the New Jersey marriage equality bill that passed the Assembly last year. New Jersey election officials had not posted results last night but NJ.com showed early returns (11 percent reporting) with Eustace tied for third place, with 22 percent of the vote. The first and second-place candidates won only 29 percent and 27 percent respectively.

Incumbent Minneapolis City Council member Robert Lilligren was running for re-election to represent Ward 6. While the city’s elections division had not yet posted results last night, Lilligren, 53, appeared to be the second-highest vote getter, with 32 percent of the vote. Lilligren has served on the council since 2001. A residential property developer, he earned the endorsement of the Minneapolis Star Tribune.

THREE OPENLY GAY people ran for seats on city councils: a newcomer, Darden Rice won a seat in St. Petersburg, Florida with 55 percent of the vote; and seeking re-election, LaWana Mayfield in Charlotte, North Carolina, won re-electoin with 77 percent of the vote; and Chris Seelbach in Cincinnati was the sixth top vote-getter out of 21 candidates for nine seats.

The Gay and Lesbian Victory Fund also endorsed Catherine LaFond for a seat on the Water System Commission of Charleston, South Carolina.

And early indications are that Catherine LaFond has won the right to a run-off for a seat on the Water System Commission of Charleston, South Carolina. The Victory Fund says that, if she’s elected, she will be the first person to run and win as an openly LGBT candidate.