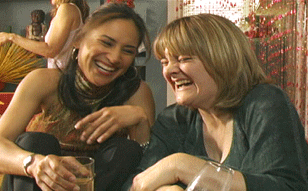 Scene from "Getting to Know You", a comedy about dating, one of the films in Out! For Reel's Lesbian Film Festival, Saturday, February 11, Smith College. Credit: Liz Lachman

Scene from "Getting to Know You", a comedy about dating, one of the films in Out! For Reel's Lesbian Film Festival, Saturday, February 11, Smith College. Credit: Liz Lachman

On Saturday, February 11, The Lesbian Film Festival, at Wright Hall, Smith College, Northampton will be a one night festival offering a variety of films in two separate shows. The first show, starting at 5:15 pm, will be an encore screening of “Kiss Me”, the new lesbian hit feature film from Sweden. The second show, starting at 7:20 pm, will screen “Best Lesbian Shorts: Love & Friendship” and the new short documentary, “T’Aint Nobody’s Bizness: Queer Blues Divas of the 1920s”.

The “Best Lesbian Shorts: Love & Friendship” will include award-winning shorts that offer a variety of funny, romantic, and heartwarming stories about dating, love, and friendship. Television actors Dana Delany (star of “Body of Proof”) and Michelle Bonilla (star of “Bones”) star in the centerpiece short, “Getting to Know You” by Emmy Award-winning filmmaker Liz Lachman. This polished comedy is a tongue in cheek satire on dating and the search for Ms. Right.

The rest of the shorts program include: “What Hot Guy”, a funny spoof on one night stands, “Dancing To Happiness”, an uplifting Belgium film (subtitled) about how true love and the love of dancing can overcome any obstacle, and “Hi Maya”, a heartwarming Swiss film about a fifty year friendship re-ignited into romance.

For the 5:15 pm show, the engaging romantic film “Kiss Me” tells the story of future stepsisters, Mia and Frida, two thirty-something professionals, who meet at the engagement party of Frida’s mother and Mia’s father and unexpectedly fall for each other. Swedish film director Alexandra-Therese Keining offers an intriguing, heartfelt love story that is a smorgasbord of deep emotions, sensual love scenes, beautiful cinematography, and an irresistible music soundtrack. This film has easy to read subtitles.

The season centerpiece, on Saturday, March 3, the New England Premiere of “Cloudburst” starring Olympia Dukakis, will be shown at the Academy of Music Theatre in Northampton. “Cloudburst” tells the powerful, poignant story of an older lesbian couple in a thirty year relationship escaping out of a nursing home to get married in Canada so that family members cannot separate them. Olympia Dukakis is superb in her role as Stella, the gruff, lovable, cowboy hat wearing butch lesbian who is passionately devoted to her partner Dottie. This exquisite film gives it all: a beautiful love story, a daring road trip, laugh out loud humor, and an unforgettable journey of the heart for both the characters and the audience. This is a film you will always remember.

The season finale on Saturday, May 5, is “The Perfect Family”, starring Kathleen Turner and Richard Chamberlain and will be shown at the Northampton High School Theater. The film is a story about a pious Catholic woman, played by Kathleen Turner, who wants to win the Catholic woman of the year award. The glitch is that her daughter is an out lesbian who is planning to get married and have a baby. This film is delightful, fresh, and funny. It shows the pain homophobia can cause in a family and the healing that can be created with love and acceptance. Kathleen Turner is truly amazing.

Out! For Reel’s 2012 season is in high gear with these fabulous new films:

For tickets and information, go to www.OutForReel.org.