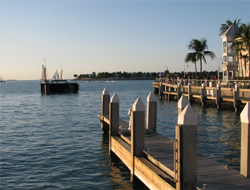 Key West's beautiful waterfront, from near the foot of historic Duval Street. Photo by: Andrew Collins

Key West's beautiful waterfront, from near the foot of historic Duval Street. Photo by: Andrew Collins

By: Andrew Collins*/Special for TRT–

Even with much of North America enjoying a comparably mild winter this year, let’s face it – thoughts of sipping tropical cocktails by the pool, floating happily on a catamaran, and scampering to the beach in flip-flops sound pretty appealing right now. There are still a few mean weeks left in winter, and one of the world’s most delightfully distinctive and wonderfully scenic gay resort destinations beckons. In fact, sunny Key West has lately made a strong push to market itself as the ultimate Gay Spring Break getaway.

This tiny island is linked to the Florida mainland by the 105-mile Overseas Highway (U.S. 1), which crosses dozens of bridges as it wends its way scenically through the Florida Keys. It’s the southernmost point in the United States (with the exception of Hawaii), and it’s less than 90 miles across the Straits of Florida from Cuba. In other words, while Key West is very much part of the United States, it feels much like its own little Caribbean nation (they don’t call it the “Conch Republic” for nothing). This makes it an ideal tropical getaway if you’re seeking the climate and character of the Caribbean, but with an exceedingly welcoming attitude toward gays and lesbians. It’s also pretty easy to get here – if you’d rather forego the pretty 3-hour drive from Miami, just fly here: Key West is served by a variety of major airlines with direct flights to Miami, Orlando, Fort Lauderdale, Atlanta, and Tampa.

Key West’s Gay Spring Break promotion (gayspringbreakkeywest.com) is aimed squarely at the thousands of college students who plan their vacations throughout late winter and into early spring. All you have to do to partake of a number of discounts provided by local gay-frequented resorts, restaurants, bars, and attractions is present your student I.D. to the staff at the Key West Business Guild (gaykeywestfl.com), right off historic Duval Street at 513 Truman Avenue. Do this, and you’ll be issued a Gay Spring Break Card.

Of course, even if you’re not a student, this is a great time of year to visit (perhaps you like hanging out in bars and gay resorts packed with college students?). And the Key West Business Guild, which functions as the town’s gay welcome center, is worth a stop as well to pick up brochures and advice on where to go, and also to visit the fascinating free exhibit on legendary playwright Tennessee Williams, who spent much of his life here.

As utterly relaxing as it is here, Key West actually has enough in the way of museums and activities to keep activity-seekers quite happy. In addition to Tennessee Williams, the island has been a part-time home of author Ernest Hemingway, whose rambling old mansion is open for tours (note the many friendly six- and seven-toed cats living on the property, descendants of “Papa’s” own feline friends). And President Harry Truman set up his “Winter White House” here in 1946 – it, too, is a museum.

You’ll also find a several tour companies and boat charters catering enthusiastically to the gay market, including Blu Q Catamaran Gay Sailing, Danger Charters, and several other outfitters. And you can catch a ride to Fort Jefferson and Dry Tortugas National Park on the Yankee Freedom II ferry – it’s a long way out to this intriguing island park, but the ride – which includes breakfast, lunch, and snorkeling—is part of the fun. There’s also a Gay Key West Trolley Tour every Saturday at 4 p.m.

It’s sometimes said, erroneously, that Key West lacks beaches. It is true that compared with many Florida and Caribbean destinations, few accommodations have direct beachfront. But you will find some stunning stretches of sand within walking distance of Historic District hotels and guesthouses, including Fort Zachary Taylor, Smathers Beach, and Higgs Beach.

As you might guess, given the island’s location, both seafood and Latin American cuisine are major culinary highlights in Key West. You’ll find plenty of excellent restaurants around town, all of them casual in spirit but some turning out impressively sophisticated contemporary cuisine. A couple of newer spots around town have been garnering acclaim of late, including gay-owned Flaming Buoy Filet Co. (theflamingbuoy.com), a cozy and romantic spot serving eclectic, first-rate cuisine, like tuna-watermelon ceviche and pan-seared mahimahi with banana salsa. Don’t miss the avocado cheesecake when it’s featured. Tucked down a quite lane off of Duval, brand-new 2 Cents (facebook.com/2centsKw) is garnering raves from discerning foodies for its stellar yet affordable gastro-pub cuisine.

Near the gay guesthouses on Fleming Street, dapper Azur (azurkeywest.com) turns out artfully prepared Mediterranean-inspired creations, such as yellowtail-snapper Benedict for brunch, and duck and pork ribs cassoulet at dinner. You can’t go wrong with Pepe’s (pepescafe.net), a stalwart for steaks, oysters and old-school classics since 1909. Nearby B.O.’s Fish Wagon (bosfishwagon.com) is a breezy, open-air spot serving delicious conch fritters, soft-shell crab, and quite possibly the best fried grouper sandwich in Key West. Walk a few doors over to Coffee Plantation (coffeeplantationkeywest.com) for espresso drinks, tasty desserts, and comfy seating with free Wi-Fi.

One of the better Italian restaurants in town, and also one of the gayest, La Trattoria (latrattoria.us) draws high praise for such tasty, traditional creations as gnocchi gorgonzola and scallops in scampi sauce. Seven Fish (7fish.com), which occupies an old luncheonette and has a sleek, sophisticated interior, serves seafood-oriented bistro fare, such as crab and shiitake mushroom ravioli.

El Siboney (elsiboneyrestaurant.com), with its simple ambience, is the place in town for humble, stick-to-your-ribs Cuban fare. As for traditional Cuban sandwiches, tiny 5 Brothers Grocery (http://5brothersgrocery.tripod.com) – on a side street in the historic district – serves the best around.

Most the town’s several gay bars are along the main drag, Duval Street. Here, the La-Te-Da (lateda.com) guest house has a poolside bar, an intimate piano bar, and a much-beloved cabaret. Down a few blocks, the New Orleans-inspired Bourbon Street Pub (bourbonstpub.com) is a sauce-y spot with a small bar up front with cocktail tables, a larger outdoor bar in back (along with a lively pool area and hot tub), and video screens galore. It’s part of the sexually charged (and very friendly) New Orleans Guest House (neworleanshousekw.com) complex. The same owners run the lovably raffish 801 Bar (801bourbon.com), Key West’s definitive neighborhood hangout since the 1970s. There’s almost always a crowd of gossipy locals around the bar. The adjacent One Saloon caters mostly to leather-and-Levi’s types and is reached through 801’s back door. Aqua Nightclub (aquakeywest.com), which was handsomely remodeled in 2011, is best known for its raucous drag shows and an impressive dance floor with high-tech laser-and-sound shows, and a cozy video bar.

Key West has a number of inns that cater either exclusively or predominantly to the gay market. One of the best is Alexander’s (alexanderskeywest.com), a long-popular gay resort with the relatively unusual policy of being both clothing-optional (on the two upper sundecks) and welcoming to both women and men. Aromatic tropical flowers, sundecks, rattan and wicker furnishings, and sparkling tiled bathrooms impart Alexander’s with a classy but casual look. In addition to the aforementioned New Orleans Guest House, the town’s other favorite accommodation for guys seeking cruise-y adventures but still wanting upscale and extremely well-maintained accommodations is the iconic Island House (islandhousekeywest.com). Day passes are available, with access to bar as well as the 24-hour heated pool, indoor and outdoor Jacuzzis, gym, sauna, steam room, and erotic-male-video lounge.

Most of the town’s men’s resorts are along Fleming Street, the Historic District’s main drag. Here you’ll find Equator (equatorresort.com), which has plush rooms with contemporary Caribbean-influenced furniture. The lovely grounds include a compact but pretty pool and a nice sundeck. Nearby, the largest gay resort in town comprises three distinct and very social properties – the Oasis, Coral Tree Inn, and Coconut Grove (keywest-allmale.com)- operated by the same management. Drawing a predominantly male crowd, Big Ruby’s (bigrubys.com) is less than a block from Duval Street, hidden behind high walls from noise and street traffic. The grounds feature towering palm trees and fragrant flowers, and an abundance of sundecks. Rooms are warm, contemporary, spotless.

Key West has dozens of other terrific places to stay among mainstream properties, from historic inns to posh resorts – they all readily roll out the rainbow carpet. A favorite among the former is the atmospheric Cypress House (cypresshousekw.com), a rambling compound that includes a historic mansion and two Bahamian conch-style cottages— 22 rooms total. With a central location, reasonable rates, and a super-friendly staff, this gay-owned property is a great find. Among larger hotels and resorts, the Crowne Plaza Key West (laconchakeywest.com) on historic Duval Street, the elegant Hyatt Resort & Spa (keywest.hyatt.com), and the swanky Westin Resort & Marina (westinkeywestresort.com) are all great bets.

*Andrew Collins covers gay travel for the New York Times-owned website GayTravel.About.com and is the author of Fodor’s Gay Guide to the USA. He can be reached care of this publication or at OutofTown@qsyndicate.com.