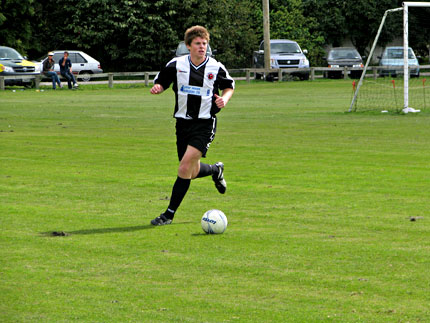 As a young referee, Ryan Powell heard a coach yell at a youth soccer player: “Stop being a fairy! And PLAY!” Powell red-carded the coach. The official’s supervisor then called and said sharply, “Don’t let your personal life interfere with your work.”

Powell was upset. “That meant, as a gay man I should ignore remarks on the field. Well, the first lesson of refereeing is to have conviction. Blow the whistle, give the card, issue the send-off. I will never back down from that.”

Not long after, during an intense Under-17 boys game, Powell called a foul. After a brief scuffle, one player called another a “faggot.” Again, the referee issued a card. Again, there was a protest. Again, Powell was told not to let his personal feelings hamper his career.

Sports fans often focus on athletes, coaches and games. But without officials, there would be no matches. And as in every other aspect of life—including sports—some referees are gay or lesbian.

Ryan Powell is not his real name. He’s using an alias because he is not yet out to all his colleagues. He is not ready to be looked at as “the gay ref.” But he knows who he is. He’s proud of himself. And his story is very instructive.

When Powell was a high school senior, his coach made all the players become certified as referees. The idea was that they would learn more about the game. Powell enjoyed officiating (and the money he earned). He moved quickly up the ranks, earning praise as a fair, knowledgeable official.

Being a referee is “our way of giving back to the game,” Powell says. Referees have a great deal of influence over player development. “We teach the game as much as coaches,” he notes. [pullquote]Referees are “a brotherhood,” he says. “We support each other, solve problems together, spend a lot of time together.” Yet because he felt uncomfortable sharing his sexuality—he had not heard anything that led him to believe his colleagues would support him – he stayed in the soccer closet. That was difficult, professionally and personally. “When you don’t share anything about yourself, people think you’re standoffish,” he explains. “It’s not true, but that perception becomes reality.”[/pullquote]

Powell came out to friends and family members at 19. But for several years, he was not out to even one fellow official.

Referees are “a brotherhood,” he says. “We support each other, solve problems together, spend a lot of time together.” Yet because he felt uncomfortable sharing his sexuality—he had not heard anything that led him to believe his colleagues would support him – he stayed in the soccer closet. That was difficult, professionally and personally. “When you don’t share anything about yourself, people think you’re standoffish,” he explains. “It’s not true, but that perception becomes reality.”

Gradually, Powell trusted a few fellow officials enough to come out. They were fine. But word spread. At a regional tournament—an important step in a soccer referee’s advancement—his assigned roommate refused to share a hotel room with Powell. Throughout the five-day event, Powell felt awkward. “There was animosity in the air,” he says.

He did not think he could discuss the situation with anyone. He did not want to create trouble, or pit one group of officials against another.

And, he notes, referees are “independent contractors.” They lack labor protection.

“It’s hard to advance as a referee when you are open about your sexuality,” Powell says. “It’s true that athletes now have an easier time. They’re young, and there’s a new mentality. Some of the coaches are young too.”

However, referees – particularly those in powerful positions – tend to be older and “conservative,” according to Powell. “The people who make important referee decisions in local and state organizations are, for the most part, over 60.”

If older officials do talk positively about sexuality, Powell says, they often add the caveat, “I just don’t think they should broadcast it.”

That is “very hurtful. It’s the same as saying, ‘Don’t open up and share anything about yourself. Just come to the field, then leave.’”
Referees working their way up the soccer ladder travel often. Yet, Powell says, “It’s taboo to mention that your boyfriend is staying back at the hotel. And you can’t encourage him to come to your game to support you.”

That isolation drove Powell’s first partner away. “I was too ashamed to bring him to events,” Powell says with regret. “I just wanted to keep myself out of the headlines. I didn’t want any ‘drama.’ So he never got to understand my love for soccer, and for refereeing.”

It’s a love that’s burrowed deep in Powell’s persona. His goal is to become a top-level referee.

Yet the older he gets, the more he realizes “I don’t want to shelter myself for the sake of getting ahead. I want to earn what I have on my own merits.”

It won’t be easy, but Powell is inching out of the professional closet.

Besides, he adds, “The number of world-class officials who are gay would surprise a lot of people.”