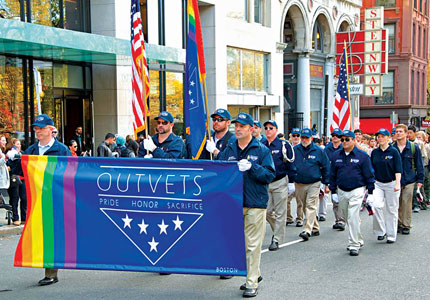 BOSTON, Mass.—Last month, The South Boston Allied War Veterans Council (AWVC) voted 5-4 in favor of allowing an LGBT veterans organization to march in South Boston’s St. Patrick’s Day Parade. This historic procession, first started in 1901, has had a long history of debating whether or not members of the LGBT community may participate.

“I’m ecstatic with the vote,” said Robert Santiago, chief operating officer for OUTVETS. “[It] was based primarily on our status as veterans. All veterans deserve to be recognized for their service. We will be marching as veterans who happen to be gay.” [pullquote]“Mayor Walsh has been advocating for an inclusive parade for quite some time. We’re thrilled to hear that the South Boston Allied War Veterans Council has decided to make the 2015 parade an inclusive event.”—Kate Norton, the press secretary for Mayor Walsh[/pullquote]

From 1992-1994 state courts forced the AWVC to let the Irish-American Gay, Lesbian and Bisexual Group of Boston participate, but the event’s sponsors responded by calling off the parades altogether. In 1995, this resulted in the U.S. Supreme Court voting unanimously to not allow LGBT groups to march via freedom of speech for the AWVC.

OUTVETS is the first nonpartisan, nonpolitical veterans organization in the nation. This lack of social agenda led the AWVC to decide that OUTVETS could participate. The vote comes after OUTVETS’ historic appearance as the first ever LGBT group to march in Boston’s Veterans Day Parade this past November. The group was able to rally a total of 23 people to participate.

In March 2014, AWVC organizers denied MassEquality the opportunity to march in the parade. The decision resulted in Boston Mayor Marty Walsh, the son of Irish immigrants, publicly boycotting the parade, which typically draws thousands of spectators.

“We’re very pleased to hear that OUTVETS will be marching in this year’s parade,” said Kate Norton, the press secretary for Mayor Walsh, in a statement. “Mayor Walsh has been advocating for an inclusive parade for quite some time. We’re thrilled to hear that the South Boston Allied War Veterans Council has decided to make the 2015 parade an inclusive event.”

OUTVETS is a relatively new organization and was only incorporated this past September in the Commonwealth of Massachusetts; it has since filed paperwork to become a 501(c)(3) nonprofit. Despite being new, its founder and 20-year U.S. Air Force Veteran Bryan Bishop said he has been thinking about starting such an organization since he first entered active duty in 1987. Bishop got the ball rolling with OUTVETS when he started discussing the idea with some coworkers at his day job as the chief of staff for Boston’s Veterans’ Services agency.

“I tasked Bryan with seeing what could be done with some of the negativity around the St. Patrick’s Day Parade,” said Francisco Urena, commissioner of Veterans’ Services for the City of Boston. “So Bryan took the charge to gather a group of men and women who shared the same vision and created the OUTVETS group. We are extremely profound in the city of Boston to have a group of such character that assists these veterans and their families.”

Although OUTVETS has roots in the City of Boston’s Veterans’ Services, the two organizations are independent of one another. Yet, it is possible that Veterans’ Services could collaborate with OUTVETS on projects, as they would with any other veteran organization. Currently, the organization’s operations include seven board members, who hope to have a chapter in all 50 states by the end of 2016. [pullquote]From 1992-1994 state courts forced the AWVC to let the Irish-American Gay, Lesbian and Bisexual Group of Boston participate, but the event’s sponsors responded by calling off the parades altogether. In 1995, this resulted in the U.S. Supreme Court voting unanimously to not allow LGBT groups to march via freedom of speech for the AWVC.[/pullquote]

“I would be interested in joining such a group,” said Corey Hodges, a submarine warfare officer of the United States Navy. “I am an involved member of the veteran affairs and advocacy groups within my university. While there are a good number of benefits and support for veterans, I don’t think these efforts commensurate with the sacrifices that most of our uniformed service members have to face during their time of service. Some groups have it harder than others. During my time, the LGBT community in particular was one such group. Although things are getting better by way of new policy, changes in administration, and conformance to the national sentiment, the LGBT community is still an extremely difficult and isolating community to be a part of while serving. Any group that advocates lessening or abolishing such adversity is worth its salt and is an organization of which I would gladly be part.”

In his 20 years with the Air Force, Bishop has experienced the military before and during Don’t Ask, Don’t Tell (DADT), the nation’s former military policy of prohibiting military personnel from revealing if they were lesbian, gay or bisexual and discharging those who were found out. One of the many goals OUTVETS hopes to achieve includes declaring September 20, the day DADT was repealed, as LGBT Veteran Freedom Day. Bishop foresees a rally, ceremony and military ball if such a day is declared.

“They could really go down on witch hunts and try and kick you out, and DADT kind of just masked it,” said Bishop. “It was a little bit harder to get people out, but people were still getting discharged because of their sexuality. The military as a whole lost such great talent when they did that and they realized it. Thank God DADT went away and now everyone is open. For the most part its gone off without a hitch.”

This January OUTVETS will be holding a blanket drive for the New England Center for Homeless Veterans. The donations will kick off at Boston’s Club Cafe at 1 p.m. January 11 with an OUTVETS brunch. Other blanket donation spots will be available throughout Boston.