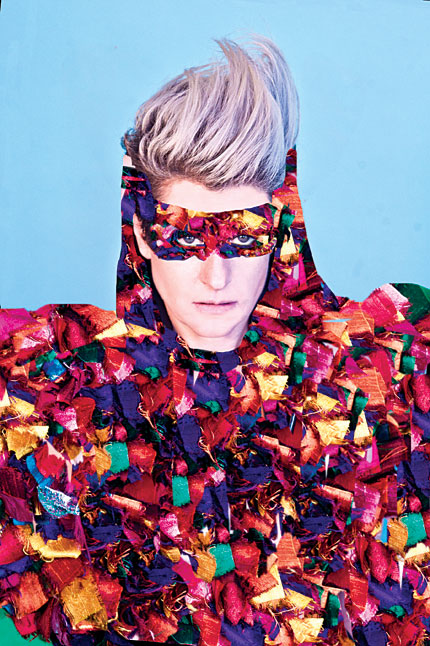 “Look. I don’t have breasts anymore.”

Peaches is reminiscing on a dear friend she grew up with, when he showed up at her door, and came out to her as transgender. Memories of their summers spent together spill out of her as if they happened yesterday.

They didn’t, of course. Those summers are long past. But the influence of Sean (then Susan) on young Peaches endures because it was “quite big,” the music-making provocateur reveals as she traces her own path to self-discovery.

The Toronto-born, Berlin-based Peaches is 46 now, and as a revered wielder of raunch, she has devoted her 20-year career to cutting down gender norms with her electroclash throwdowns. And sex—she sings a lot about that too.

After dropping her 1995 debut Fancypants Hoodlum, released under her birth name, Merrill Beth Nisker, she ignited a sexual frenzy with “F*ck the Pain Away,” a song that’s about as subtle as its title. With a colorful tracklist that includes “V*ginoplasty” and “Dick in the Air,” Rub, her latest queer contribution, doesn’t beat around the bush either.

In conversation, Peaches is just as freewheeling. During our interview, the performance artist talked p3nis onesies, menstruation and learning to love your v@gina.

Q. You studied theater but then ended up going into music. How surrounded were you by queer culture during that period in your life? And how did what you experience shape you and your desire to explore queerness in your art?

A. It was an arts culture, but it wasn’t necessarily queer at that time. But I did have a serious relationship at the time with a woman – or a girl, or a girl becoming a woman – so I was growing up spending my summers, from when I was 7 to 14, with one person. Her childhood name was Susan, and she told me when she was 7, “I’m a guy. I don’t know why I’m in this woman’s body.”

She used to punch me in the stomach and be like, “See how strong I am!” She was just a very strong character. Also humorous but scathing too – quite tortured. And then slowly, she became a man. At 18 she came over and said, “Look. I don’t have breasts anymore,” and became who he wanted to be: Sean. So early on I was already questioning these things through the experience of the one person I spent all my summers with.

Q. When did you feel you had a handle on who you were?

Q. How would you describe Rub to a 12-year-old kid?

A. “This is an album you listen to to make your parents angry.” It’s exactly what a 12-year-old wants to listen to. You wanna giggle along to “D*ck in the Air.” Kids are way more advanced now. They can handle this.

Yeah. And if they can’t, then they have very good mechanisms of denial. I know I did in my head, and then years later, I’d be like, “Oh wait, I like that song” or, “That thing I didn’t understand – I get it now!” I remember hearing that song by Berlin called “Sex (I’m A)” on the radio and being like, “What was that?!”

Q. How did you first learn about sex?

A. Wow. I don’t really remember, which is funny. I do remember being in the shower with my mother and asking her what a period was.

Q. How did she explain a period?

A. Just very matter of factly. I remember kids three years older than me being like, “Do you put a period at the end of a sentence?”

Q. Why has sex – and not just sex, but visceral, in-your-face sex – been such a muse in your career?

It just amazed me, the imbalance of how men would express themselves in classic rock songs. Rod Stewart stuff. “Spread your wings and let me come inside.” Why am I singing that? Why is half the population singing that? I wanna sing my way. So I did it my way, wondering why there was this imbalance and why I like these songs. I’m singing along with old blues songs too. But, actually, old blues songs were more balanced, like Bessie Smith: “I need a little sugar in my bowl; I need a little hot dog on my roll.” You know, there’s nothing subtle about that.

Q. There was a time when it was taboo for females to be frank about their sexuality. You really blazed that trail.

A. And I’m really happy about that. (People) would be like, “Why do you write these songs?” And I’d be like, “I feel like this is a missing link in what we actually need to evolve into,” and also, yeah, questioning what was mainstream and saying, “I don’t want to bow to the mainstream; I want the mainstream to come up to me.” Now, 15 years later, the mainstream actually is coming to me. So I’m like, “Woooohoooo.”

Q. What is your opinion of sex in mainstream culture these days?

A. The same. What do you think?

Q. Not because I like it, but what comes to mind is that J. Lo and Iggy Azalea video for “Booty.”

A. Ack! It just doesn’t work as a song. If it worked as a song, maybe it would be interesting. I would think more of Nicki Minaj and Beyoncé’s “Feeling Myself,” and (Nicki) says “I’m feelin’ myself, jack rabbit” – that’s such a good line. I think that Nicki Minaj broke it. And people say, “Peaches, how can you like Nicki Minaj?” I’m like, no, she broke through hip-hop. She slays all these guys and they know it. It’s undeniable.

A. Yeah, make it all fluid.

Q. What kind of influence do you think Miley Cyrus and Caitlyn Jenner are having on the gender dialogue?

A. They’re just opening up the dialogue. Let’s see if it’s a trend or if we’re really gonna change things, because things are moving exponentially in every direction. I mean, we still have Kim Davis. I love that whoever wrote “Eye of a Tiger” (Survivor frontman Frankie Sullivan) sued her for using the song. I’m so happy. When she got out of jail she did this whole speech, but she’s obviously mentally imbalanced. And Donald Trump too.

And anybody who’s going by these completely heteronormative patriarchal attitudes – what are you hiding from? Not them specifically, but why do you find what I do, which is like, “Hey, let’s be open,” offensive or transgressive? It’s about being open so that everybody can actually become the person they are and feel comfortable in their own bodies. We do all these things to get away from our own bodies, but we live in them. I wrote a song called “Vaginoplasty” because people are like, “Oh, my v@gina looks horrible; I need plastic surgery on my v@gina” – not because of gender reassignment, not because of accidents, but purely for cosmetic reasons. And it’s like, “You came out of that thing – why are you so afraid of it?” It’s ridiculous to me.

It’s ridiculous how we deny our bodies and have all these stipulations and family values, which are just patriarchal family values, it seems. Like Ashley Madison websites – come on. That is not a normal way to live, where you have all these secrets because you can’t keep that front. There are urges and things we really need. Why are we denying ourselves that?

Q. There’s always been subtext to your hypersexual songs. And there are layers and layers there, and listeners can choose to dig and dig or purely see them as bedroom bump songs.

In that way, regarding multiple purposes, I relate more to female comedians like Tina Fey, Natasha Leggero, Amy Schumer, Tig Notaro and Margaret Cho because they do the same thing – they make you laugh, and then you’re like, “Oh my god, she’s right. Holy $hit. What are we really doing?” So I realize that I relate more to, actually, a lot of older female comedians and performance artists than I do musicians.

Q. When it comes to Rub, what do you want the primary takeaway to be?

A. It’s just a celebration. Seriously. I want it to be like a post-gender and post-age celebration of becoming who you are.

Q. Is it a reflection of who you are at this point in your life?

A. Definitely. Do you want to get into the breakup songs yet?

Q. Yes! Let’s talk about those.

A. Yeah, because that helped in the middle of (working on) the album. Especially a song like “Free Drink Ticket,” which is a very angry song, but it’s a real emotion that everybody can relate to. When hurt happens to someone you love the most and then it becomes complete hate. It’s amazing that someone you love becomes someone you totally wanna murder, at least for a few months.

Q. And this is how you felt after the breakup you experienced while recording this album?

A. Yeah, definitely. I think a lot of people do. “I wanna kill that person!” But then you get over it. It was an interesting twist of events, not unlike Kim Gordon or Björk – very similar situation. It was just bizarre that I was in sort of the same position; they’re both in my age range, so it was kind of like, “Wow, how am I gonna deal with this?”

Q. Have you ever had sex to your own music?

A. No! Are you crazy? That’s disgusting. Someone tried and I was like, “Forget it, buddy – get out!” Actually… it was a woman.

Q. Where can I get a knitted dick onesie like the one you and Margaret Cho wear in the video for “D!ck in the Air”?

A. A friend of mine found those, so I think you’ll have to knit one yourself. Also, I found a documentary online where they used these outfits to talk about family units, and it’s funny because they blur out the knitted penises and the knitted breasts. It’s amazing.

But what she found were five Caucasian outfits – an old man, an old woman, a young boy, a young woman and a person with both breasts and d!ck – and then there was a brown person’s costume, and a yellow one for Asian people and also a redhead with a very little weenie. Actually, the Asian one had the largest p3nis.

A. Um, very hot and sweaty. We were in L.A. I chose the old man’s outfit. I wanted to know what it’s like when your b@lls hang low.