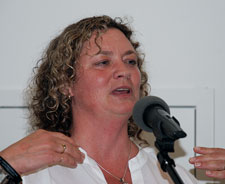 BOSTON, Mass.—For some time now, the Boston Center for Adult Education (BCEA) has found a way to celebrate its relationship with the local LGBT community. Three years ago the non-profit organization spotlighted 40 years of LGBT Pride. Last year, Bears, a subset of the gay and bisexual male community, was the center’s focus. Given its ten-year anniversary, this year’s event was a shoe-in—celebrating a decade of same-sex marriage.

Held in May at the BCAE, located in the city’s Bay Village neighborhood, the third annual “Sip the Rainbow: Preview Party & Community Celebration,” a cocktail reception, served as the opening kickoff for a photography exhibition commemorating marriage equality. Dozens of people mixed and mingled, enjoying colorful, signature mixed drinks while they viewed an extraordinary exhibit of photography that captured an historic moment in Massachusetts history.

In welcoming attendees to the opening, Susan Brown, BCAE’s executive director, said her organization views hosting such a photography exhibition as part of the non-profit’s mission. “What better way to bring people together to celebrate gay marriage,” she explained.

“[The photographers’] work profoundly documents the struggles that went on with the ruling that allowed marriages in Massachusetts, but from that point you can see the story through to the absolute euphoria of the first marriages,” said Brown. “You can absolutely feel the sentiments from the photographs that are present. Here ten years later, many of you in this room made [history]. Look how many more states were added to the fold.”  [pullquote]“I don’t have to look at the photos so much because” the images “are imprinted in my mind.”—Marilyn Humphries[/pullquote]

One exhibit, “The Hard-Won Fight: America’s First Legal Same-Sex Marriages,” features the photography of Marilyn Humphries and Susan Symonds. This collection of photos documents the dramatic and intense fight on Beacon Hill (from 2003 to 2007) and beyond in defense of the state Supreme Judicial Court’s (SJC) 2003 Goodridge decision, a landmark ruling that ushered same-sex marriage into the Commonwealth and nation.

The other exhibit, “Marriage Equality/10th Anniversary Portraits,” features the work of Joel Benjamin. His pictures are of the contemporary faces of 20 pioneering gay and lesbian couples who married in 2004 and thereby made history.

The most recent addition of Pennsylvania brings the number of states issuing marriage licenses to same-sex couples to 19, plus the District of Columbia.

Humphries, who at the time spent countless hours with cameras and photographic accouterment in arm, said she felt “a lot lighter,” adding, “I don’t have to look at the photos so much because” the images “are imprinted in my mind.” [pullquote]The other exhibit, “Marriage Equality/10th Anniversary Portraits,” features the work of Joel Benjamin. His pictures are of the contemporary faces of 20 pioneering gay and lesbian couples who married in 2004 and thereby made history.[/pullquote]

For her part, Symonds said preparing for the exhibit was “surreal, but I really valued the opportunity to go back through my files. I feel very different about some of this right now. Ten years ago, when we were steeled for battle, there was the armor that we wore. Now I’ve let my guard down and let in my vulnerability. What I have been most moved by is the abject hatred that is in some of the pictures.”

One of her photos of same-sex marriage detractors’ signage outside the State House captures the vitriol. “God hates sin,” reads one placard. Another says, “Homo sex is sin.” Still, in the same photo, other signs speak to different points of view. “All families are created equal,” reads one placard, with another adding, “No discrimination in the Constitution.”

Symonds took that photo March 11, 2004, outside the State House during a Constitutional Convention where lawmakers debated measures that would have banned same-sex marriage. [pullquote]For her part, Symonds said preparing for the exhibit was “surreal, but I really valued the opportunity to go back through my files. I feel very different about some of this right now. Ten years ago, when we were steeled for battle, there was the armor that we wore. [/pullquote]

She went on to say, “I feel overjoyed and overwhelmed with the people who had the vision and were able to say, ‘We’re going to do this.’”

Altogether, “It’s about love, about the strength of love that just pulls you through,” said Symonds.

One exhibition attendee, Connie Cervone, a lay Catholic who worked with the Religious Coalition for the Freedom to Marry (RCFM), said she was gratified to find so much backing now for marriage equality, “so many people in the country so supportive of what should have always been.”

“It’s amazing to see how right won out,” she said. “It’s beautiful to see the family photographs.”

At the same time, other photographs “take you back to the State House,” Cervone explained. “To think how hard we had to fight.”

Charles Martel, another lay Catholic associated with RCFM, said, “The photo exhibit reflected that the decision by the SJC was about real lives, giving something to so many without taking away anything from others. It chronicles the many hours of conversation, discussion, and effort to make equality the law of Massachusetts. Ten years later we recognize that so much good has come from this, building up society in many positive ways, including the impact it has had on gay youth.”

“I think it’s great to be here with your neighbors, families, and friends to celebrate ten years,” said Ed Balmelli. “It’s awesome.”

“It brings back a lot of memories,” said Michael Hogan, his spouse. “Looking at some of the pictures, I am now remembering some of the things that we were doing then, that at the time were such a blur on that day.”

Maureen Brodoff, another Goodridge plaintiff, said, “The photos are wonderful, inspiring, beautiful—all those people, all those events. So much has changed since then for the better.”

“The photos really bring back the memories,” added her wife, Ellen Wade. “The photos capture the excitement and what was happening.”

Another opening reception attendee was Arline Isaacson, who a decade ago led LGBT lobbying efforts on Beacon Hill.

“It’s great to be here to see these incredible photographs from a time that was so emotional and powerful and so intense, so historic,” Isaacson said. “Going from photo to photo is like a flashback. Some of them are pure joy. Some are painful because it was painful, but we came out of it all in such a positive, wonderful way.”

Just back from spending winter in Hawaii, Pat Gozemba said that she was delighted to be home in Massachusetts “where equality has been recognized for so long.”  Not so in the Aloha State, she explained, “Where we had to fight to get civil unions, had to struggle again to get marriage equality, had to struggle with the right wing.”

“Although Hawaii is generally very liberal and accepting,” Gozemba added, “they really took a long time to come around to accept the LGBT community. Ironically, transgender people are accepted much more really in Hawaii than LGBs.”

Gozemba and her wife, Karen Kahn, are authors of the 2007 book, Courting Equality: A Documentary History of America’s First Legal Same-Sex Marriages. The book features Humphries’ photography. [pullquote]Just back from spending winter in Hawaii, Pat Gozemba said that she was delighted to be home in Massachusetts “where equality has been recognized for so long.”[/pullquote]

For her part, Rabbi Devon Lerner, who ten years ago served as RCFM’s executive director, said what struck her most from the photographs “was the smiles on the faces” of marriage supporters, but also equality detractors’ angry faces from the demonstrations on Beacon Hill to various churches.

“All that anger and energy and how it took so many people, so many difficult parts of our community to make this happen,” she said. “I am so grateful.”

BCAE’s opening reception also drew representatives of the Boston house of the Sisters of Perpetual Indulgence, a troupe of nuns in drag, which is also a non-profit charitable organization of and for the LGBT community. On hand were Sister Rosetta Stone, Lida Christ, and Gloria LeLuia.

The Sisters of Perpetual Indulgence are one of the Grand Marshals for this year’s Boston Pride parade, along with Massachusetts Gov. Deval Patrick and Honorary Marshal, the late John Mitzel.

Boston Mayor Martin J. “Marty” Walsh also sent his LGBT community liaison to the Sip the Rainbow event. For her part, Jullieanne Doherty presented a mayoral Certification of Recognition that noted BCAE’s photo exhibit as a “unique opportunity for reflection and celebration by all citizens” of Boston and beyond.

The photography exhibits will be up until June 30 and are available for viewing when the BCAE, located at 122 Arlington Street in Boston, is open. Check the center’s website, www.bcae.org, for more details. The exhibits are free to the public.