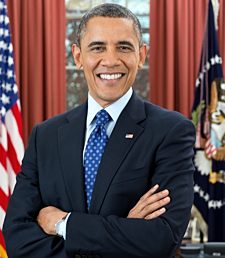 Remarks made from the Rose Garden

THE PRESIDENT:  Good morning.  Our nation was founded on a bedrock principle that we are all created equal.  The project of each generation is to bridge the meaning of those founding words with the realities of changing times—a never-ending quest to ensure those words ring true for every single American.

Progress on this journey often comes in small increments, sometimes two steps forward, one step back, propelled by the persistent effort of dedicated citizens. And then sometimes, there are days like this when that slow, steady effort is rewarded with justice that arrives like a thunderbolt.

This morning, the Supreme Court recognized that the Constitution guarantees marriage equality. In doing so, they’ve reaffirmed that all Americans are entitled to the equal protection of the law. That all people should be treated equally, regardless of who they are or who they love.

This decision will end the patchwork system we currently have. It will end the uncertainty hundreds of thousands of same-sex couples face from not knowing whether their marriage, legitimate in the eyes of one state, will remain if they decide to move [to] or even visit another. This ruling will strengthen all of our communities by offering to all loving same-sex couples the dignity of marriage across this great land. [pullquote]And this ruling is a victory for America. This decision affirms what millions of Americans already believe in their hearts: When all Americans are treated as equal we are all more free.[/pullquote]

In my second inaugural address, I said that if we are truly created equal, then surely the love we commit to one another must be equal as well. It is gratifying to see that principle enshrined into law by this decision.

And this ruling is a victory for America. This decision affirms what millions of Americans already believe in their hearts: When all Americans are treated as equal we are all more free.

My administration has been guided by that idea. It’s why we stopped defending the so-called Defense of Marriage Act, and why we were pleased when the Court finally struck down a central provision of that discriminatory law.  It’s why we ended “Don’t Ask, Don’t Tell.” From extending full marital benefits to federal employees and their spouses, to expanding hospital visitation rights for LGBT patients and their loved ones, we’ve made real progress in advancing equality for LGBT Americans in ways that were unimaginable not too long ago.

I know change for many of our LGBT brothers and sisters must have seemed so slow for so long.  But compared to so many other issues, America’s shift has been so quick. I know that Americans of goodwill continue to hold a wide range of views on this issue. Opposition in some cases has been based on sincere and deeply held beliefs. All of us who welcome today’s news should be mindful of that fact; recognize different viewpoints; revere our deep commitment to religious freedom.

But today should also give us hope that on the many issues with which we grapple, often painfully, real change is possible. Shifts in hearts and minds is possible. And those who have come so far on their journey to equality have a responsibility to reach back and help others join them. Because for all our differences, we are one people, stronger together than we could ever be alone. That’s always been our story. [pullquote]There’s so much more work to be done to extend the full promise of America to every American. But today, we can say in no uncertain terms that we’ve made our union a little more perfect.[/pullquote]

We are big and vast and diverse; a nation of people with different backgrounds and beliefs, different experiences and stories, but bound by our shared ideal that no matter who you are or what you look like, how you started off, or how and who you love, America is a place where you can write your own destiny.

We are a people who believe that every single child is entitled to life and liberty and the pursuit of happiness.

There’s so much more work to be done to extend the full promise of America to every American. But today, we can say in no uncertain terms that we’ve made our union a little more perfect.

That’s the consequence of a decision from the Supreme Court, but, more importantly, it is a consequence of the countless small acts of courage of millions of people across decades who stood up, who came out, who talked to parents—parents who loved their children no matter what. Folks who were willing to endure bullying and taunts, and stayed strong, and came to believe in themselves and who they were, and slowly made an entire country realize that love is love.

What an extraordinary achievement. What a vindication of the belief that ordinary people can do extraordinary things.  What a reminder of what Bobby Kennedy once said about how small actions can be like pebbles being thrown into a still lake, and ripples of hope cascade outwards and change the world.