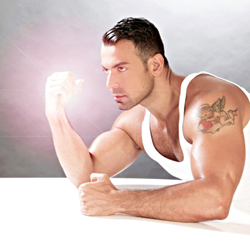 Raph Solo, who underwent reparative therapy trying to make amends with his religious beliefs, came back from that experience stronger, gayer and with a brand new hit.
Photo by: Michele Martinoli

“It takes me a long time to accept that a relationship has ended,” admits Raph Solo, whose single “Finally,” the title track and third release from his album burst onto the Top 40 charts in the UK last month. He unleashes the fourth track from the album, “Brand New Dime,” in September.  “I often find myself trapped in a dark place where I know I have to move but I can’t break free from my emotional prison. I’ve learned that it takes time to heal.  Eventually, the days begin to glow a little brighter until finally, I am once again shining again like a brand new dime.”

On paper – and in the pages of magazines in which Raph, a working model, frequently appears –Raph seems to have it all: great looks, a killer body, and a confident smile.  However, as an artist whose music often reflects the turbulence of his life’s journey, Solo has confronted many of his struggles publicly on the world stage. He most recently revealed how he underwent reparative therapy in an attempt to cure his homosexuality.

“I learned about reparative therapy online and thought, “why not give it a try? Maybe it would be the answer to all of my troubles. I feared God was angry with me for having chosen to be gay.”

He followed the reparative steps, including abstaining from sex for six months. He also traced events back to his childhood and was amazed at how closely he fit the mold of a child predisposed to homosexuality.  In addition to an early obsession with Tarzan, he grew up an only child, smothered and preened into a mommy’s boy. According to his doctors, the domineering mother figure led to Raph’s deficit in masculine identification, which they believe is the root of all homosexuality. It resulted in his father being emotionally distant and young Raph’s feelings of rejection. To compensate for the loss of his father’s love, said his doctors, the adult Raph sought love from other men.

Attraction to women not as easy

“I found some of the reasoning behind what makes people gay to be enlightening,” says Solo.  With considerable mental effort and programming, he did experience some attraction to girls, but not much. “It wasn’t sexual enough to conduct a functional heterosexual relationship,” he explains.

“I kept thinking, what about the girl’s feelings? Doesn’t she deserve a guy who is totally into her? I couldn’t use anyone as a Guinea pig in my heterosexual experiment.”

Ultimately, Raph came to understand that changing into a straight man would not make him a better person.  He had to acknowledge himself as gay, even if it has meant rough sailing in love.  And for Raph, who has had six serious relationships in eight years that all ended unfavorably, it has been difficult.

“I found the perfect love of my dreams and when he jumped ship, it left a big hollow hole in my heart for a very long while.”

The singer acknowledges his looks have been a stumbling block to his finding love. “It’s happened over and over again where everything starts off wonderful. The guy initially loves the attention we get as a couple. Then, he starts to trip with all the advances that come. Suddenly, he grows insecure and starts treating me like shit. He thinks ‘maybe if I treat him badly, I will keep him interested.’ But he forgets that in my eyes, he is the most beautiful man in the world and I only want to be with him and I can’t understand the drama that is inexplicable and unnecessary. Underneath it all, this so-called model is just another guy who wants to be loved.”

Working with the damages of reparative therapy

Solo was more emotionally prepared after this last break-up, due to the professional cognitive behavioral therapy he underwent to counteract the damage done from his reparative exercise.  Therapy taught him to stay calm, keep cool and collect his thoughts. He now ventures to look for the positive in a situation and not let himself get disenchanted by the negative.

“I am finally happy in myself as a person. I do not feel I need the attention, affection and approval of a guy to be complete. I have come into myself as a man,” he says.

Closer to God and looking for the right man

He no longer sees an issue with God and being gay anymore, either. He has come to believe that everyone has a right to live freely and honestly.

The search for Mr. Right continues, but if he never finds him, at least Raph will die trying which he says is much better than not believing. “I am having a great time with Mr. Right Now,” he laughs.

And his journey makes for some great ballads. “By keeping my message real, fans are able to relate to my music,” he says.

His new single is about re-birth, because after the darkest hour of night always comes the light of dawn. And as the new day begins, Raph Solo is sure to shine like a brand new dime.