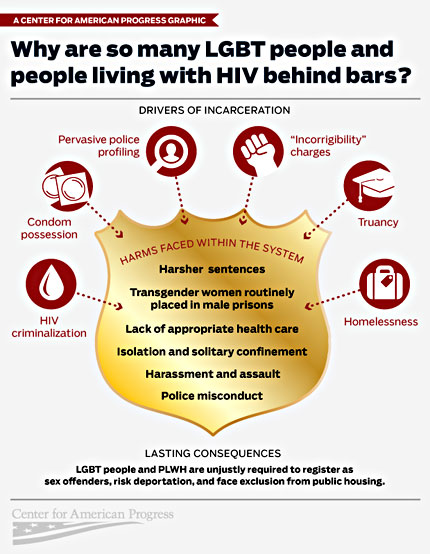 For a brief commentary on the Roadmap report, read the May 9 op-ed HIV Can Still Land You in Jail by Catherine Hannsens on Advocate.com. An infographic from the Center for American Progress, Why Are so Many LGBT People and People with HIV Behind Bars?, also depicts the drivers of incarceration and its consequences. [pullquote]”Hispanic lesbian, gay, bisexual, transgender (LGBT) older adults are not well understood by the nation’s service providers, or by local, state, and federal governments. There is limited available research on this diverse population,” notes the recent report, In Their Own Words: A Needs Assessment of Hispanic LGBT Older Adults. [/pullquote]

“Hispanic lesbian, gay, bisexual, transgender (LGBT) older adults are not well understood by the nation’s service providers, or by local, state, and federal governments. There is limited available research on this diverse population,” notes the recent report, In Their Own Words: A Needs Assessment of Hispanic LGBT Older Adults. To address this knowledge gap, the National Hispanic Council on Aging (NHCA) in partnership with SAGE conducted a literature review, convened focus groups, and conducted key informant interviews with LGBT Hispanic older adults around the U.S., as well as with the providers who serve them. The goals of this work were to increase understanding of the status of Hispanic LGBT elders and the challenges they face.

Key findings of the 48-page report include:

Isolation and marginalization: “As they age, many LGBT Hispanic older adults feel excluded and isolated. This danger is compounded by the prejudice and discrimination that many suffer for being members of both a sexual minority and an ethnically marginalized group.”

Family and faith: “Hispanic cultures place a strong value on family, which is of central importance in the lives of many Latinos of all sexual orientations and gender identities. LGBT Hispanics, however, can become estranged from relatives who exhibit bigotry, condemn their sexualities on religious grounds, or simply fail to show understanding.”

Employment: Hispanic LGBT elders commonly reported experiencing discrimination in both employment and housing. “Though such discrimination is prohibited by law in some states and localities, it is still a fact of life for many people, and can occur in both overt and subtle ways that are hard to document and to address.”

Relationships with service providers: The report notes that it is “tremendously important” that social service and healthcare providers “have an understanding of the LGBT community, and demonstrate respect and cultural competency . . . With education, understanding, and respect, service providers can make important strides to delivering services in a culturally competent manner and effectively addressing the needs of the diverse LGBT Hispanic older adult population.”

“Despite major developments in HIV/AIDS prevention, treatment, and research in 2013, cable evening news shows devoted scant time to covering developments in the fight against HIV/AIDS in 2013,” according to a media content analysis conducted by Media Matters for America. “The lack of coverage of HIV/AIDS stories has continued into the first quarter of 2014.”

Primary care providers who provide clinical HIV care (HIV PCPs) are experiencing rising HIV caseloads from newly insured patients under the Affordable Care Act (ACA), according to a national survey released earlier this month by HealthHIV in Washington, D.C. Forty percent of the survey participants said that the number of providers who treat HIV in their area is inadequate to meet the demand. In addition, half of HIV PCPs say their HIV caseloads have grown, “a trend likely to continue as health reform steers patients to primary care settings,” HIVHealth notes.

According to HealthHIV’s Third Annual State of HIV Primary Care National Survey, a majority of HIV PCPs are female, 54% are physicians, and 55% are over the age of 50. These PCPs work primarily in urban or metropolitan areas and are more likely to treat underserved populations, including racial and ethnic minorities, homeless persons, and immigrant populations. “Nearly half (49%) of PCPs surveyed do not provide clinical HIV care; they cite a lack of knowledge about HIV treatment as a significant barrier to providing care. A similar number (48%) say they need more clinical training to fully integrate HIV care into their practice.”

The survey suggests that training and mentoring programs would help reduce significant gaps identified in the survey, including:

Although 89% of HIV PCPs surveyed test patients for HCV, far fewer (59%) actively manage co-infection. More than a quarter of HIV PCPs have seen an increase in the number of patients with HCV co-infection, and 40% said that managing HIV-HCV coinfection is their greatest educational need.

The full survey report also includes sections on clinical testing and HIV treatment services, provider and patient barriers to HIV care, as well as provider perspectives on a number of issues, including retention in care, the integration of HIV into primary care, and health reform initiatives.

On May 1, Iowa became the first U.S. state to pass legislation softening its HIV criminalization law. The move follows a recent report in which the U.S. Centers for Disease Control (CDC) and U.S. Department of Justice called on states with HIV criminalization laws “to re-examine those laws, assess the laws’ alignment with current evidence regarding HIV transmission risk, and consider whether current laws are the best vehicle to achieve their intended purposes.”

After both chambers of the Iowa legislature voted unanimously to approve the bill, it was sent to Governor Terry Branstad, who has 30 days to sign or veto the legislation. According to the Center for HIV Law and Policy (CHLP), a group advocating the repeal of HIV criminalization laws, the bill makes “significant improvements” to Iowa’s HIV-specific criminal law by:

However, CHLP also asserts that the Iowa bill should not be considered model legislation on the issue of HIV criminalization and identifies what it considers to be serious shortcomings of the legislation. In particular, the Iowa bill:

For more information, you can read the full text of the bill, a CHLP statement critiquing the bill, or a statement by the Sero Project, a group that advocates for an end to “inappropriate criminal prosecutions of people with HIV for non-disclosure of their HIV status, potential or perceived HIV exposure, or HIV transmission.”