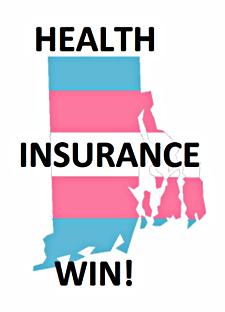 Yesterday, the Rhode Island Office of the Health Insurance Commissioner released a bulletin Regarding Prohibited Discrimination on the Basis of Gender Identity and Expression. The bulletin is a significant step toward increasing access to critical health care for transgender residents of Rhode Island, who have long been arbitrarily denied coverage for medical treatments related to gender transition.  Insurance companies will have 90 days to implement the changes.

The bulletin is the result of years of advocacy by TGI Network of Rhode Island, Gay & Lesbians Advocates & Defenders and many community partners, to educate state leadership on the needs of the transgender community.

“This is a monumental moment for trans* rights in the state of Rhode Island” stated Ethan Huckel, board president of TGI Network of Rhode Island. “Combined with the announcement about updated Medicaid policies regarding Gender Dysphoria three weeks ago, the state of Rhode Island is sending the message loud and clear that transgender people are valued in our community and that the state will no longer tolerate systemic discrimination in health care access for transgender people. We would like to thank Governor Gina Raimondo for her strong support and leadership on this issue.”

“We applaud the Insurance Commission for helping to remove unprincipled and medically unsound barriers created by insurance companies that keep transgender people from getting the medical care they need and deserve,” said Jennifer Levi, director of GLAD’s Transgender Rights Project.

Rationale for the ruling cited the Affordable Care Act and Rhode Island’s strong non-discrimination laws protecting gender identity and expression which have been in place since 2001; Rhode Island was the second state in the country to enact such protections.