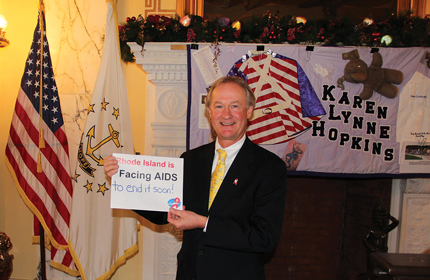 PROVIDENCE, Rhode Island — December 31 marked the end of Rhode Island’s federal funding for community-based HIV prevention and education programs in the state. Thereafter, RI state funds for HIV will only go toward testing and those already living with the virus and not toward prevention funding. In spite of that, HIV averages 100-125 new infections each year in RI within the last decade, according to an Epidemiology profile published by the Rhode Island Department of Health.

“Because we’re a smaller state, the cuts are really going to be shaking the nonprofits that have been kind of championing the work for the best 10 or 12 years,” explained Adeola Oredola, Executive Director, Youth In Action RI. “Huge, huge chunks of money are completely disappearing from our State Department of Health and it’s going to hurt youth programs [and] all different populations.”

Nothing like this has ever happened before in terms of federal funding, confirmed Oredola on a telephone call with The Rainbow Times. Previously, the Rhode Island Department of Health funded many primary prevention programs, therefore creating a brand new set of challenges for these nonprofits.

community health work. Hopefully with the support of our friends we can continue to do that at some level,” continued Oredola.

The support, advocacy and education center, Youth Pride Inc., had initially received a three-year grant from the RI Department of Health. The money was set to go toward a program called the Mpowerment Group, where LGBT youth would learn about HIV prevention and safe sex through community building events, explained Kerri Kanelos, Executive Director of Youth Pride Inc., and said the goal was to educate five youth leaders to teach their peers, as well as staff person to oversee them.

In the grant’s starting year, 2011, the organization received $90,000 toward the project. Then in its second year, 50 percent of the budget was cut, followed by a complete loss of funding in 2013. As a result, Kanelos said the organization has reached out to the best places it could think of, Elizabeth Taylor’s AIDS Foundation, Elton John’s AIDS Foundation and even local RI charities, to try to recover from lack of RI Department of Health funding.

“It was a big surprise to us … When we initially went for the funding we saw it as something that was much more stable than what it has turned out to be,” said Kanelos. “The minute we heard that year three wasn’t going to happen, and there was a cut in year two, we started looking for private foundation money.”

In an effort to get past these budget cuts and combine efforts, the RI HIV Prevention Coalition was formed about a year ago, explained Kanelos, and contains more than 20 community groups. The Coalition’s mission statement reads, “a forum for community-based organizations and other agencies in RI to work together to prevent HIV through sharing information, doing advocacy, strengthening partnerships and raising public awareness.”

The Coalition recently held a large meeting in celebration of World AIDS Day. The event took place during midday in the State Room of the RI State House, with about 40 attendees. Those present were graced with the words of Governor Lincoln Chafee, U.S. Senator Sheldon Whitehouse and RI House Speaker Gordon Fox.

Kanelos attributes the Coalition’s strong public efforts to Thomas Bertrand, who is also the Executive Director of AIDS Project RI. “We’re still formalizing our relationships … it is a member-driven network of organizations,” said Bertrand.

The next RI HIV Prevention Coalition meeting will be open to the public, and will be held from 9:30 a.m. to 11 a.m. on January 16. The location has not yet been determined. For more information, please contact Thomas Bertrand at Thomas@aidsprojectri.org or join the “Rhode Island HIV Prevention Coalition” Facebook Page, http://tinyurl.com/a2ygd36.