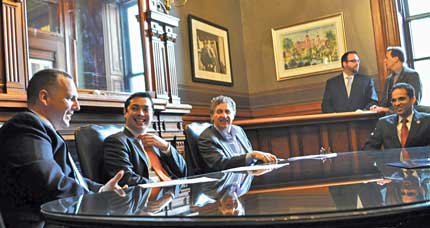 The freedom to marry for same-sex couples is only recognized in ten states and the District of Columbia. While there is national attention on the federal cases of marriage equality, mayors from all across Rhode Island recently joined the Mayors for the Freedom to Marry campaign. Rhode Island was the only state in New England that does not yet issue marriage licenses to same-sex couples, although the legislation has recently passed in the Senate and will move to the House.

“By announcing their support of marriage, mayors from Rhode Island are joining the chorus of American voices across the country that understand why marriage matters to same-sex couples and their families,” commented Marc Solomon, National Campaign Director for Freedom to Marry. “Mayors are uniquely equipped to explain why marriage improves the quality of life for their constituents, to share their own support for marriage with other elected officials and to show how marriage makes cities and towns economically stronger.”

Freedom to Marry is the campaign to win marriage nationwide, explained Solomon. Freedom to Marry drives the national strategy to ensure that same-sex couples in loving and committed relationships can marry in all fifty states, and that all marriages are treated equally under the law throughout the United States. [pullquote]“By announcing their support of marriage, mayors from Rhode Island are joining the chorus of American voices across the country that understand why marriage matters to same-sex couples and their families,” commented Marc Solomon, National Campaign Director for Freedom to Marry.[/pullquote]

“Mayors for the Freedom to Marry is a nonpartisan, growing coalition of over 350 mayors from 35 states across the country who are making the case for marriage in their communities,” he added.

Mayor Angel Taveras of Providence, one of six Rhode Island mayors to join the coalition, recognized the contribution of same-sex couples to his community.

“Gay and lesbian Rhode Islanders reside in every city and town in our state, including our capital city of Providence,” he stated. “They contribute to our communities as business owners, doctors, teachers, coaches, civic leaders and good neighbors. Providence derives great strength from our diversity, and gay and lesbian families are a crucial part of that.”

Taveras argued for the fundamental fairness inherent in the freedom for couples to marry on behalf of his constituents.

“My community joins with me in supporting fair and equal treatment and protection under the law for every citizen,” Taveras commented about the support he has received from the residents of Providence. “Marriage gives couples the tools and the security to build a life together, to care for each other and to protect their families. Couples benefit from the peace of mind knowing that their families are safe and secure, and so do the communities in which they live.”

The other mayors joining the cause, unavailable for comment, include Mayor Scott Avedisian of Warwick, Mayor Daniel McKee of Cumberland, Mayor Donald Grebien of Pawtucket, Mayor James Diossa of Central Falls and Mayor Charles Lombardi of North Providence.

For more information about Mayors for the Freedom to Marry, visit www.freedomtomarry.org.