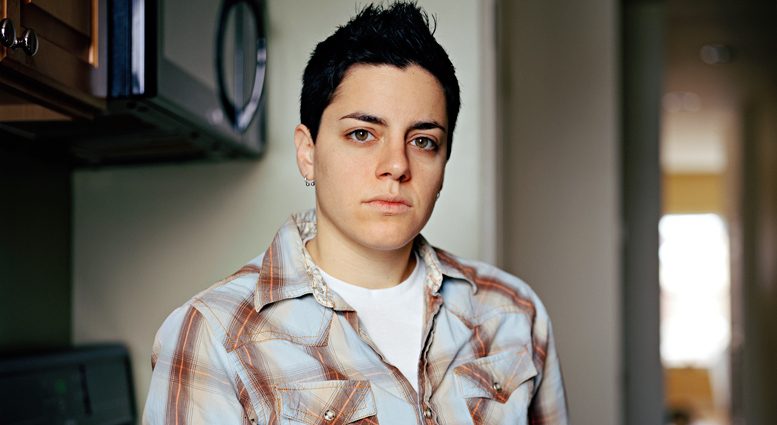 There’s a photograph of Jess T. Dugan from 2005 with bandages over where her breasts used to be. She’s standing nude beside her mother and the two are pillars. The photo is a powerful declaration of self—recognizing it, embracing it.

“I have always used photography to understand myself and my place in the world,” Dugan says. “At that time I used my work to come to terms with my body and my gender. Those earlier pictures were very much about, ‘This is my body, this is my gender, this is my mother, this is my community.’”

Community was a harder find in high school. And so were gay people, and so were butch women. Back then, Dugan found her people solely through photography books she sought out in stores throughout Boston’s Harvard Square, where she first discovered the true power of portraiture. There, she immersed herself in “really influential” collections featuring images by Robert Mapplethorpe and Catherine Opie, a photographer known for exploring Los Angeles’ leather-dyke community in her portraits.

For a decade, Dugan’s photographs have explored gender, sexuality, identity and community, capturing the essence of transgender men and women, with a focus on aging adults in the last few years. Her staggering breadth of work has been exhibited internationally at establishments such as the Smithsonian National Portrait Gallery, the Grey House Gallery in Poland, the Leslie/Lohman Museum of Gay and Lesbian Art, and at many colleges and universities nationwide. In addition, her photographs have colored the pages of the New York Times, The Advocate and the Boston Globe.

And she’s worked for it, earning her BFA in photography from the Massachusetts College of Art and Design, an MFA in photography from Columbia College Chicago and also a Master of Liberal Arts in museum studies from Harvard University. In 2015, the fruits of her labor were recognized in a big way when the White House named Dugan a Champion of Change. The nomination came via Jennifer Levi, director of the Transgender Rights Project at Gay & Lesbian Advocates & Defenders. Prior, Dugan took portraits of transgender people for a book that Levi co-edited called “Transgender Family Law: A Guide to Effective Advocacy.”

“I am a huge fan of Jess’ work,” Levi says. “I helped to curate a show Jess did in western Massachusetts several years ago and was impressed with how her art touched a wide range of people. It was especially important for transgender and gender nonconforming people to see their faces and bodies included in portraits. Jess’ work captures the diversity and humanity of the community.”

For Dugan, it’s “because of my own identity and my community.”

“Deeply, at the core,” she continues, “I’m interested in people and identity and kind of how we each come to be who we are and then how other people perceive us as that person that we know ourselves to be.”

At 13, Dugan came out as gay. Five years later, after questioning her gender throughout her mid teens, she underwent “gender-affirming chest reconstruction surgery” to remove her breasts. Currently, she identifies as queer.

Dugan is 29 now, and her artistic scope has broadened beyond herself, while also being “deeper and more subtle” in her approach to identity and sexuality. “Those issues are still there,” she attests, “but it’s not always my primary need to assert my own identity over and over.”

Instead, Dugan has turned the lens outward, using portraiture to spotlight a niche transgender demographic. Her photographs of transgender people over 50 are honest, empathetic, bold and beautiful. And in the case of Stephanie James, frighteningly real.

“I was a little shocked actually,” says James, 66, of St. Louis, Missouri. “I’ve seen zillions of photos of myself since coming out, and I thought I looked pretty old and like a caricature of myself. Jess caught me just as I was.”

Even before Dugan met her partner, Vanessa Fabbre, in 2012, her interest in portraying people’s authentic self was evident in “Every Breath We Drew,” a project she started in 2005 that examines masculinity in queer communities (a monograph of the project, her first, was published in 2015 by Daylight Books). But upon meeting Fabbre, a college professor whose research is centered on the intersection of aging and LGBT identity, Dugan narrowed her focus to older transgender and gender-variant adults. Dugan worried that concentrating only on transgender people of a particular age was too specific, but that concern was quelled when she made this surprising revelation: There are young trans people who’ve never seen a photograph of an older trans person.

“They didn’t know what they’d look like as they got older,” she says. “Because of the aging component, people who know 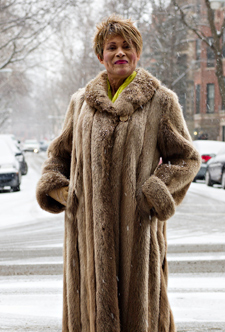 For “To Survive on This Shore,” Dugan has made 50 portraits in total, with 11 more scheduled – so far anyway. Shooting across the United States, in cities like Atlanta, New York, Baltimore and Washington D.C., Dugan has met a melting pot of people she says she never would have otherwise. Her subjects share intimate identity stories. Their struggles. Their triumphs. On several occasions, she’s photographed men who medically transitioned in the early 1970s, which, for her, was “amazing because I had never known anyone that had transitioned before maybe the late ’90s or early 2000s.”

“I think just the whole experience has been moving and has been inspiring to me,” Dugan muses, “and really I’m kind of in awe of the strength that each person has. A lot of these stories would be untold or kind of invisible if we weren’t trying to capture and preserve them.”

*Chris Azzopardi is the editor of Q Syndicate, the international LGBT wire service. He once made Jane Fonda cry. Reach him via his website at www.chris-azzopardi.com and on Twitter (@chrisazzopardi).