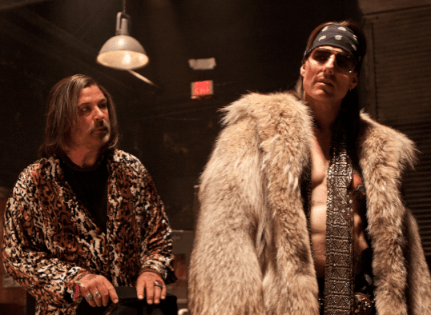 Alec Baldwin and Tom Cruise in a scene of Rock of Ages. Photo by: Warner Bros

Alec Baldwin and Tom Cruise in a scene of Rock of Ages. Photo by: Warner Bros

How do you come off a musical that has John Travolta doing drag? You make sure the next one, Rock of Ages, gets Tom Cruise in butt-baring chaps.

“I thought we would cover it up with mesh or underwear,” recalls director Adam Shankman, “and I was like, ‘You do know that when I’m shooting, we’re gonna see your ass? He said, ‘Well, how is it?’ And I go, ‘It’s fantastic.’”

Tom’s response? “Then let’s shoot it.”

The all-star cast of Alec Baldwin, Russell Brand, Catherine Zeta-Jones and romantic leads Julianne Hough and newcomer Diego Boneta, already a famed heartthrob in Mexico, had a similar no-holds-barred attitude for the big-screen adaptation of the Broadway musical homage to the crazy ’80s. From a suite at The London West Hollywood, close to the Sunset Strip where the film takes place, Shankman told us why: “It’s my conviction that it’s all good, clean fun. You can’t tell a joke halfway and get away with it – you have to go for it. You can’t be afraid. Go big or go home.”

Rock of Ages goes big every chance it has: Cruise, in grunge-rocker mode as Stacee Jaxx, and co-star Malin Akerman, the nosy Rolling Stone reporter, have a cheeky rendezvous to “I Want to Know What Love Is”; Zeta-Jones, a closeted rocker who tries to take down the demoralizing genre, goes back to her musical roots for her hammed-up take on “Hit Me with Your Best Shot.” And then there’s the lovey-dovey Baldwin-Brand montage … that ends in a kiss.

“It’s sweet,” Shankman says of the scene, set to REO Speedwagon’s “Can’t Fight This Feeling.” “People want them to get together. People are proud that we live in a world where that can happen, and I’m not trying to sell anything. I’m just expressing this relationship; in their dark moment they find each other, and that bolsters them as characters. I wouldn’t know how to tell that story without it going to that place.”

The creators of the original musical didn’t see their bond the same as Shankman. To them, it was just two dudes who really, really like each other. A lot.

“Interestingly, on the surface, it actually does not veer from the play – but I was told by the creators of the play that they, in fact, never saw them as falling in love,” Shankman says. “They just said it was the ultimate bromance and I said, ‘That is the ultimate bromance – them falling in love.’ Alec Baldwin and Russell Brand are singing ‘ … I can’t fight this feeling anymore.’ I don’t think guys fight the feeling of being friends.”

The mini-golf flashback, though? That was all Shankman.

“Standing behind the other and teaching him how to putt and sinking a ball into a hole is … something,” he laughs. “All puns intended.”

Though Tom Cruise is getting the most buzz for his rock-god role, Shankman started with a musician who has, oh, just nine Grammys to her name: Mary J. Blige. The soul diva was approached nearly two years ago at a housewarming party for Jennifer Lopez that both were attending. Shankman said he wanted her in his movie; Blige thought he was full of crap.

“People say things,” she says, “but they don’t deliver. Six months later he showed up with this script. He believed in me.”

His other reasons? “Because I’m a gay man and she’s Mary J.”

Blige plays nurturing strip club owner Justice, the mother hen of the movie that has a bigger wardrobe – and more wigs – than an episode of RuPaul’s Drag Race. “The giant hair, the braids, the beads, just the freedom and expression,” Blige says of why gays will dig her role. “The gay community is about freedom and expression. They hold nothing back; they just are what they are, and that’s what I believe they will take away from seeing Justice.”

For the role, she threw on a Mississippi accent and completely re-imagined her character so she could get outside herself. As someone who’s overcome plenty of drama in her own life, Blige had a lot to work from already.

“I didn’t want her to be Mary, but I used Mary’s life experiences and who Mary is in real life to build her character, which is this woman who always encourages other women to feel better, be better and just be an example and kind of mother the younger women.”

On set, that “example” was Shankman, who was so dedicated to his work that he was always working from a choreography warehouse with no air conditioning – just a table and a folding chair. Boneta doesn’t recall ever seeing him at the swanky production office.

“That’s how involved he was,” Boneta says. “He was in the trenches, working, just as much as any one else was. When you have someone like that directing you, you can see that onscreen.”

Somehow, too, Shankman does it all with an infectious smile. On this morning, after an emotional night at a Trevor Project screening of the film, it’s surprising to see Shankman so chirpy. “He looks like a bird when he walks, and I love it,” says Hough, looking at Diego and laughing. “He’s so happy, though, and he really loves what he does and that just translates to his work – but also to us. Everybody has to be around him every single day, and to have that kind of energy is pretty great.”

Acid wash, mullets, parachute pants – the jokes in Rock of Ages write themselves. “The period makes fun of itself, for god’s sake,” Shankman says. “You don’t have to go out and try to make fun of the period. Shoulder pads – come on!”

That was his advice to Baldwin and Brand, who were told to acknowledge their relationship not as a joke but as if they actually were falling madly for each other.

Part of the reason he went all the way with it – further than the original musical, anyway – is because of John Waters. In fact, many of the liberties Shankman took with Rock of Ages are because of the iconic filmmaker.

When Shankman was originally commissioned to do Hairspray, casting John Travolta in the role of Edna Turnblad for the 2007 movie, he asked for Waters’ blessing. After some email correspondence, the two met up in Waters’ hometown of Baltimore, where Shankman was filming Step Up, and Shankman remembers his advice: “You have to tell the story through your own filter, otherwise it will be a disaster. You can change anything as long as you make a good movie.”

“The courage to do it all came from John Waters,” says Shankman, noting that both Hairspray and Rock of Ages beat from the same heart. “What the movies share at their fundamental core are a couple of things: nothing is worth anything without love; not comprising yourself, and consequences to comprising yourself; and you can’t stop the beat – no matter what, you can’t stop people from expressing themselves creatively. They’re strangely kindred.”

But Rock of Ages doesn’t stop there: It’s also about reckless abandon, and the music of that time is a nostalgic reminder of how hang-loose people were. The 47-year-old director, who grew up in L.A., graduated in 1982 and, though this generation will find it hard to believe, couldn’t escape MTV’s constant looping of actual music videos: “Hot for Teacher,” “Pour Some Sugar on Me” and Whitesnake songs among them.

“Whether or not you had them in your Walkman, they were everywhere,” he recalls. “I watched MTV News; that was my go-to news channel. This music is so entrenched in our lives that I wanted to honor that.”

Not just the music, but also the fact that people were so blithely unconcerned about … everything. Talk about an age that rocked. “That period was the last time this friggin’ country was innocent,” he continues, “because you had all the sex you wanted, there was no AIDS; you could do all the drugs you wanted, there was no rehab; you could throw TVs out of windows of hotels and people loved it.”

Shankman’s upcoming projects won’t be so happy-go-lucky: The novel-based This Is Where I Leave You reteams the director with Zac Efron, who starred in Hairspray, as a deceptive bad guy. The director said the film, also featuring Jason Bateman and Goldie Hawn, was his calling. “It’s the most beautiful script I’ve ever gotten,” he says. “I had to wrestle it out of another director’s hand, literally. I needed to make this movie.” The So You Think You Can Dance guest judge is also adapting The Nutcracker into a journey of self-discovery seen through the dark-fantasy lens of Tim Burton.

His other project might not ever surface: “I’ve outlined and started to write a movie on all my gay experiences in a 48-hour period. If it never sees the light of day, so be it, but I’m feeling the need to write it. It’s me continuing to wrestle with whatever gay demons I have and needing to explore them and put them on the page.”

If it does, the big question is: Who can top Tom Cruise?

*Chris Azzopardi is the editor of QSyndicate, the international LGBT wire service. Reach him via his website at www.chris-azzopardi.com.