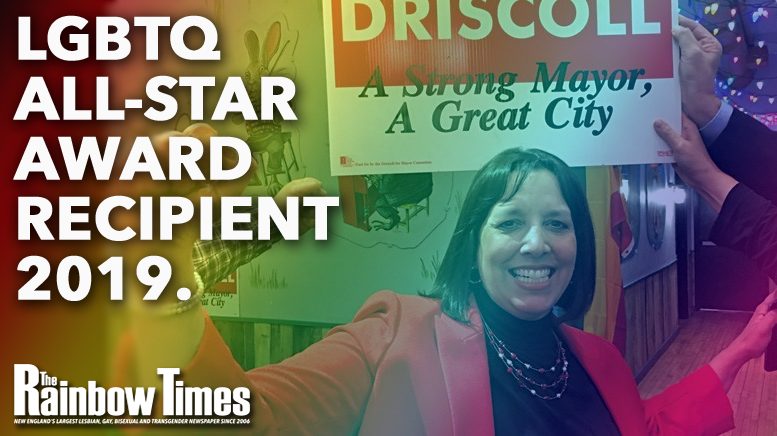 SALEM, Mass.—Salem Mayor Kim Driscoll has been selected to receive the 2019 LGBTQ All-Star Award presented by The Rainbow Times, according to the publication’s management.

“I am so grateful to The Rainbow Times for this distinction and would like to thank their staff for their own advocacy and dedication to equal rights and an inclusive, welcoming community,” said Mayor Driscoll to the LGBTQ award-winning publication.

The editor of the monthly publication, Nicole Lashomb, praised Driscoll’s LGBTQ advocacy through the years.

“Mayor Driscoll has been relentless in her support and advocacy work for and on behalf of LGBTQ residents in the city of Salem and beyond to ensure there is the equality for all of our community, even lending her own voice to uplift it,” said Lashomb, who is also The Rainbow Times’ co-founder. “We are thrilled to present her with this year’s LGBTQ All-Star Award.”

In typical “Driscoll style,” the Mayor praised Salem’s success and triumphs to a collective effort, not just her doing.

“Our efforts in Salem have been a team effort and includes many volunteers, City staff and officials, and other partners,” she said. “I’m so proud that The Rainbow Times is one of those partners, advancing this important work for our city and for our Commonwealth.”

“The mayor has advocated for all members of the LGBTQ community, including those most vulnerable and often left without a voice,” said Lashomb. “Her visible and public support of Yes on 3 to uphold transgender public accommodations protections, for example, is evidence of that. We don’t only look for allies of the LGBTQ community to recognize but specifically, we seek out those who publicly voice support of it. The mayor has done that in countless ways.”

The publication’s leadership, out of their 2nd office in Salem, Mass., has witnessed first hand the dedication and impact the Mayor has had on community members.

“Mayor Driscoll has unequivocally shown her presence and support of—literally and symbolically—the LGBTQ community, its youth, etc., and her leadership extends nationally when we can all see the city’s perfect score on the Human Rights Campaign Municipal Equality Index scorecard, several years in a row now,” said Graysen M. Ocasio, Publisher of The Rainbow Times and Co-ED of Project Out (a transgender services non-profit organization). “The city’s perfect score does not only reflect 100 percent in terms of sexual orientation but also as it relates to gender identity. In the area of ‘inclusive workplace,’ Salem scored even higher than Boston, whose score reflects a 100 because of the bonuses added. Salem’s 100 is a perfect 100 ‘without’ the added bonuses, meeting all criteria for Municipal LGBTQ inclusion right from the start. This is a direct reflection of the Mayor’s leadership.”

First elected to office in 2006, Driscoll has a long history of supporting the LGBTQ community.

The award will be presented to Driscoll on June 21 at The Rainbow Times’ Annual Pride Kick-off Benefit Cruise, launching from Pickering Wharf in Salem, Mass.

The list below details what the inclusive Mayor has done through the years, since taking office, to advance LGBTQ equality:

November 2006: Establishes the first diversity committee called the Salem No Place for Hate Committee through the Anti-Defamation League to combat discrimination

July 2010: Welcomes the first North Shore Elder Services-sponsored ‘Over the Rainbow Coalition’ gathering for LGBT seniors and allies at Salem Willows. The Coalition now meets for monthly dinners at the House of the Seven Gables in Salem

June 2012: Driscoll recognizes local LGBT activist and drag queen Gary “Gigi” Gill as the official “Queen” of Salem with a mayoral citation for his work on behalf of the LGBT community

March 2013: Driscoll raises the pride flag above Salem City Hall and changes her Facebook profile to the Human Rights Campaign red and pink equality logo in solidarity with the LGBT community as the Proposition 8 and DOMA cases are argued before the U.S. Supreme Court

April 2013: Driscoll signs on to the national “Mayors for the Freedom to Marry” coalition in support of marriage equality

June 2013: Driscoll and the Salem Police Chief designate the first LGBT community liaisons in both the Mayor’s Office and Salem Police Department

September 2013: Driscoll recognizes the North Shore Alliance for LGBT Youth (nAGLY) with a mayoral citation at their annual Gala for their support of Salem and the North Shore’s LGBT youth

October 2013: City officials recognize drag performer, recording artist and LGBT activist Sharon Needles and LGBT promotional events group Go Out Loud at their ‘Scream Out Loud’ Halloween event with citations for their work on behalf of the LGBT community

January 2014: Driscoll receives the first annual Community Leadership Award for her LGBT advocacy from the Tiffany Club of New England at their First Event Transgender Conference

June 2014: Thanks to the efforts of Gary “Gigi” Gill, city officials and the Salem Postmaster unveil the U.S. Postal Service’s commemorative Harvey Milk Forever Stamp at the Salem Post Office where it will hang permanently in honor of the Milk’s legacy and the LGBT community

June 2014: Salem achieves a perfect score on the Human Rights Campaign’s 2014 Municipal Equality Index for the City’s LGBT- inclusive laws, policies, and practices, joining Boston and Cambridge as the only Massachusetts communities to reach 100%

July 2014: Driscoll terminates management contract of Old Town Hall with Gordon College as a result of the college’s anti-LGBT advocacy and campus policies

July 2014: Driscoll launches a campaign that garners national attention and raises over $12,000 for the North Shore Alliance of LGBT Youth (nAGLY) in response to anti-LGBT backlash from the City’s decision to terminate its contract with Gordon College.