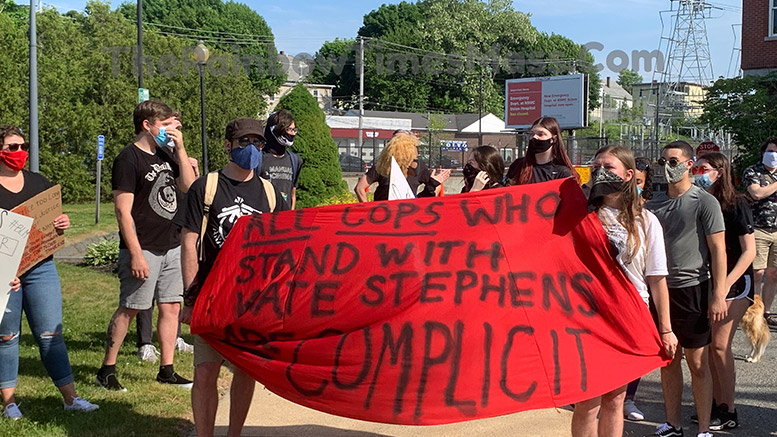 SALEM, Mass.—Earlier this month the Salem, Mass. Police department (SPD) came under fire after a high-ranking official posted a personal opinion on the official police department’s Twitter account allegedly “disparaging” the city of Boston and Massachusetts leadership pertaining to commonwealth’s Black Lives Matter protests, according to the tweet posted.

“@marty_walsh so you issued a permit for 10 of thousands of people to protest but I can’t go to a restaurant? You are ridiculous. You and Too Tall Deval are killing this State,” the tweet read on the SPD Twitter account.

According to department officials, the tweet was posted by SPD Capt. Kate Stephens and was removed from the official SPD account shortly after it was posted.

The tweet, sparking community outrage served as the catalyst to a community-wide peaceful protest, demanding the removal of Capt. Stephens from the SPD.

“I am absolutely mortified that an officer of the law, of our police department, thinks that eating at a restaurant should be as highly regarded as a Black person’s life,” wrote the protest organizer, Mercis Arias on the Facebook event page. “Eating at a restaurant (any comforts, commodities, & privileges) is [not] more important than a movement that is serving to amplify our pain and shed light on the system [of] injustices that go on in this country … This officer was put on paid leave when in reality they should have been dismissed from the police department and of having any power over us …” 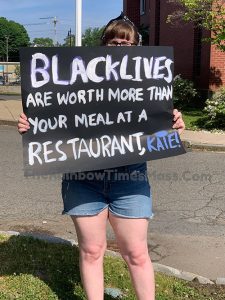 Right to Protest, time to listen

Butler empathized with the protesters and understood the need to protest, especially given the current events where video has surfaced showing various instances depicting people of color dying at the hands of police officers.

“People have a right to be heard and it is their constitutionally afforded freedoms to assemble and be heard,” Butler said of the planned protest. “They will be allowed to do this without interference from the police department. Our only involvement would be if we were needed for safety. We have been here before with other incidents across the country … it is time to listen and be heard. Otherwise, it’s like saying we will have a meeting to talk about it, but no one ever schedules the meeting. It’s time.”

Within a few days, hundreds of online users, many of whom were Salem residents, took to the event page to express their support of the protest, which took place in front of the SPD headquarters. It was reported that more than 300 were in attendance.

“I’m furious that this happened in Salem. Capt. Stephens should be fired now,” said Daymond Rivera, a Salem State University Student and a member of the LGBTQ community. “Why wait? She expressed a clear bias against black and brown communities by comparing us to eating at a restaurant. Then, she went on to refer to the Governor as ‘Too Tall Deval,’ a shot at Governor Baker and our first black [former] governor, Deval Patrick. That tweet was racist and tasteless. No peace, no justice.”

Butler explained the police procedure on disciplinary action in cases like this.

“As a Civil Service community, per their requirements, she [Capt. Stephens] has been placed on administrative leave pending the outcome of an internal investigation, which will conclude with a hearing on the matter,” she said. “By Civil Service requirements, the officer must receive a minimum of a seven-day advanced notice of said hearing.”

“I don’t believe that any officer who is facing disciplinary action due to improper actions perceives this time as paid vacation due to the gravity of the situation before them,” Butler said. “… We have the laws and rules of civil service and due process to adhere to in taking any disciplinary action against an officer regardless of what that action may be. Any action taken in excess of 5 days of suspension requires a full hearing prior to the disciplinary action being taken where they are afforded the opportunity, much like court, to have legal counsel and present their defense.”

Salem Mayor Kim Driscoll elaborated on the process and the Chief of Police’s pertinent reaction.

“Within hours of the Tweet being published the individual responsible was identified and removed from service, and the City began an internal review to identify the full extent of these actions,” Driscoll explained. “… I believe that Chief Butler is treating this matter with the seriousness that it deserves and that she will render discipline accordingly.”

Like others, Driscoll shared in the outrage of police brutality, as demonstrated by the murder of George Floyd. Floyd died when a Minneapolis Police Department officer, placed his knee on Floyd’s neck for 8 minutes and 46 seconds, while Floyd plead for his life and called for his deceased mother as he was taking his last few breaths.

“I am outraged by the killing of George Floyd in Minneapolis, and other Black men and women who have been killed unjustly, and know that every city and city leader, myself included, needs to do more to ensure justice and accountability for people of color in our community,” Driscoll said. “Every police department ought to be taking a hard look at their use of force policies to ensure they are aligned with community values and authorize local law enforcement to exercise their powers judicially.”

Bias has no place in the SPD

Relating specifically to the SPD incident, the mayor zeroed in on trust and accountability.

“While this inappropriate tweet may have been removed from Twitter and condemned by many Salem residents, it is not enough,” Driscoll added. “We have a responsibility to ensure that actions such as this are addressed head-on and that individuals in a position of public trust are held accountable.”

Butler said bias has no place in the SPD and expressed a keen awareness of the need that the department is and stays impartial.

“Any statement that impacts the multiple groups of persons within our community that is perceived as bias or which minimize feelings of fairness and equity from anyone in our community, particularly those in positions of authority, has to be more disheartening than I could provide in words to give it the truest sense of justice,” she said. “It has no place in the police department as we are here to serve our community, the whole community in a fair, unbiased, just and right manner—it should be expected of us. We will never be successful in our mission without the support of all those in our community and particularly those in our marginalized groups.” 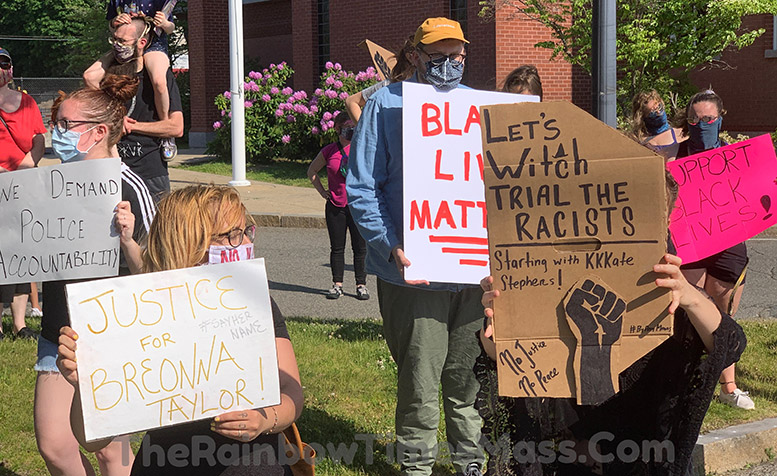 “I truly believe [that] in Salem we had embraced a community policing model that showed a commitment to underserved and underrepresented communities, and that foundation would help us in a moment in time such as we have now,” said Tucker of the incident.

In addition, he also recognized the need for accountability from the police.

“It’s also vital that police leaders be out front acknowledging any shortcomings in their department and work with community leaders to address them,” Tucker said. “I believe every police department in the country no matter what size, from a one officer department to the largest in NY and LA, needs to do a deep review of their internal policies in recruiting, selecting, hiring and training to keep anyone who does not belong in policing off the job.”

According to the State Representative, he is currently working with the Black Caucus at the State House to build inclusive policing procedures to ensure local authorities do not discriminate against people of color.

“I will commit to working at the State House and to use my experience to help with legislation that accomplishes that,” Tucker said.

Regarding Stephens and any subsequent disciplinary action, Tucker expressed trust in Mayor Driscoll and Chief Butler.

“I have full faith and confidence in Chief Butler and Mayor Driscoll to take any and all action necessary and warranted,” Tucker added. “The message to the people of Salem, particularly those in the minority community, is that transparency and swift action by the department should be a sign that if some transgressions were found, they will not be tolerated.” 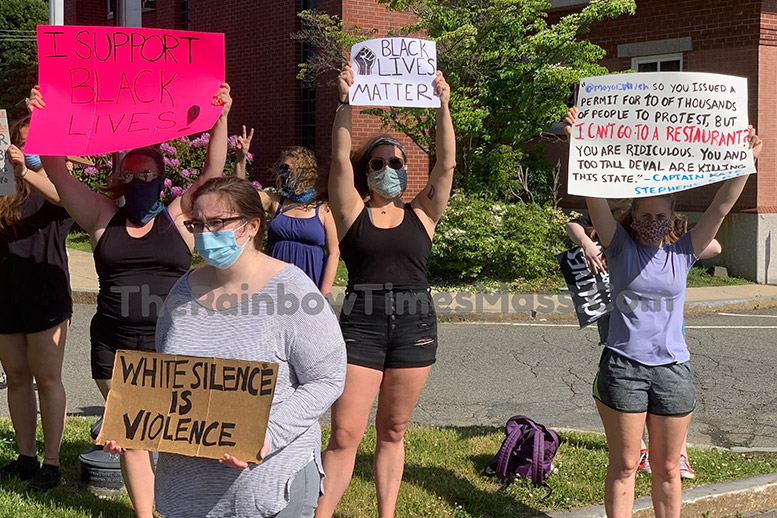 Approximately a little over 300 protesters were present at the Salem Mass. Police headquarters; Photo: The Rainbow Times

Protesters were encouraged by Arias to wear masks to prevent the potential spread of COVID-19. She also provided “water and chairs for those for those that needed them” and worked collaboratively with city officials to ensure the protest remained peaceful, according to the event’s Facebook page.

Various news outlets, online blogs, and social media conversations have centered around adopting the rules of the #8CANTWAIT campaign, which include the outlining of policies to reduce the harm caused by police in the short-term.

According to Butler, the objectives established by the organization are already instituted at SPD.

“People keep talking about the 8 CANT WAIT—these are tenets we follow within our policies,” Butler explained. “Excessive force is never tolerated, which is why we have an objective reasonableness standard that requires the least amount of force to be used in relation to the actions of the person. These are incidents that are tracked and reviewed. We have a complaint process to review any incidents where someone feels they were mistreated by the police, and ‘necks are off-limits,’ period.”

Currently, though Butler would like to have body cams instituted as a part of SPD policing, city monetary commitment does not allow for it.

“I fully agree that body cams have a place to ensure that [they] capture the actions and words of those involved as you cannot wash over what has been recorded,” she said.

To create equality in policing, Butler said it is necessary to ensure that the department mirrors the community and ensures all those being considered are “not affiliated with any ideals or groups that are biased-based against any other person or group. [Lastly], is to ensure the SPD works within all neighborhood organizations.”

The nation’s outcry for police reform is reported throughout the globe, and Salem is not immune to it.

“There is always room for change and growth; we are no exception,” Butler said. “Salem and the nation need to truly look at how police work within their communities, but also how persons of color are treated by all in their community and if equity exists and if not, address it.”

And, Tucker vows to be a part of that change, legislatively.

“I would be proud to sponsor and advocate for legislation that leads to better and proper encounters between police and the trans community,” Tucker said. “I feel very strongly that any marginalized community needs to be heard and recognized by police officers and often with proper hiring and training these officers will develop trusting relationships and all of that benefits the community at large.”

Arias took to social media after the protest to thank the city officials, attendees, and police officers that assisted during the event.

“I would like to thank Mayor Driscoll for offering her support for this protest, to the two officers who came out and donated 100 masks and allowed us to use their restrooms, to the countless people who came and brought water, snacks, masks, etc. and to Domino’s Pizza for their generous donation of over 10 pizzas,” she said. “Ultimately, I would just like to thank everyone and my apologies if I forgot to name anyone else!”

Left in reverence at what took place, Arias said the event exceeded her expectations.

“It was a pleasure standing with each and every one of you!” she wrote on the event page. “I never thought we would have this much of an outpouring of support and unity from this city. Every second I was in awe of how we managed to not only come together in solidarity but do it so extremely peacefully. … I hope that you all know that your voice matters as we saw demonstrated today!”