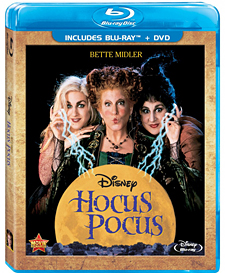 By: Chris Azzopardi/Special for TRT–

When Hocus Pocus flew into multiplexes on a broomstick in 1993, it was a silly farce that, in hindsight, had lots of gay cred going for it: Besides Bette Midler, it also starred a pre-Sex and the City/Glee Sarah Jessica Parker. Ahead of its time, it was already mirroring a culture that would become obsessed with using Botox to erase wrinkles. But these three witches, also including Kathy Najimy as the really stupid one, were more resourceful than us when it came to hiding the fact that they’re actually three centuries old. Just give them the youthfulness of a child and those years go bye-bye. (Talk about some hocus pocus.) The tricky trifecta ham it up in this Disney flick – especially Midler, with her serious rabbit grill – that’s as much for kids as it is for diva-obsessed, Carrie Bradshaw-loving queers who revel in the awesomeness of seeing their girls cause trouble and ride on hard sticks. The hi-def experience certainly makes the movie more magical, but someone should conjure the Spirit of Special Features – they’re nowhere on this Blu-ray.

Before “torture porn,” scary movies weren’t all boobs and guts; they could scare you without sawing off a foot. Universal’s gone back over 80 years to remaster the classic Dracula and unleash the other beasts that followed the less-is-more approach: With eight films in all, the studio that defined the horror genre goes all out with this must-have for monster-movie fans. The first dates to 1931, when Bela Lugosi turned Dracula into a legendary nutcase full of weird ticks; the original is included here, and with a striking cleanup – check out the cool restoration process during one of the many special features – that should scare up new horror fans. How some of these movies inspired contemporary fright films should be apparent with not only Creature from the Black Lagoon – a trailblazer for underwater spooks that now, some six decades later, comes off as delightfully hokey, “did they really think that was scary?” camp – but also The Wolf Man, which might feature the most empathetic “villain” ever. Also included are both Frankenstein and The Bride of Frankenstein, the 1943 version of The Phantom of the Opera, The Mummy and The Invisible Man. Besides the better-than-ever Blu-ray transfers, all the films are tucked in a neat book with a supplemental info guide that breaks down their beginnings. And the special features? Lots to sink your teeth into.

No series in recent memory has as many creepy twists, truly terrifying boos or half-naked backside shots of Dylan McDermott as

American Horror Story, a Ryan Murphy production that transformed Jessica Lange into an Emmy-winning psychopath. FX’s horror hit, in its first button-pushing season, turned us on (sometimes literally) to all things horrific – Rubber Man (and Piggy Man), a freaky home invasion and mistresses that come back from the dead – as a family regretfully uncovered the dark secrets of “Murder House.” One of those secrets? What happened to the gay couple that used to live there (half of that twosome being the newly out Zachary Quinto). It wrapped after 12 episodes (the second season comes with an Asylum tag), all of which are included here, but the haunts keep coming: The bonus features include a making-of, a cool look at the menacing opening sequence, an introduction to the ghosts and a tour of the house where it all started – and ended.

If anybody knows bizarre, it’s the bromantic movie-making duo of Johnny Depp and Tim Burton. Together they turned Charlie and the Chocolate Factory into a freak show and brought the musical story of knife-wielding barber Sweeney Todd to the big screen. Weird isn’t a problem for either. So, naturally, Dark Shadows, based on the ’60s series, throws ghosts, vampires and, uh, werewolves into the gothic mix, starting off with promise as we meet a family of distinctly dysfunctional characters and a cursed vampire, Barnabas Collins (Depp), who returns to his ancestral home – and tries to adapt to things like, you know, cars. It’s got wackiness – and standout roles from Helena Bonham Carter and Eva Green – but where’s the bite? The last half of the directionless Dark Shadows, which does look fantastic, collapses on itself with incongruous storytelling and off-the-wall hysterics, dragging itself to a Death Becomes Her finish that’s all frills but no fun. The extras are just as disappointing: six minutes of deleted scenes and scene-specific interview snippets. Not even a full commentary to make up for this mess.

Even without Sigourney Weaver going all butch on some killer mutants, this prequel to Alien has all the necessary components of a

Ridley Scott flick: kick-butt babes, alien-baby births and stomach-turning ickyness. Only if Michael Fassbender, who stars as a deceitful android, showed his very large penis – again – could this movie be everything you ever wanted. It’s the year 2089 and a crew of inquisitive explorers sets out to seek the origins of humanity in uncharted territory that’s obviously a breeding ground for all sorts of human-hungry gross things. Questions aren’t answered like the film promises, but it’s sure hella fun watching aliens tears apart these people – not to mention seeing Charlize Theron play rough and a pretty incredible finale that lays the foundation for Scott’s great quadrilogy. Originally released in 3D, Prometheus gets the same fancy treatment for its home-release (with many hours of special features), but the two-disc Blu-ray still pops with visual splendor and a few cool extras: a Ridley Scott commentary, deleted and alternate scenes and The Peter Weyland Files for the Alien diehards.

*Chris Azzopardi is the editor of Q Syndicate, the international LGBT wire service. Reach him via his website at chris-azzopardi.com.