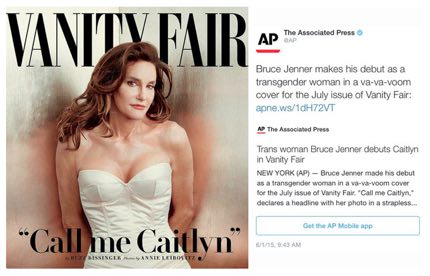 The Associated Press violated its own guidelines for how to refer to transgender people in a voyeuristic report about former Olympian and reality television star Caitlyn Jenner’s appearance on next month’s cover of Vanity Fair.

On June 1, Vanity Fair released a preview of its July issue cover story, headlined, “Call Me Caitlyn.” The story is Jenner’s public debut as Caitlyn following a highly-watched television interview with ABC’s Diane Sawyer in which Jenner, who still identified then as Bruce, announced that she is transgender and detailed her experiences hiding her gender identity while appearing on the popular reality show, “Keeping Up With The Kardashians.” The Vanity Fair story says Caitlyn Jenner now wishes to be referred to as a woman.

In its report on the Vanity Fair cover, the Associated Press violated its own guidelines on how to report on transgender people, which state that trans people should be identified by their preferred pronouns. Instead, the AP story refers to Jenner as a male and calls her Bruce. The report also objectifies Jenner by describing her as wearing “va-va-voom fashion” and highlighting her “ample cleavage:” [pullquote]Outlets like E Online and The New York Times have reported on the story without incorrectly identifying Jenner.[/pullquote]

Bruce Jenner made his debut as a transgender woman in a va-va-voom fashion in the July issue of Vanity Fair.

“Call me Caitlyn,” declares a headline on the cover, with a photo of a long-haired Jenner in a strapless corset, legs crossed, sitting on a stool. The image was shot by famed celeb photographer Annie Leibovitz. Prior to the unveiling of Caitlyn, Jenner had said he prefers the pronoun “he,” but Vanity Fair contributing editor Buzz Bissinger, who wrote the accompanying story, refers to “she.”

Jenner debuted a new Twitter account as well with: “I’m so happy after such a long struggle to be living my true self. Welcome to the world Caitlyn. Can’t wait for you to get to know her/me.” In about 45 minutes, the account had more than 180,000 followers.

According to the magazine, which took to Twitter with the cover Monday, Jenner spoke emotionally about her gender journey: “If I was lying on my deathbed and I had kept this secret and never ever did anything about it, I would be lying there saying, ‘You just blew your entire life.'”

In addition to the corset, Vanity Fair released a black-and-white video on the making of the cover. It shows Jenner getting her hair done and posing in a long, off-the-shoulder gown with ample cleavage. [emphasis added] [pullquote]Instead, the AP story refers to Jenner as a male and calls her Bruce. The report also objectifies Jenner by describing her as wearing “va-va-voom fashion” and highlighting her “ample cleavage:”[/pullquote]

The AP also referred to Jenner as a male in a tweet about its story. It deleted the tweet after being criticized for misgendering Jenner.

In guidelines issued in response to Vanity Fair‘s cover story, GLAAD urged media outlets to refer to Jenner as Caitlyn and use the proper pronouns:

DO refer to her as Caitlyn Jenner. DON’T refer to her by her former name. She has changed it, and should be accorded the same respect received by anyone who has changed their name. Since Caitlyn Jenner was known to the public by her prior name, it may be necessary initially to say “Caitlyn Jenner, formerly known as Bruce Jenner…” However, once the public has learned Jenner’s new name, do not continually refer to it in stories.

DO use female pronouns (she, her, hers) when referring to Caitlyn Jenner.

DO avoid male pronouns and Caitlyn’s prior name, even when referring to events in her past. For example, “Prior to her transition, Caitlyn Jenner won the gold medal in the men’s decathlon at the Summer Olympics held in Montreal in 1976.”

Outlets like E Online and The New York Times have reported on the story without incorrectly identifying Jenner.

Beyond misgendering Jenner, the AP’s fixation on her “cleavage” and “va-va-voom” fashion reinforces a widespread problem with media coverage of transgender people: a voyeuristic fixation on their bodies and appearances. That kind of coverage is degrading and objectifying and treats transgender people as either spectacles or sexualized objects. It adds nothing of substance to news reports while reinforcing the idea that how transgender people look is an acceptable topic for public comment.