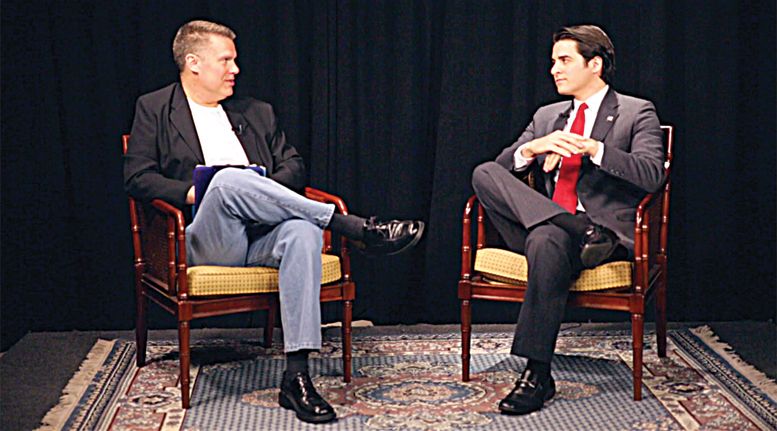 The premise is simple. Talk show host Tom Franklin (portrayed by gay actor and filmmaker Matt Gaudreau) is beginning an interview with Republican Congressman Chip Garner (played by actor Sean Carmichael). A sparse production crew is nearby watching the conversation unfold between the host and his guest. But there’s a twist. Franklin prompts the congressman to put on a cursed ring that, when worn, causes the wearer to honestly respond to any question asked.

Needless to say, the interview goes downhill after Garner places the ring on his finger.

“I’m sure many people will have positive responses to the film and what it says and other responses will be negative, but the point is that the conversation gets started and that the facts are put out there even if some people don’t necessarily agree with them,” said Gaudreau, who wrote and directed the 12-minute short film, “The Ring of Truth: Guns, Greed and Homophobia in Republican Politics“.

The conversation that unfolds between Franklin and Garner is clearly an attempt by Gaudreau to open up a much-needed dialogue on a range of issues that are at the forefront of national politics.

“It must suck to be a queer in Mississippi or North Carolina,” said Garner in response to a question from Franklin about the recent anti-LGBT laws passed in those states.

The congressman goes on to bluntly discuss abortion, immigration, and LGBTQ people and even his use of fear tactics to get votes.

“I care about one thing. That is re-election,” Garner says with a look of sheer intensity on his face.

“In the film, Chip says some pretty heinous things, and you start to wonder, at least I did, if these were things he actually felt or was this just the rhetoric so ingrained in him that he couldn’t separate reality away from it,” said Carmichael, whose debonair good looks and all-American disposition add a gravity to the character reminiscent of many U.S. politicians.

Given the June 12 shooting in Orlando that took the lives of 49 people and injured more than 50, the film, which was produced prior to the mass shooting, provides a particularly salient take on the national debate on gun reform. The film references the December 14, 2012 mass shooting that took the lives of 20 school children and six adults at Sandy Hook Elementary School in Newtown, CT.

“Bad guys can find these weapons,” Garner declares even before putting on the ring of truth. “The good guys should have them too. It’s all about balance.”

Considering the recent shooting in Orlando, Carmichael said he felt his character’s comments around gun control were especially relevant.

“Any time there is a strongly divisive political discussion you’re going to have the loudest voices at the fringes and then people meeting in the middle, trying to have an honest dialogue,” Carmichael said in reference to the recent shooting in Orlando.

“But I think as long as people are having that dialogue, however many people that may be, that’s important,” he continued. “Hopefully the number of people actually engaging themselves actively in that discussion grows.”

Gaudreau grew more frustrated with the lack of progress in pushing forward gun reform in the wake of the Orlando shooting.

“It’s sadly no surprise that even after yet another horrible massacre in the U.S. that gun votes in the Senate and even a sit-in by Democrats in the House went nowhere,” he said, noting that the film was shot in April and posted online in late May and not filmed after the recent shooting in Orlando. “Republicans will not let any substantial gun legislation pass because they are beholden to the NRA.”

Attempts by The Rainbow Times to reach a representative from the Massachusetts Log Cabin Republicans for comment were unsuccessful.

“I believe that in many cases, these politicians are more concerned with getting re-elected and answering to their special interest donors, than standing on the right side of the issue,” said Tyler Carlton, Massachusetts Democratic Party LGBT Subcommittee Co-Chair.

“Although I don’t believe in the use of stereotyping, I must say, the recent refusal of Republicans to pass common sense gun legislation, or civil rights bills regarding LGBT protections, it’s hard not to see most Republican congressmen being channeled in Chip Garner,” Carlton continued.

Partisan politics aside, Gaudreau said his goal in making the film was to start having honest conversations. He noted that though the characters of Tom Franklin and Chip Garner are fictional, the facts and statistics used in the film are based on real life-life data.

“I can only hope this film can open people’s eyes to what some of our politicians are really like when they are unmasked and that it can bring about some kind of positive change,” he said.