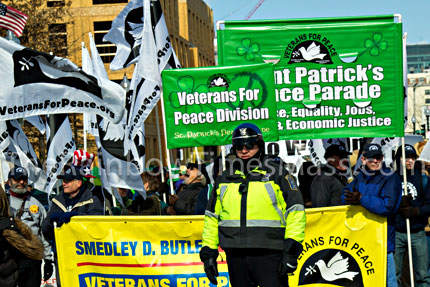 2013 St. Patrick's Peace Parade where all LGBTs were able to march without restrictions, without homophobia, or bias.
Photo: TRT Archives/Sean Sullivan

2013 St. Patrick’s Peace Parade where all LGBTs were able to march without restrictions, without homophobia, or bias.
Photo: TRT Archives/Sean Sullivan

However, one group already banned is MassEquality, the state’s leading grassroots advocacy organization. In rejecting MassEquality’s application to march, the South Boston Allied War Veterans Council (AWVC), which oversees the parade, cited Hurley v. Irish-American Gay, Lesbian, and Bisexual Group of Boston, the high court decision that allows the AWVC to control the message of its St. Patrick’s Day celebration, thereby banning LGBTQ groups and others.

MassEquality did not learn of its application rejection in writing. Rather, in late January, parade organizers left an after hours voice message notifying them. In response, MassEquality’s Executive Director Kara Coredini said in a press statement: “Since when does being open and proud of being an LGBTQ person in the City of Boston send the ‘wrong message?’” [pullquote]However, Boston Herald coverage suggests, Mayor Martin J. Walsh is hoping to broker a deal with parade overseers—a compromise satisfactory to the Allied War Veterans that would also be inclusive of openly identified LGBT participation. [/pullquote]

Meanwhile, initial media reports in The Boston Globe indicated that AWVC had accepted an application from South Boston Association of Non-Profits (SBANP). In applying to participate, SBANP said it was explicit about including openly identified LGBT people in its marching contingent.

“We put in an application saying we want a unit that reflects who is living in South Boston, who we service, and we service members of the LGBTQ community,” Bob Monahan, chairman of the nonprofits’ parade committee, was quoted in The Boston Globe on January 30. “What’s different, what’s new is that for the first time in 108 years, they have put something down on paper approving a group that says there’s gay people in their unit. The council is signing off on acknowledging that there are gay people in our parade, and they’ve never done that before.”

“[The application] says they’re an association of nonprofits that collectively advocate for all South Boston,” Wuschke told The Boston Globe, quoted January 30. “It says they’re going to have about 20 people, plus three costume characters — Dora, Big Bird, and Elmo — and they’re going to play ‘Sesame Street’ music. That’s the application I have in front of me, and it doesn’t say anything about LGBT [lesbian, gay, bisexual, and transgender] or anything like that. I’m not sure where they’re getting their information from, but our position has not changed.”

Attempts to reach Wuschke and Brian R. Mahoney, parade chief marshall, were unsuccessful. Mahoney also serves as editor-in-chief of South Boston Today, a weekly print and online publication with a “commitment to upholding the South Boston community’s traditions, promoting its values and embracing all of its people,” according to its website. Similarly, attempts to reach Michael Dowling, president of the South Boston Association of Non-Profits, and SBANP’s parade chairman Monahan were unsuccessful.

With the parade fewer than weeks away, it appears, however, that no contingent with openly-LGBT identified participants will be allowed to march. Pat Scanlon, a Vietnam veteran and coordinator of Veterans for Peace, said his group has not heard yet from the AWVC about its application to march.

However, Boston Herald coverage suggests, Mayor Martin J. Walsh is hoping to broker a deal with parade overseers—a compromise satisfactory to the Allied War Veterans that would also be inclusive of openly identified LGBT participation. The son of Irish immigrants, Walsh is the city’s first Irish-American mayor, in twenty years.

“If the gay community is not allowed to march, I am not marching in the parade,” a resolute Walsh told The Boston Herald, quoted February 12.

In a recent telephone interview, Kate Norton, the mayor’s press secretary, confirmed the mayor would not march in the parade unless it is inclusive of LGBT people.

Norton also confirmed Walsh would attend the St. Patrick’s Day breakfast and political roast that is scheduled for Sunday, March 16, held the morning of the parade. This year’s gathering, historically a must-attend event for politicians, is hosted by Senator Linda Dorcena-Forry, a Dorchester Democrat.

Asked about the mayor’s location at parade time, Norton said, “I don’t know where [the mayor] is going to be during the parade.”

For years, a signature event in the City of Boston’s celebration of St. Patrick’s Day has been the Allied War Veterans’ annual parade, which is believed to be the nation’s second largest. Each year, the parade draws more than half a million people into the iconic South Boston neighborhood. Marchers trek the more than four-mile parade route, which begins on West Broadway (Broadway Station T stop), continues onto East Broadway, making its way back via East Fourth, East Fifth Street, and G Street, around Dorchester Heights, and onto Dorchester Avenue (Andrew Station T stop).

But the Allied War Veterans parade is not the only parade game in South Boston. In fact, two parades have trekked through the same neighborhood streets since 2010 when the Veterans for Peace first applied but were rejected.

Scanlon said parade organizers used not wanting the word “peace” connected to the word “veteran” as reason enough to ban the group from marching.

Last year, when the Veterans for Peace organized the second march, which took place one hour after the main event and was separated by Boston city street sweepers, the parade had more than 2,000 participants. Those who marched with the peace parade included six bands, trolleys, duck boats, floats, and the like—all organized into eight separate divisions under the categories of veterans, peace, LGBT, religious, environmental, labor, political, social, and economic justice.

This year, Scanlon said the Veterans for Peace parade will be located “right behind the first parade,” with city street sweepers following after the second parade. This year’s placement of sweepers is significant, he said.

“The street sweepers behind us means the party isn’t over till the street sweepers sweep,” said Scanlon. “So what this [placement] allows is for hundreds of thousands of people to see our message of peace and inclusion and environmental stewardship and social and economic justice.”

Scanlon still holds out hope the AWVC will have a change of heart and mind.

“We want the first parade to stop this nonsense and have that parade open and welcoming to any group without censorship that would like to walk and celebrate,” Scanlon said, and “If that is not going to happen, then bring our parade up close to the back of theirs, separate the two by 100 yards so that everyone knows there is a separation here.”

Scanlon said that safety concerns given The Boston Marathon bombings last spring might well require a closer juxtaposition of the two parades. He also said his organization has not participated in any behind-the-scenes negotiations with parade organizers, local politicians and the mayor to make the AWVC event fully inclusive.

“The mayor is handling it himself,” said Scanlon. “His office told us that personally.”

As candidate for Boston mayor, Walsh indicated the need for negotiation over the parade posture vis-à-vis openly LGBT inclusion.

“As mayor, I will sit down with them and work out a compromise so that people can feel like they can march in the parade,” Walsh said. “This parade should be inclusive, and that goes for every other parade marching on public streets.”

Meanwhile, MassEquality’s Coredini said her organization would not be marching this year in the Veterans for Peace parade.

“MassEquality has never marched in the Peace Parade, although we continue to support the parade and our supporters may choose to march in it,” Coredini said. “Any step toward inclusion is a step forward, and we support the organizers of the Peace Parade for their work toward that end.”

Coredini added, “The LGBTQ community in Massachusetts faces issues far more urgent and critical than the ability to march in a parade—youth homelessness, school bullying, HIV/AIDS, anti-trans discrimination and more. MassEquality continues to prioritize the dedication of its finite resources to those efforts. We will continue to apply to march in the St. Patrick’s Day Parade solely for the purpose of one day ending the negative message its policy of exclusion sends about our community, which serves only to create a climate in which the more critical issues the LGBTQ communities faces can fester.”

Gay and Lesbian Advocates and Defenders (GLAD) will also not participate in Peace Parade.

“We support the march, but don’t have the bandwidth to actually participate,” said Carisa Cunningham, GLAD’s director of public affairs. “Some day these walls of exclusion and division will come tumbling down. It will be a proud day for the City of Boston when one’s sexual orientation is not a litmus test for who can participate in a parade.”

Boston is not the only city with St. Patrick’s Day Parade controversy. In New York City, Mayor Bill de Blasio, said he would not march in that city’s parade if LGBT people were excluded. And like Boston, New York City has two St. Patrick’s Day parades. Since 2000, gay rights activist Brendan Fey has organized an alternative, inclusive parade in Queens. This year’s St. Pat’s

For All parade is scheduled for Sunday, March 2.

*Chuck Colbert marched in the 1992 and 1993 South Boston St. Patrick’s Day Parade as one of 25 participants in the Irish American Gay, Lesbian, and Bisexual Group of Boston.