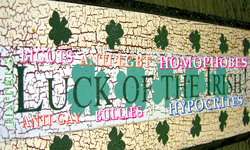 BOSTON, Mass.—Organizers of the annual St. Patrick’s Day Parade that takes place in South Boston rejected an application by MassEquality to participate in Sunday’s parade. In doing so, organizers cited the 1995 US Supreme Court decision in Hurley v. Irish-American Gay, Lesbian and Bisexual Group of Boston, which held that parade organizers are legally able to exclude lesbian, gay, bisexual, and transgender (LGBT) people from participating.

“The LGBT community in Massachusetts faces many issues more urgent than the ability to participate in a parade – youth homelessness, bullying, anti-transgender discrimination, HIV/AIDS, elder abuse, and more. But public rejection by parade organizers is significant in that it’s emblematic of the more life-altering rejection our community members face every day.

“Rejection by their families is why 25 percent of lesbian or gay teens experience homelessness as compared with just three percent of heterosexual teens, and it’s why up to 40 percent of homeless youth are LGBT. Rejection by their peers is why LGBT students are four times more likely to commit suicide than their heterosexual counterparts. Rejection is also why the mere fact of being an LGBT person in Massachusetts results in higher stress and poorer health.

“It is disappointing that in this climate, parade organizers would choose to reject our application to participate in Sunday’s parade.”

MassEquality works to ensure that every lesbian, gay, bisexual and transgender person in Massachusetts is protected from cradle to grave—with equal rights and opportunities in school, in marriage and family life, at work and in retirement.