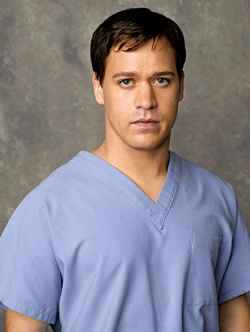 The return of T.R. Knight

There was that “f-word” scandal, he quit Grey’s Anatomy and then… whatever happened to T.R. Knight? Well, first he took some time off, appeared on Law & Order the way everyone does eventually, and then spent time under the media radar doing theater – the perfect route to insure that Hollywood will ignore you for as long as you like. But now Knight is back on the screen in 42, the upcoming Jackie Robinson biopic from Legendary Pictures. In the role of Robinson will be Chadwick Boseman (The Express), while Knight will portray Harold Parrott, the Brooklyn Dodgers’ traveling secretary. Meanwhile, Harrison Ford will star as Branch Rickey, the man who signed Robinson to the Dodgers in 1947, making him the very first black Major League baseball player and ending segregation in the sport. In other words, baseball fans would do well to bring something to discreetly sniffle into when the film opens in the spring of 2013.

Hey ladies, Robert Rodriguez has a new movie in the works. Of course, you’ll have to look past its most obvious qualities to see what’s specifically in store for you, since it’s called Machete Kills and is, in fact, the sequel to the Grindhouse director’s crazy, Danny Trejo-starring revenge-sploitation film of last year. And OK, yes, it also stars Mel Gibson, which is clearly a turnoff. But before you go looking for a third strike against it, know that in all things there exists a balance. In this case it’s lesbian bombshell Amber Heard, who’s taken a role in the violent action movie. Plot: Machete battles an arms dealer who wants to launch weapons into space. She’ll be featured alongside Jessica Alba (straight) and Michelle Rodriguez (on the books as straight at the time of this writing), both reprising earlier roles in the first installment of the intentionally pulpy fiction. It comes out sometime in 2013; plenty of time for you to figure out once and for all how Jodie Foster manages to enjoy Gibson’s company.

Maybe you were one of the vast throngs of gay guys who thought that Wentworth Miller’s talents were limited to looking hot on Prison Break. If so, then that just shows how much you know. Are you aware that he also wrote the screenplay for the upcoming film Stoker, starring Nicole Kidman and Mia Wasikowska? Or that his latest scripted effort, The Disappointments Room, has been picked up by power-lesbian Christine Vachon’s Killer Films, which will join forces with Voltage Pictures (The Hurt Locker) to produce the project? Well, now you do. The brief plot synopsis for Disappointments makes it sound like a typical haunted house/something-bad-happened-here movie – family moves into mysterious old dwelling where dark secrets lie – but the fact that Killer (Mildred Pierce, Boys Don’t Cry) is into it means there’s already some sort of secret wrinkle we don’t know about. This is a company that puts vision before money, so we’ll be happily following the progress of this one.

When Margaret Cho played North Korean dictator Kim Jong Il on 30 Rock last season, kidnapping Avery (Elizabeth Banks) and setting a bizarre plot line in motion for Jack Donaghy (Alec Baldwin), it was pretty clear she’d be back this season to renew the role. And then Kim Jong Il died. What to do? And the answer to that long-simmering question is: bring back Margaret Cho as Kim Jong Il, of course. This is a show, after all, that successfully and hilariously tackled Tracy Morgan’s real-life offensive anti-gay statements during a stand-up routine, so the death of a real-life character isn’t going to slow them down. Just how this will all shake out is under wraps right now, but Cho will return to the show for the May 10 and May 17 episodes. And as long as she’s playing a dead man now, who’s to say she won’t do it again in the future?

Romeo San Vicente would wholeheartedly support a Liz Lemon/Jack Donaghy ticket for 2012. He can be reached care of this publication or at DeepInsideHollywood@qsyndicate.com.

Ian Harvie: Transforming Minds One Truth at a Time and How ‘We’re All Trans’