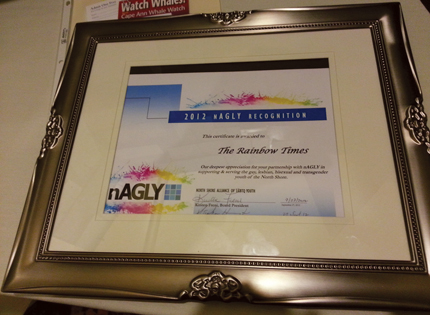 Plaque from nAGLY presented to The Rainbow Times at their 20th Anniversary and Gala.
Photo: Glenn Koetzner/TRT

Plaque from nAGLY presented to The Rainbow Times at their 20th Anniversary and Gala to highlight TRT’s commitment and support for nAGLY in the past three years. TRT’s management and staff are proud to have received this honor from our friends at nAGLY. (Published in the October 4, 2012 issue of TRT).
Photo: Glenn Koetzner/TRT

On September 27th, the North Shore Alliance of Gay, Lesbian, Bisexual and Transgender Youth, nAGLY, celebrated its 20th Anniversary as an organization that supports the GLBTQ youth of the North Shore.

Each year, The Rainbow Times proudly sponsors nAGLY as their main media partner. Although TRT is now based in Boston, unfortunately, its founders could not attend the event due to circumstances beyond their control. However, through fantastic photo coverage by TRT’s lead photographer Glenn Koetzner, community members who were unable to attend the event can view highlights of it in this publication and on our Facebook page. It was through Glenn’s photo coverage that we received a photo (depicted above) that very night of nAGLY’s Annual Fundraiser which expressed their sentiments towards the newspaper’s work for the organization we so proudly support.

To nAGLY, we say thank you and whatever little we do does not compare to the work you do — changing the lives, inspiring, listening and caring for our LGBT youth. It never surprises us when, at other events, some of nAGLY’s youth have approached any of TRT’s staff with a smile and a thank you. They merely recognize us because of you and the significant work you do to let them know of the humble assistance that we provide your organization. Today, we say thank you nAGLY and here’s to many more years to come!