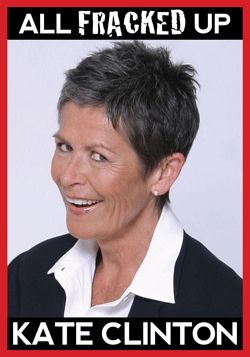 Times like this – election years, when politics are a comedian’s punching-bag – were made for Kate Clinton, who has hilariously riffed on 30 years of stupid presidents and right-winged morons.

In the midst of her All Fracked Up Tour, we caught up with Clinton to talk about the presidential race, progress made in the LGBT community and how comedy is a great tool for creating change.

Chris Azzopardi: What’s the focus of the All Fracked Up Tour?

Kate Clinton: Isn’t that a great title? It’s not easy to be thinking in November what will work in February, because everything changes so fast. My topics are always political and I’m barely keeping up with what’s going on. (Laughs) I can’t believe that anyone ever said, “What will we do without George Bush?” Like, are you kidding me? That got very boring because it was always the same: He’s bad. Oh, yep. He’s bad.

Q: Now you have Santorum.

A: Ah, it’s a comedy gift. People drop off. Michele Bachmann drops off, but Rick Santorum, for some bizarre reason, is rising to the top. A friend of mine says, “Cream rises but scum floats.”

Q: What are your thoughts on the changes and progress within the LGBT community?

A: For a 40-year movement, we’ve made incredible changes. And it’s state-by-state levels, so that means there’s conversation about LGBT rights in all the states – and that’s great. The great Mae West said,  “It’s better to be looked over than to be overlooked,” and we’ve been really looked over. But you can see the poll number changes on America’s belief about marriage equality, so I think we’ve done our work. I think we still have a lot of work to do. I sometimes worry that people will just kick back and go, “Well, excellent, we got that,” but we still have a lot of work to do about race in our community and poverty issues and violence and bullying.

Q: Does that mean you have to work harder and be even more political?

A: Oh yes, absolutely. I feel like the longer I’ve performed, the more political I’ve gotten. The difference is that when I began the mainstream community was really quite homo ignorant, but now, whether they like it or not, they know there are gay people – they’ve met gay people – so that’s a big change.

Q: How does comedy help you get your point across?

A: People let their guard down and become more open when they’re laughing. They let things in I don’t think they ordinarily would. I love my shows when a straight couple comes out and goes, “We’re Republicans but we laughed.” I’ve done my job then.

Q: What are your thoughts on the One Million Moms who rallied against J.C. Penney because they chose an out lesbian, Ellen DeGeneres, as their spokesperson? And what do you think of Ellen’s reaction?

A: I’m always happy when she speaks out because I love to hear her take on anything, whether it’s toilet paper or it’s to give her take on what J.C. Penney did and her sly humor that (One Million Moms) only has 48,000 people on their Facebook site. That’s a great example to people.

Years ago, I met a young guy at a fundraiser meeting and we were talking and he said things like “What’s ACT UP?” “Who’s Larry Kramer?” And finally I said to him, “Where are you from?” (Laughs) He was from Ohio and newly out and thought he was the only gay person in the world. I said, “What made you come out?” And he said it was Ellen. It was the first time he realized he wasn’t the only one. Oh god, he was so funny. It was the season she came out on her show and he said, “It took me a season, too!”

A: Mm-hmm. The stories people tell me are wonderful: they had their first date at my show, they brought their mom. “We had some talking to do after, but she liked it.” (Laughs) But it’s great. I feel very blessed to have this job.

Q: By now most people must know what they’re in for when they go to a Kate Clinton show. But have you had angry right-wingers at your shows?

A: People have gotten up to leave and I just pretend they’re going to the bathroom. One time I was doing a show and these two couples just huffed out and made a big stink in the lobby and security said they wanted to go back there and teach me a lesson. I said, “Thank you for protecting me.” And they were like, “We weren’t protecting you. We were protecting them. We knew you’d turn the audience on them.” (Laughs)

Q: What are your thoughts and predictions on the presidential race this year?

A: It’s going to get uglier, and it’s going to be a fight, but I think that President Obama is getting his message out and reenergizing people. I think it’ll be four more years, which I’m very excited about. He started a lot of wonderful things and I really think the first couple of years of his administration were like cleanup on aisle five – they were going into different departments and cabinets, and it was just a mess. A lot of it was rebuilding, and they have wonderful people working; LGBT people are placed everywhere in agencies across the government and they’ve really just started to crank it out, and it’s good news. I hope we get four more years of being able to move things forward.

Q: Do you think that once he secures four more years he’ll be more open to discussing LGBT issues?

A: Absolutely. It’s politics. But I think that he’s got plenty of sort of surrogates who are speaking up for him. I don’t get the sense that LGBT people are as impatient as they were. I do think with the repeal of Don’t Ask, Don’t Tell and the justice department’s commitment not to defend DOMA because parts of it are unconstitutional – and states like Washington and New York with marriage equality – the LGBT community, while still impatient, and that’s good, are getting more of the real politic of what he’s up against. Republicans are just the opposing-only party – everything’s no, now. If you don’t like government, go golfing. That’s what I think.

Q: Tell me about your cameo on Smash.

A: Wasn’t that great? Apparently NBC was showing trailers on American Airlines and people were screaming on the plane, “Kaaate!”

A: Just a complete pleasure. The scene that I’m in, I had to act very non-impressed and not at all excited by this incredible girl singing in front of me, just belting out “Over the Rainbow” time after time – and it was staggering – but I had to act like it wasn’t that great.

Q: That was a challenge?

A: Yeah. But it’s wonderful to be around such talented young people and to know that – hello! – Angelica Houston is anywhere on the set.

A: I hope so. It’s so much fun and you reach so many people without having to go to their town! (Laughs)

Q: How do you feel about your friend Cynthia Nixon’s brouhaha, where she told a reporter she “chose” to be lesbian?

A: I’m profoundly pro-choice. I love what she said. I thought it was great. And she’s very thoughtful and very outspoken, and she was probably talking along and having a little piece of celery and the whole room blew up. But she’s the real deal.

It could be that we were born this way, but that really shouldn’t be our question. Our question should be, “Why is it so stigmatized?” “Why are we still fighting for LGBT rights?” “What is your problem?”