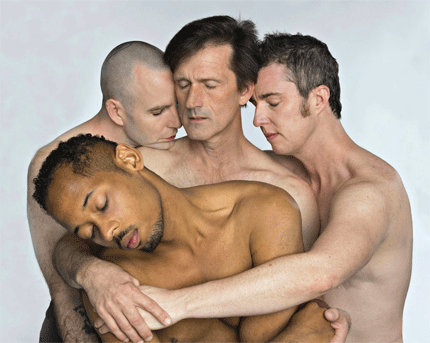 BOSTON—The Theater Offensive, whose mission is to present the diversity of lesbian, gay, bisexual and transgender lives in art so bold it breaks through personal isolation, challenges the status quo and builds thriving communities, will present transgender and queer choreographer Sean Dorsey’s masterful work, The Missing Generation, October 22-25 at Hibernian Hall in Boston.

Sean Dorsey traveled across the U.S. to record oral history interviews with longtime survivors of the early AIDS epidemic—including Boston choreographer-activist Peter DiMuro—and wove excerpts of these interviews into a lush, multi-layered soundscore. The San Francisco Bay Times calls this piece “Heartbreakingly beautiful – a dance portrait of contemporary LGBT history that is profoundly relevant to all generations.”

“The show really validates the depth of loss from that time and the honor and respect I feel for those who fought back during the AIDS crisis,” notes Theater Offensive’s Executive Artistic Director, Abe Rybeck. “One thing that I love about the show is that it deals with terribly difficult issues in artistry but still manages to lift up our humanity.”

Dorsey previously presented a piece with The Theater Offensive in 2012, The Secret History of Love, which drew significant praise for its bold presentation of diverse queer love stories. The Missing Generation chronicles an important time in LGBT history and draws upon survivors’ stories of love, pain, loss, and perseverance. The piece will be performed by Dorsey’s stellar, multi-generational ensemble of dancers: Sean Dorsey, Brian Fisher, ArVejon Jones and Nol Simonse.

The Theater Offensive: OUT in Your Neighborhood works in Boston neighborhoods to create original, groundbreaking works by, for and about the LGBT community. Their year-round community-based workshops, intensive engagement with at-risk youth to end bullying, and free street theater performances are focused in Roxbury, Dorchester, Jamaica Plain and the South End.  OUT in Your Neighborhood expresses the diversity of the city of Boston, gives voice to underserved LGBT community members, creates avenues for cross-cultural dialogue and breaks down the barriers of homophobia, bigotry and hate.

The Theater Offensive started 1989, is led by founding Artistic Director Abe Rybeck. Throughout its history The Theater Offensive has furthered its mission “to present the diversity of lesbian, gay, bisexual and transgender (LGBT) lives in art so bold it breaks through personal isolation, challenges the status quo, and builds thriving communities.” The Theater Offensive is a Resident Theatre Company at Boston Center for the Arts.