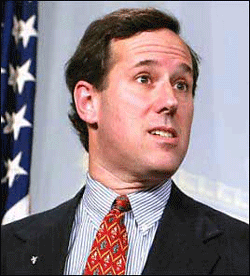 The views of Rick Santorum are fundamentally radical to say the least. What concerns me the most is how exuberantly he professes his religious beliefs as the ultimate way to lead the American people—so much for religious freedom. In recent interviews and reports, Santorum has referenced the Bible as the most essential way to govern our nation, a diverse nation filled with many religions, cultures, and belief systems. Aside from using this ancient book, which relies on hundreds, perhaps thousands of interpretations to fully understand its meaning, his “guiding grace” has rested upon one that has been filled with hatred against non-majority members of our nation such as the LGBT community, women, racial and ethnic groups and other religious affiliations. All of these groups have rights afforded to them under the Declaration of Independence of the United States—“All ‘People’ Are Created Equal, that they are endowed by their Creator with certain unalienable Rights, that among these are Life, Liberty and the pursuit of Happiness.” Even members from his own political party (and others as described below) have exerted that he is completely out of touch with modern politics—with the “people” living in this country.

According to the urban dictionary, the term “hypochristian” is modern definition which is a “… contraction of the words ‘hypocrite’ and ‘Christian.’ These “Christians” claim to ‘follow the teachings of Christ’ but whose belief structure, values and/or actions directly contradict such a claim. Typically, hypochristians, engage heavily in proselytizing and judgment of others whose beliefs differ from theirs.” Hypochristians, in other words, are determined fanatics who have no basis to their credo and who lack a conceptualization of reality and the actual evolution of the world and its people.

Separation of Church and State

Santorum exclaimed that he “almost threw up” after reading JFK’s 1960 speech in which he declared his commitment to the separation of church and state.

“I don’t believe in an America where the separation of church and state are absolute,” he told ‘This Week’ host George Stephanopoulos. “The idea that the church can have no influence or no involvement in the operation of the state is absolutely antithetical to the objectives and vision of our country … to say that people of faith have no role in the public square? You bet that makes me want to throw up.”

To preserve an individual’s rights of religious freedoms as established by the country’s founders, separation of church and state are fundamental concepts of all of our freedoms. This American “vision” that Santorum refers to is a vision shared by only a small group of radical individuals, not the American public as a whole.

As conservative Presbyterian blogger John Schroeder wrote, Santorum’s “truly intolerant comments concerning Obama pretty well disqualify him from holding office. It is simply not the president’s job to be judging whose theology is correct and whose is not.”

The Democratic Party is about Homosexuality

During a 2008 “Press & People of Faith in Politics” forum, Santorum proclaimed that the Democratic Party is about Homosexuality.

According to a MSNBC report, Rick Santorum’s top bankroller, Foster Friess, said that girls should “put Bayer aspirin between their knees” as the primary means of birth control. Santorum himself said he does not believe in any type of birth control under any circumstance. Not only is this barbaric, but as someone mentioned via TRT’s FaceBook page, it is an offense to women who are disabled, have conceived through rape, and cannot physically be responsible for such a misogynistic belief.

Via The Advocate, a U.S. based national gay and lesbian news magazine, Actress and comedian Sandra Bernhard, said the “anti-women rhetoric now being pushed by the Republican Party represents ‘a whole new level of ignorance’ that is unprecedented in history.” In the report, Bernhard was reacting Santorum’s belief that states have the legal standing to ban birth control, and his personal view that birth control is wrong.

On Current TV’s Young Turks, Bernhard said“… Now we have these people who don’t really know the facts, aren’t interested in them, and are totally reacting from this place of fear. I’ve never seen anything like it.” She also asserted that this type of anti-women rhetoric will lead to the Democrats taking the back the House.

“Out of Touch with the Modern World”

According to Think Progress, the Former New York City Mayor criticized his own Party for opposing equality for gays and lesbians during an interview on CNN, saying, “I think beyond all the religious and social part of it, it makes the party look like it isn’t a modern party,” he said. “It doesn’t understand the modern world.”

Other Mayor’s across the country reinforce Giuliani’s opinion. Mayors for the Freedom to Marry is a broad-based and nonpartisan group of mayors who believe that all people should be able to share in the love and commitment of marriage. These Republican and Democratic Mayors represent cities which are culturally, racially and geographically diverse, but share a common commitment to fairness, according to the organization’s website.

Perhaps Former PA Senator Arlen Specter said it best. During an appearance on MSNBC’s The Daily Rundown, he said he would “not support his former colleague Rick Santorum” because of his view on “gay people and women are too extreme to represent America.” I concur.