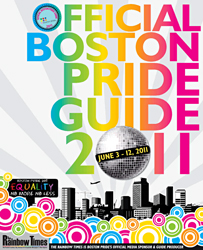 Advertise in the only Official Boston Pride Guide: Rate Card

For the second year in a row, The Rainbow Times has been selected as the official media partner and Pride Guide producer of the largest Pride celebration in New England, Boston Pride.

As the official designer & producer, this glossy-covered magazine will be the go-to source for all official Boston Pride-related information, events, performances, activities, etc. This official guide has the lowest rates around and is the only one that gives back to Boston Pride. Your ad makes a difference!

The Official 2012 Boston Pride Guide will be available throughout Boston Pride week at numerous venues, events and at the Boston Pride rally. It will also be inserted into each issue of The Rainbow Times’ June 7 edition, which has approximately 75K readers throughout New England.

To advertise in this year’s Official Boston Pride Guide, check out the rate card.