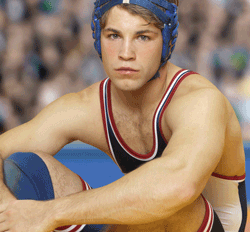 As a volunteer assistant wrestling coach, Philippe Kahn had an easy relationship with the athletes at South High School in Torrance, California. They respected his talents, but like teenagers everywhere, they were wrapped up in their own lives.

Occasionally though, they’d ask about his wrestling career. Where, for example, was he competing now?

“I was honest,” Kahn says. “Still, I’d fudge things. I’d say, ‘Cologne,’ instead of ‘The Gay Games in Cologne.’ But kids aren’t stupid. They have access to Google. You can’t conceal something like that.”

One day after practice, a freshman yelled across the crowded locker room: “Hey, coach. Are you gay?”

Kahn responded, “Sorry to disappoint you, but I already have a boyfriend. You’re out of luck.”

Most wrestlers laughed, defusing the situation. Kahn followed up: “See you tomorrow.”

“No you won’t,” the ninth grader replied.

The reason, Kahn learned later, was that the boy was leaving on vacation. At the moment though, his disappearance seemed ominous.

“He was a smart kid. He was testing the limits,” Kahn says.

The assistant coach was already out to the rest of the staff. “I’m upfront,” he explains. “I don’t lie, deny or misrepresent who I am.” Some of the older wrestlers already knew too. They didn’t care.

Part of their nonchalance was generational. Teenagers today – even athletes – know far more about gay issues than their parents, even their older siblings. They have LGBT friends. They see out gay people on the news, in the media, and (finally) the athletic world. To many teens, homosexuality is a non-issue.

Part of the wrestlers’ ease with Kahn is because of their activity. Wrestling, the coach notes, is “a minority sport.” There is little glamour, and plenty of drudgery. Crowds are small. Friends and family members often treat wrestling with disdain. “Why do you want to roll around on a mat with another guy?” they wonder – and ask aloud.

Wrestlers are passionate. They love the sport’s intense physical and mental demands, its one-on-one competition, the self-confidence it breeds. They revel in being part of a misunderstood minority. They overcome their own doubts, and the questions of others. They learn to laugh when someone calls it a “gay sport.”

In that, his South High charges were no different from Kahn. He discovered wrestling at age 12 in Florida, and was immediately hooked. “The intensity was amazing,” he recalls. “I hadn’t done well in team sports. But I liked being on a wrestling team. At that age, that’s so important.”

It was especially important because, even then, Kahn knew he was gay. He did not look or act “obviously” gay, he says, so he was spared harassment. But as a 140- and 145-pound high school wrestler, he was deep in the closet.

The University of Florida did not have intercollegiate wrestling, so he competed on a club team. Kahn graduated with a degree in journalism and telecommunications, then worked as a news anchor at stations in Florida, Oklahoma and Texas.

Ad dollars dried up after 9/11, though, and after moving to California he became a car salesman. He began with Mini Coopers; soon, he sold BMWs.

But Kahn never lost his love for wrestling. By then totally out of the closet, he found Gene Dermody – the founder of a gay wrestling club in San Francisco, and former president of the Federation of Gay Games. Through Dermody, Kahn learned of gay wrestling organizations in Southern California, where he lived.

He trained for the Gay Games with the Southbay Wrestling Academy, a straight club. Their connection with South High led to Kahn’s coaching career.

In the beginning, he was “standoffish” with the high school athletes. “It was still all about me,” he says. “I was training and competing. I had my own baggage about coaching kids. I worried about things like the perceptions of other people.”

But the more time he spent with teenagers, the more he realized they didn’t care he was gay. And the more he worked with the South athletes, the more he understood the unique role he could play.

He was a role model to the gay wrestlers – without knowing who they were. Yet with 70 student-athletes in the program, Kahn says, “the statistics say they’re there.”

He was a role model to the straight ones too. They ask Kahn questions about life – college, relationships, etc. – that have nothing to do with sexuality. He’s gratified by the respect they show him, and inspired by their maturity.

Philippe Kahn returns that trust and respect. He’s a true role model, showing that being gay is far less important than being a strong wrestler, and an even stronger person.

On and off the mat.

Dan Woog is a journalist, educator, soccer coach and gay activist. His latest book is We Kick Balls: True Stories from the Youth Soccer Wars. He can be reached care of this publication or at OutField@qsyndicate.com.