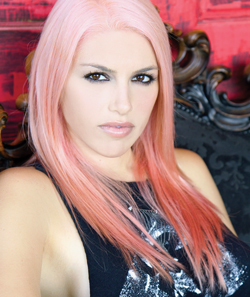 At only 32, Lauren Bedford Russell is both a reality star on The Real L Word’s third season and an accomplished jeweler. Since the end of filming she has spent most of her time bouncing back and forth between New York and Los Angeles. Her company, Lyon Fine Jewelry, has created various charity bracelets, and beginning in January 2013, she will be selling an anti-bullying bracelet. Recently, she took time out of her hectic work schedule to speak with The Rainbow Times.

TRT: Did you always want to be a jewelry designer or did you ever think about pursuing any other careers?
Lauren Bedford Russell: I didn’t know growing up. I definitely have been interested, since I was little, in jewels. My dad is really knowledgeable and really into jewelry and gemstones. But I didn’t decide to go into it until I was living in New York. This was about three years ago, when I decided to start designing the line and actually make it my own business. [It had been] between jewelry and publishing. I was kind of like, “I don’t know what I want to do!” Then I finally decided and went for it.

Q. Is there any particularly item you prefer making?
A. My passion has always been bracelets. But I definitely feel like rings are something that’s more universal. I like to make rings that men and women can wear … Between all types of jewelry, rings and bracelets are my two favorites and that’s what I have the most of in my line. But I see myself putting out more men’s rings soon.

Q. How successful have you been using social media to promote yourself and reach out to fans?
A. It’s so rewarding! I have never been the sort of person to be promoting myself like that, but I feel like it’s all lumped together. To promote my line, I need to promote myself. To promote myself, I need to promote my line. But the important thing for me now is reaching out to the fans, because they have been so amazing. I have really gotten such a great reception from people. [I’ve] been touched by so many people’s messages and words of what’s going on in their lives, and how I’ve affected it, large or small. So that’s been a huge, huge positive result of the show.

Q. Is there one medium that you’d say is your favorite?
A. I think the fans really enjoy Instagram because they don’t get to watch us on television anymore. So the next best thing is pictures. Without overdoing it, I decided to keep that up and show them what’s going in my life. I also have a Tumblr (laurenbedfordrussell.tumblr.com) that I answer questions on …They’ve really praised me for being very active on that and so it’s good for everyone. It makes me feel really good to answer people’s questions [and give] advice … I’m really happy to talk to them.

Q. Would you consider yourself a role model in the LGBT community at this point?
A. Well I would love to be, but obviously there are parts of the show I think about when you say that. I think about getting drunk at Dinah [Shore Weekend] … But people now know that I’m more than a lot of the stuff they show. The real reason they chose me was because I’m a professional, successful entrepreneur. In all those aspects of my work life, and my help with the charities, in those respects I definitely hope to be a role model for sure.

Q. How did your family feel about you going on the show?
A. My family has been really supportive. They’ve been awesome, even when my mom saw my chest on television. My dad actually watched the original drama series The L Word, from the beginning. And he was always like, “You’ve got to watch it! You’ve got to watch it!” So he was one of my first fans, of course he’s a huge fan.

Q. How have you decided to split up the holidays?
A. [Kiyomi and I are] going to Canada the day after my birthday on December 22. Then we fly to San Diego to see my family on the 27, and then right after Christmas my sister is getting married. Then we go to Houston for New Year’s [laughs] like I said all over the place … It’s been one of those situations where if you told me I’d be doing this a little while ago I would’ve said, “I don’t have the energy.” But when you’re in it, you get some sort of adrenaline that kind of pulls you through.

Q. Is there any word on a fourth season of The Real L Word coming out?
A. You know we’ve all, every single one of us, not really heard a definitive answer. We’re supposed to find out at the end of December. We’re all kind of wondering what’s going on. So I don’t know, we’ll see. You’ll definitely find out when we do, we’ll definitely let people know.

To find out more about Lauren Bedford Russell and her Lyon Fine Jewelry and Charity Bracelet line, visit www.lyonfinejewelry.com.