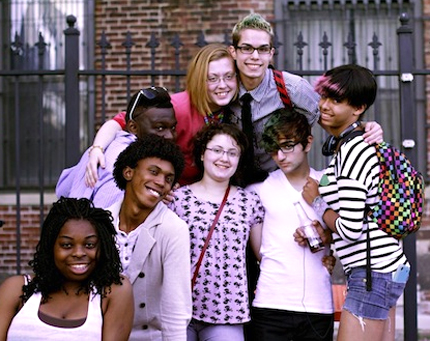 BOSTON – The Theater Offensive will house the newly-formed Pride Youth Theater Alliance (PYTA), a national network of arts organizations with programs focused on lesbian, gay, bisexual, transgender and queer (LGBTQ) youth theater. Thanks to the Mutki Fund’s commitment to supporting queer youth theater, national LGBTQ youth organizations are teaming up to strengthen the field of theater for young audiences.

The PYTA is comprised of 16 groups nationwide, including The Theater Offensive’s True Colors: OUT Youth Theater, Chicago’s About Face Theatre and Omaha’s Rose Theater Pride Players, as well as organizations from San Francisco, New York, Toronto, Lexington, and all across the continent.

The PYTA was formed to create successful models for programs and share them with other organizations doing this work nationally and internationally. Many youth development theater programs do not address the serious issues LGBTQ youth face, including bullying, being rejected by their families, homelessness, discrimination, violence, depression, and suicide.

“After 18 years of working in the queer youth theater field, this is a landmark moment for TTO’s leadership,” said Abe Rybeck, Exeuctive Artistic Director of The Theater Offensive. “I wish the hundreds of young people who’ve taken part of True Colors since 1994 could be here to celebrate. But maybe more importantly, they’re all out in the world now carrying on the work we did together.

From July 26-29, PYTA directors from across North America will gather at the Boston Center for the Arts for the third annual Mutki Queer Youth Theater Directors’ Retreat. The Theater Offensive staff will lead workshops as well as introduce the first PYTA Programs Coordinator, based at The Theater Offensive.  On Thursday evening, True Colors youth will welcome the group to Boston with a performance based on original work by True Colors over the years.

The Theater Offensive’s history and current programming are rooted in collaboration.  The Theater Offensive organizes locally by creating partnerships with community–based organizations, such as BAGLY, HBGC and Boston GLASS, to effectively execute programs that have an impact on audiences, particularly those in Dorchester, Roxbury, Jamaica Plain, and the South End neighborhoods.

The issues and challenges faced by LGBTQ youth have come to the forefront of the national psyche in recent years, and many theaters not dedicated to LGBTQ work have attempted to use theater as a means to address them. The PYTA marks the first time that theaters and organizations from around the nation have had an outlet to deeply share knowledge, resources, and experience with each other and contribute it to the field at large. By coordinating these organizations, recording and sharing the impact of their work, the PYTA is poised to influence the national Theater for Young Audiences field.

The Theater Offensive OUT in Your Neighborhood engages local community members in creating art that gives voice to the diversity of LGBT experience where we live, work and play. TTO’s year-round community-based workshops, intensive engagement with at-risk youth to end bullying, and free street theater performances are focused in Roxbury, Dorchester, Jamaica Plain and the South End.

The Mukti Fund was founded in 1983 by Mike Dively and Marty Dupuis. For its first two decades, the Mukti Fund concenrated its grant-making in the Eastern Caribbean country of St. Kitts and Nevis, where it supported programs to strengthen sustainable development in this newly independent country, with a focus on grants for the preservation and conservation of the country’s environment and its historic and cultural heritage. From 2005 to 2008, the fund supported gay and lesbian youth empowerment. In 2009, the Queer Youth Theater program was started.