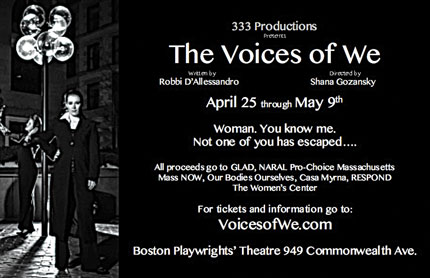 BOSTON, Mass.—Award-winning Boston area stage and screenwriter, Robbi D’Allessandro, explores the many faces of shame as 333 Productions presents the World Premiere of her original play, The Voices of We, at the Boston Playwrights’ Theatre from April 25 to May 9.

The Voices of We is a new full-length play that explores the challenges women face in today’s sociopolitical and economic climate. The diverse and richly authentic characters inThe Voices of We, face the daunting challenges inherent in the fight against domestic violence, and struggle for reproductive rights, self-defined gender identity, motherhood, positive body image, and more.

The inspiration for The Voices of We came from a monologue D’Allessandro wrote about a young Pentecostal woman in the deep south who desperately seeks the true nature of God. In writing this monologue, D’Allessandro realized that for the oppressed, the deepest wounds often stem from the hypocrisy and marginalization experienced within their own communities. D’Allessandro says, “It is one thing when society takes exception to one’s race, gender, gender identity, and sexual orientation, it is quite another when those disconnects happen with those closest to you; the former being familiar and anticipated, while the latter is unexpected and wrought with betrayal.” [pullquote]The diverse and richly authentic characters inThe Voices of We, face the daunting challenges inherent in the fight against domestic violence, and struggle for reproductive rights, self-defined gender identity, motherhood, positive body image, and more.[/pullquote]

For D’Allessandro shame is the insidious and unrelenting by-product of oppression that impedes the innate strength of women’s psyche. This belief prompted D’Allessandro to personify shame in The Voices of We as Anaideia, an interstitial character named for the Greek word for “shame.” Anaideia is described by D’Allessandro as, “gleefully nefarious, and one who embodies the depth and breadth of pain and feigned joy.”

All of the characters in The Voices Of We struggle to reconcile their hunger for authenticity in the face of deeply embedded societal norms and expectations. While the struggles of these characters are dramatic and often deeply sorrowful, the play is tempered with D’Allessandro’s celebrated sense of humor, compelling insight, and wit. Whether it be the comedic, and all too urgent, experience of a mother-to-be forced to give birth in the backseat of a broken down car with no one to help but her hapless husband, or the frantic call from a child to a 911 dispatch operator to report a domestic violence incident still in progress, The Voices of We is sure to take its audience on a journey that is both edifying and emotionally gripping.

D’Allessandro received her MA at Northeastern University in Personality and Social Psychology, and an MFA at Lesley University in Stage and Screenwriting. She is the winner of the Kennedy Center Paula Vogel National Playwright’s Award, and an Abingdon Theatre Christopher Brian Wolk Award Nominee. She was a Visiting Fellow at the renown Eugene O’Neill National Playwrights’ Conference and has won multiple awards in television and screenwriting. She has also been contracted for the adaptations of Dean Morrisey’s best-selling children’s book, Ship of Dreams and Ronald Drez’ Twenty-Five Yards of War: The Extraordinary Courage of Ordinary Men in World War II.

All proceeds from the performance of The Voices of We will be donated to organizations that support the advancement of women and women’s issues. In particular the production will honor the Massachusetts Chapter of the National Organization for Women; NARAL Pro-Choice Massachusetts; Our Bodies, Ourselves, GLAD, Respond and The Cambridge Women’s Center.

The Voices of We will be performed at the Boston Playwrights’ Theatre located at 949 Commonwealth Avenue in Boston. It was founded in 1981 by Nobel Laureate Derek Walcott.  The Boston Playwrights’ Theatre is an award-winning professional venue that believes the successful development, production, and promotion of new plays is key to continuing theatrical achievement in New England and nationwide.