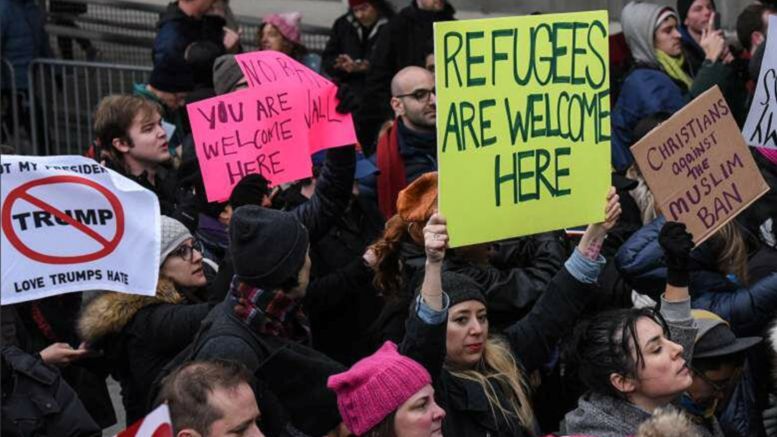 Although a federal judge ordered a stay against Donald Trump’s Muslim Ban, demonstrators from Boston to San Francisco continued to protest at airports in over 30 cities in the U.S. for a second day in a row last weekend. Waving pro-immigration signs and chanting against the Trump administration’s Muslim ban, treatment of refugees and immigrants. Immigration attorneys, national security experts and civil rights organizations all criticized the order considering it un-American and a violation of the U.S. Constitution.

Mother Jones reported that the ruling—“handed down by the American Civil Liberties Union, ACLU, as a first stinging rebuke in Trump’s first week—protects deportation refugees or visa holders who were detained at American airports since the signing of the so-called ‘Muslim ban.’ It also protects those in transit when the emergency ruling was filed.”

“At John F. Kennedy International Airport last night, Hameed Khalid Darweesh arrived and was immediately detained. Darweesh worked as interpreter for the Army’s 101st Airborne Division and, according to Brandon Friedman, a platoon leader in Iraq, saved countless U.S. service members’ lives,” said Anthony D. Romero, ACLU Executive Director, via the ACLU’s website. “We don’t know how many other refugees and foreign nationals with green cards or visas might have been detained when they tried to make their way into the United States today, but we intend to find out. We are asking anyone with any information to get in touch with the ACLU.”

And intent was at the helm of it, the ACLU claims.

“We have no doubt that the motivation behind the executive order was discriminatory,” explained Romero in his statement. “This was a Muslim ban wrapped in a paper-thin national security rationale.”

Attorneys to the rescue

The ACLU, along with other organizations jumped into action to challenge Trump’s executive order in court as a violation of the “Due Process and Equal Protection Clauses of the U.S. Constitution.” The lawsuit was on behalf of two men detained at New York’s John F. Kennedy International Airport.

“We immediately got a hearing and argued our case. At around 9 p.m., Federal District Court Judge Ann M. Donnelly issued a stay, blocking President Trump’s discriminatory policy from taking effect and preventing refugees and immigrants from being deported,” added Romero.

According to CNN, the White House maintained Sunday that “the ruling does not undercut the executive order,” amid hundreds of protests still happening at airports around the country.

During last weekend, LGBT Rights organizations, attorneys on the ground, family and overall protesters in the U.S. and abroad, assisted families and recorded the demonstrations live via social media, sending yet the strongest message to Trump that they won’t stand still in the face of injustice. The bill’s name: “Protecting the Nation from Foreign Terrorist Entry into the United States,” elicited immediate condemnation from people and organizations all over the world. The order banned immigration from seven, primarily Muslim nations, and indefinitely blocked Syrian refugees from seeking asylum, according to the Advocate.

It imposed a 90-day suspension of travel from Syria, Iran, Iraq, Sudan, Libya, Somalia, and Yemen. Trump, who maintained that the action was to keep out “radical Islamic terrorists,” also imposed a religious test that, in the future, would favor Christian immigrants over Muslims.

As if signing the order wasn’t enough for Trump, he then added insult to injury as he verbalized his feelings at the signing.

“We don’t want them here,” Mr. Trump said during the order’s signing, reported The New York Times. “We want to ensure that we are not admitting into our country the very threats our soldiers are fighting overseas. We only want to admit those into our country who will support our country, and love deeply our people.”

Since leaving the White House, less than 10 days prior, former President Barack Obama made his first statement early this week, signaling his support with anti-Trump protests and protesters across the nation. With one of the highest approval ratings upon leaving office, the former President expressed, through his spokesperson Kevin Lewis, that “American values are at stake.”

“Citizens exercising their Constitutional right to assemble, organize and have their voices heard by their elected officials is exactly what we expect to see when American values are at stake,” the statement read, as Politico reported.

In addition, President Obama “is heartened by the level of engagement taking place in communities around the country,” Lewis added. “With regard to comparisons to President Obama’s foreign policy decisions, as we’ve heard before, the president fundamentally disagrees with the notion of discriminating against individuals because of their faith or religion.”

The Human Rights Campaign reacted to the order and the dangers it brings on LGBTQ people.

Janson Wu, Executive Director of GLBTQ Legal Advocates & Defenders, GLAD, focused on immigration as the core of American life and what curbing it can cause to the LGBTQ community.

“Targeting immigrants, Muslims, and refugees inverts what we know to be America at its best: a country that is made stronger by diversity and a country with freedom—including freedom of religion—as a core value. As the proud son of immigrants, I have witnessed the power of that American ideal firsthand. We in the LGBTQ community stand in solidarity with all immigrants, asylum seekers, and refugees, LGBTQ and non-LGBTQ, at this dark moment. The executive orders are not only un-American, they are ineffectual if they are meant to make America ‘strong.’ They in fact weaken us by dividing us, and we refuse to be divided.”

The NCLR, through its Executive Director, Kate Kendell, Esq. also reacted to the discriminatory order by stating the damages it causes to society as a whole.

Some Republicans lead opposition of the ban

Two Republican Senators, John McCain (R-Ariz.) and Lindsey Graham (R-S.C.) raised questions about the order on Sunday when they issued a joint press release, according to the Hill.

“It is clear from the confusion at our airports across the nation that President Trump’s executive order was not properly vetted. We are particularly concerned by reports that this order went into effect with little to no consultation with the Departments of State, Defense, Justice, and Homeland Security,” they said. “This executive order sends a signal, intended or not, that America does not want Muslims coming into our country. That is why we fear this executive order may do more to help terrorist recruitment than improve our security.”

And as the chant was heard through airports around the U.S.: “the people united, will never be divided,” so was their resolve to continue to protest injustice coming from the Oval Office.

“The United States is a nation governed by the rule of law and not the iron will of one man,” stated ACLU’s Romero. “President Trump now has learned that we are democratic republic where the powers of government are not dictatorial. They are limited. The courts are the bulwark of our democracy that protects individual rights and guards against the overreaching of an administration that confuses its will for the American public’s.

“Tonight was one of the most incredible experiences of my life, one that demonstrates that the people united will never be divided. This is only the beginning. This is merely the first skirmish in a long battle to vigorously defend the Bill of Rights from the authoritarian designs of the Trump administration. Savor this victory tonight, but prepare to fight on.”

Immigration And My Own DNA Ancestry, a Newly Found Identity