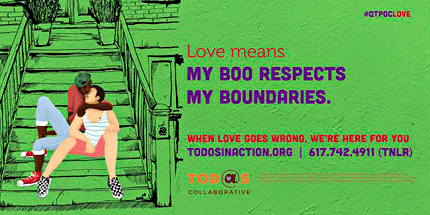 BOSTON, MA — The TOD@S Collaborative today launched a public awareness campaign in the Boston area about how to recognize and address partner abuse in lesbian, gay, bisexual, queer, and trans (LGBQ/T) communities. The campaign will feature advertisements [see below] on MBTA buses, subway cars and bus shelters, as well as social media, local print, radio, and digital news outlets throughout Greater Boston during the month of October, which is national Domestic Violence Awareness Month.

The TOD@S Collaborative launched the campaign today with a kickoff event for social service providers at Unitarian Universalist Urban Ministry in Roxbury, in partnership with Jane Doe, Inc.

The campaign, entitled “Celebrating #QTPOClove,” depicts healthy relationships among queer/trans people of color (QTPOC) by featuring original illustrations of diverse LGBQ/T couples of color. The ads, created in English and Spanish, use the tagline “Love means…” with examples of healthy and supportive relationships within LGBQ/T communities of color. The campaign also introduces the hashtag #QTPOClove on social media platforms to invite members of LGBQ/T communities of color to share their own depictions or definitions of healthy, loving relationships.

“In a world where LGBQ/T people of color are underrepresented in the media and in U.S. society in general, campaigns like this one help showcase healthy, loving and supportive relationships between LGBQ/T people of color and increase the visibility of our community as well as the resources available to us,” stated Corey Yarbrough, Executive Director of the Hispanic Black Gay Coalition (HBGC), one of four organizations that comprise the TOD@S Collaborative.

The campaign also seeks to broaden the public’s understanding of various forms of partner abuse and connect survivors of partner abuse to services. Campaign messaging includes a 24-hour hotline number – 617-742-4911 – operated by The Network/La Red, for individuals to call “when love goes wrong.”

The TOD@S Collaborative works to support LGBQ/T people of color who are survivors of domestic violence and partner abuse. TOD@S is an interagency collaboration among the Hispanic Black Gay Coalition, The Network / La Red, Renewal House Shelter (a program of the Unitarian Universalist Urban Ministry), and The Violence Recovery Program at Fenway Health. Through the collaborative, the agencies work together to improve and increase access to intervention and prevention services for LGBQ/T people of color affected by partner abuse and domestic violence.

TOD@S also will host a community event for the campaign on October 15, 2015, 6:30 – 8:30 p.m., at Makeshift Gallery, 549 Columbus Ave in Boston’s South End. LGBQ/T individuals of color and allies are welcome to attend to learn more about the campaign and hear stories about how partner abuse impacts LGBQ/T communities of color.

For more information on the TOD@S Collaborative and the “Celebrating #QTPOClove” campaign, please visit todosinaction.org.

The campaign is funded by a federal grant from the Office of Violence Against Women (OVW) in the U.S. Department of Justice.