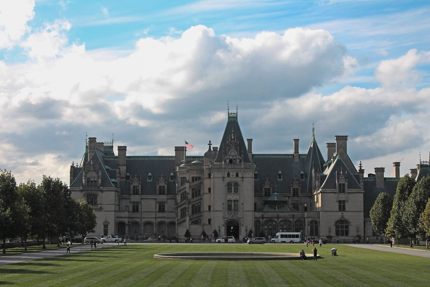 One of the America's most celebrated homes, the over-the-top mansion at Biltmore Estate.
Photo: Andrew Collins

One of the America’s most celebrated homes, the over-the-top mansion at Biltmore Estate.
Photo: Andrew Collins

By: Andrew Collins/Special to TRT—

If you’ve been keeping up with the country’s most buzzed-about hipster destinations of late, you’ve probably heard Asheville mentioned in the mix, perhaps alongside cities like Austin, Brooklyn, and Portland, Ore. This relatively small mountain metropolis in western North Carolina has long been a creative-spirited, relatively progressive island in one of the nation’s more socially conservative regions. LGBT-owned businesses, top-notch art galleries and furniture studios, along with inviting Victorian and Arts and Crafts-style inns – and independently owned shops, music clubs, theaters and cafes – have thrived here for decades, but more recently, the Asheville has cultivated an urbane, artisan-driven food and drink scene that’s particularly impressive for a city with just around 85,000 residents.

With a fairly reasonable cost of living and a moderate climate, Asheville (www.exploreasheville.com) is becoming a popular place to relocate among not just hipsters but all sorts of professionals of all ages, many from larger and more crowded cities. Additionally, young college grads are moving in at a steady pace – something that seldom happened in Asheville before the city began to undergo a renaissance a couple of decades ago. This leafy, hilly community just a 2-hour drive from Charlotte, a 3.5-hour drive from Atlanta and a 4.5-hour drive from Nashville has become a top weekend destination, too, with a sizable gay following.

Downtown Asheville rests like a saucer balanced precariously amid the slopes of forested hills and mountains. It’s an impressively preserved city, with dozens of fine old buildings, many of them striking Art Deco beauties. The surrounding Blue Ridge Mountains account for much of the region’s appeal – it’s an hour’s drive west to reach Great Smoky Mountains National Park. You can also navigate a stretch of the winding, scenic Blue Ridge Parkway, which passes right through the center of Asheville on its way north toward Virginia. Many other state parks and forests are within a short drive, and right in the city you can appreciate nature with a hike through the 10-acre Asheville Botanical Gardens or the 434-acre North Carolina Arboretum.

The downtown area is great for strolling – it’s also quite hilly, though, so prepare to get some exercise. Be sure to stop by the Asheville Art Museum, which has a celebrated collection of contemporary American works, and if you’re a fan of modern American literature, don’t miss the Thomas Wolfe Memorial, which includes a visitor center and the boarding house in which the author of ­­You Can’t Go Home Again grew up. [pullquote]With a fairly reasonable cost of living and a moderate climate, Asheville (www.exploreasheville.com) is becoming a popular place to relocate among not just hipsters but all sorts of professionals of all ages, many from larger and more crowded cities. [/pullquote]

Almost every visitor to Asheville pays a visit to the Biltmore Estate (www.biltmore.com), one of America’s few true castles. The 250-room mansion and resplendent grounds were commissioned by the phenomenally wealthy railroad tycoon George Vanderbilt and executed by Richard Morris Hunt in 1895. Touring the mansion’s grandiose, if rather solemn, interior can feel a bit overwhelming, especially on a sunny day, but the 8,000-acre property’s outdoor features are arguably its greatest draw—you could easily spend the day sauntering along the 2.5 miles of paths through the gorgeous manicured gardens, or along the many more rugged trails through dense woods and open meadows. Other highlights include the Biltmore Winery, the working dairy farm at Antler Hill Village, and the Outdoor Adventure Center, where you can book a wide range of activities, from river float trips to bike excursions. Right on the property, the luxurious, 213-room Inn on Biltmore Estate offers swank accommodations, and nearby Biltmore Village abounds with upscale shops and restaurants.

A little southwest of downtown and northeast of Biltmore Estate, you’ll find one of Asheville’s more recent developments, the rapidly evolving River Arts District (www.riverartsdistrict.com), which is home to both new buildings and converted industrial spaces now filled with art galleries and studios, as well as a handful of cool restaurants and nightspots. The neighborhood extends north along Lyman Street from across the river from French Broad River Park all the way to the I-240 bridge, with plenty of businesses on both sides of the railroad tracks, which bisect the neighborhood.

With its rapidly emerging culinary scene, Asheville has become a favorite foodie hub. Highlights are many, but here are a handful of notables. Chef-owned by a team who trained with famed Spanish elBulli chef Ferran Adrià, Cúrate (www.curatetapasbar.com) is one of the hottest spots in town, turning out authentic tapas with creative twists – consider the Catalan sausage bocadillo (baguette sandwich), or the tender skewered lamb marinated in Moroccan spices. The owners also operate the trendy and eclectic restaurant and cocktail lounge, Nightbell (www.thenightbell.com), just around the corner. Another top table is Rhubarb (www.rhubarbasheville.com), a sleekly swish bistro helmed by chef John Fleer and situated across from the Asheville Art Museum. Favorites from the contemporary Mediterranean menu include rabbit-leek rillettes, octopus a la plancha, and charmoula-grilled flat-iron steak. A snazzy spot specializing in locavore-minded cuisine, Table (www.tableasheville.com) has an intimate, insider vibe and serves tempting victuals like duck confit with carrots, fennel kraut and medjool dates in its handsome street-level dining room. Head upstairs to the bar, Imperial Life (imperialbarasheville.com), for lighter late-night snacking and old-school cocktails.

Set inside one of Asheville’s landmark 1920s buildings, the Grove Arcade, you’ll find a wonderful wine bar and tap room, Sante (www.santewinebar.com). On the other side of the arcade, Carmel’s Restaurant and Bar (www.carmelsofasheville.com) specializes in contemporary seafood and American fare and has a handsome little dining room plus plenty of seating outside along the sidewalk. Next door, you can browse thousands of new and used tomes and sip bubbly at the whimsical Battery Park Book Exchange & Champagne Bar (www.batteryparkbookexchange.com).

A neighborhood very much on the rise and becoming increasingly popular with the LGBT set, West Asheville is a short hop from downtown and is home to a handful of inviting, laid-back eateries, including Biscuit Head (www.biscuitheads.com), where you can tuck into a plate of fluffy biscuits prepared in a variety of ways (sweet potato-coconut gravy, with fried green tomatoes and poached eggs); and Oyster House Brewing (www.oysterhousebeers.com), a fun little neighborhood spot that specializes in Southern pub fare.

Good spots for casual snacking include City Bakery Café (www.citybakery.net), an airy space with a few tables on the sidewalk and superb sandwiches; Dobrá Tea (www.dobrateanc.com), a Czech-inspired tearoom with tasty Middle Eastern food; and funky Izzy’s Coffee Den (www.izzyscoffeeden.com), which fits the bill for high-octane java, craft beer and simply hanging out and people-watching. French Broad Chocolate Lounge (www.frenchbroadchocolates.com) handcrafts exquisite truffles, caramels and bars of chocolate – you can also sip wine, beer and coffee in a cozy lounge space. One of the most venerable indie bookstores in the South, Malaprops Bookstore and Café (www.malaprops.com) has a large LGBT section and a nice little coffeehouse inside. And also very popular with the gay crowd, Edna’s of Asheville (www.ednasofasheville.com) is on the north side of the city and serves terrific coffee drinks, breakfast fare and sandwiches.

Virtually all of Asheville’s nightspots, including many of the drink-centric restaurants described above, have a strong following with the LGBT crowd. There are also a few predominantly gay hangouts, the largest being the Grove House Entertainment Complex (www.thegrovehouse.com), a rambling building that contains Scandals dance club, the Boiler Room live-music venue, and Club Eleven on Grove for events and parties. Nearby Club Hairspray (www.clubhairspray.com) is beloved for its kitschy interior, entertaining drag (queen and king) shows and friendly vibe. Drawing a mostly male crowd, O’Henry’s (www.ohenrysofasheville.com) is a fun neighborhood hangout that’s particularly popular with bearish types and fans of leather – the bar has been going strong for more than 35 years and adjoins neighboring dance bar, the Underground. Downtown bar-hoppers might want to stop by Smokey’s After Dark (www.facebook.com/smokys.afterdark), a laid-back, no-attitude neighborhood spot that’s fun for shooting pool and meeting locals. And women-owned Tressa’s (www.tressas.com) – with live jazz and blues, comedy, and dancing – has a loyal following in the LGBT community.

Asheville has several inviting, gay-friendly inns, from upscale historic mansions to cozy Arts and Crafts cottages. The city’s most renowned accommodation is the Grove Park Inn Resort and Spa (www.groveparkinn.com), one of the nation’s foremost historic hotels, which has been fully restored to its original 1913 Arts and Crafts design. You’ll find one of the South’s most impressive spas on the lower level, and restaurants and bars affording panoramic views of the city skyline and surrounding mountains. Among the dining options, don’t miss Edison, which serves tasty small-plates fare (goat-cheese flatbread, an awesome burger with bacon jam and American cheese) and terrific craft beers. Even if you don’t stay here, sitting in the grand lobby before the enormous fireplace, and looking out over the countryside from the terrace is a real treat.

Herb and rose gardens surround the 1889 shingle-style White Gate Inn & Cottage (www.whitegate.net), one of the city’s gay-owned properties (commitment ceremonies are frequently held here). The romantic, antiques-filled rooms have Wi-Fi and flat-screen TVs with DVD and CD players – they’re named for poets (Whitman, Wilde, Sandburg, etc.), and one cottage has a gas fireplace and full kitchen. Also gay-owned and a 10- to 15-minute drive north of downtown, the 1847 Reynolds Mansion B&B (www.thereynoldsmansion.com) has 13 beautiful rooms (many with gas or wood fireplaces), a seasonal pool and lavish three-course breakfasts included in the rates. Another stunner is the shingle-style Inn on Montford (www.innonmontford.com), which dates to 1900 and sits on beautifully landscaped grounds that include the largest Norway maple tree in North Carolina. Rooms contain a priceless mix of 18th- and 19th-century English and American pieces.

Fans of larger chain properties should consider the contemporary Aloft (www.aloftashevilledowntown.com), which is right on Biltmore Avenue, steps from a number of great restaurants, bars and shops. With super-clean rooms and terrific service, the Hampton Inn Asheville-Tunnel Road (www.hamptoninn3.hilton.com) ranks among the best mid-priced chain options in the region. And with a convenient location near the Grove Arcade, the sleek Hotel Indigo Asheville (www.ihg.com) is another great choice, with crisp, attractive rooms – the penthouse suites on the upper stories have floor-to-ceiling windows and amazing views of the countryside.

*Andrew Collins produces the website GayTravel.About.com and writes about travel for a variety of LGBT and mainstream publications. He can be reached care of this publication or at OutofTown@qsyndicate.com.