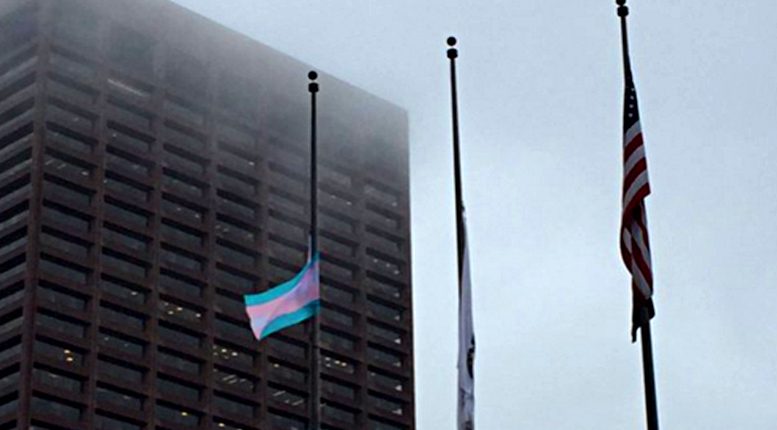 The Trans Flag was raised for the first time ever at Boston City Hall today.

BOSTON—Massachusetts Governor Charlie Baker has subtly indicated that he will not veto a pending bill in the Legislature that would provide explicit legal protections for transgender people in public spaces such as retail stores, restaurants and parks. Prior to Baker’s recent statement, the governor cut short his speech at an LGBT networking event last month after a public demonstration where he was confronted by members of the transgender community and their allies.

The Boston Globe recently reported that an interview with Jim Braude and Margery Eagan on WGBH’s Boston Public Radio paired with a statement from the Governor’s office given to the Globe hinted that Baker may not veto the bill.

“Governor Baker believes people should use the restroom facility they feel comfortable using,” a spokesperson for the Governor’s office reportedly told the The Boston Globe.

The comment was an addendum to Baker’s standard rhetoric on the bill in which he states that the “devil is in the details” and that he won’t make a decision until a draft of the legislation makes it to his desk.

On May 2, for the first time ever in the history of the Commonwealth, the city of Boston raised the transgender pride flag outside of City Hall. Freedom Massachusetts, which is advocating for the passage of the bill, sent out a statement signed by Boston Mayor Marty Walsh and Boston City Council President Michelle Wu following the flag raising.

The ceremony, read the email, is part of an “effort to continue to send a message to Massachusetts lawmakers that it is time to pass HB 1577/SB 735 and fully affirm the dignity of transgender Bay Staters.”

On April 29, Freedom Massachusetts’ website listed Salem as the fourth in a “growing list of municipalities supporting SB 735/HB 1577 … known collectively as #TransBillMA.” The Salem City Council voted unanimously to pass a resolution in support of the two bills. Salem, which has had a local public accommodations ordinance in place since 2014, was the fourth municipality—after Somerville, Easthampton and Boston—to pass a resolution supporting the statewide bill.

“Our City Council unanimously adopted a resolution [on April 29] in support of extending protections for our transgender neighbors, friends and family members throughout Massachusetts,” said Salem Mayor Kim Driscoll via Facebook. “We have a fully LGBT inclusive non-discrimination local ordinance and we hope the Commonwealth will act to pass the #TransBillMA and ensure full protections for transgender people throughout Massachusetts!”

State Representative Paul Tucker (D-MA), had been working with advocates and colleagues to “fully protect our transgender community,” he said to TRT via e-mail.

“I have been proud to play a role in getting this bill to a vote and become law, which I am hopeful will happen soon,” said Tucker. “I have spoken at State House rallies, met with advocates and colleagues and will do anything I can to fully protect our transgender community.”

It is expected that the Senate will vote on the bill in mid-May.

The April 21 Globe story came a little over a week after members of the trans community and their allies held an informational action at an LGBT networking event sponsored by Boston Spirit Magazine that quickly escalated into a heated exchange with the Governor.

“Let me say one other thing … I didn’t run for governor to work on the opioid issue. The opioid issue came to me from conversations I had with people as I was campaigning. The most powerful voices in this conversation have been the families and the individuals who’ve reached out to people in the administration, in my office, and in conversations with me. Their stories and the bravery that comes with them, is compelling, it’s affecting, it’s real and it’s an incredibly important part of understanding. And my recommendation to all of you is that you continue to have those conversations … ” Governor Baker continued until he was cut off by jeers and abruptly walked off the stage after wishing the audience a great night.

Wearing green and sporting stickers with the word “APPROVED,” participants in the action walked around the fourth floor ballroom having conversations with event attendees about the public accommodations bill.

“Ninety percent of the conversations went very well,” said Chastity Bowick of Worcester prior to the Governor’s speech. “A lot of people are still wondering what’s going on with the bill.”

The night took a bitter turn 20 minutes into Governor Baker’s speech. Several people quietly lined the front of the stage with signs proclaiming, “Pass the bill, not the buck,” “Let us pee in peace … flush away transphobia,” “Let us dine in peace,” and “Public spaces = our spaces.”

Governor Baker spent most of his speech discussing his accomplishments since first taking office in January 2015, including passing legislation on the opioid crisis, addressing infrastructure issues within the Massachusetts Bay Transportation Authority (MBTA), strengthening the Massachusetts Health Connector and amending the state’s supplier diversity program to be more accessible to LGBT-owned businesses. Baker also lauded the fact that he was one of the few sitting Republican governors to sign on to an Amicus brief to the United States Supreme Court supporting marriage equality and choosing an openly gay running mate, Richard Tisei, when he ran for governor in 2010.

“And you have my commitment tonight that if and when the bill gets to my desk I will make sure to talk to all parties involved before we make any decisions,” Baker said as groans arose from the crowd. He then encouraged the crowd to be more vocal on the issue with his office.

“He just fed us the same lines he’s been feeding us all along,” said Sasha Kaufmann, a co-organizer of the action. “He said that we are a leader. Well you don’t lead through silence.”

“Well, [the action] was disruptive,” said Caleb Stewart, who witnessed Baker’s speech and the jeers from the crowd. “I would have liked to have heard the Governor speak more on the subject and I think that he was expecting to do so and they drowned him out in a very rude way. I think he is willing to listen and I think their approach really is more alienating than positive.”

“The reason I invited Governor Baker to speak at Boston Spirit’s Executive Networking Night was not to slight our brothers and sisters in the transgender community but to wholeheartedly support them … as has always been the case at the magazine,” said David Zimmerman, publisher of Boston Spirit Magazine. “For months many in the LGBT community have been asking the Governor to step forward and comment on the public accommodations bill. I, and everyone at Boston Spirit, agree that the Governor and everyone in the state [Legislature] … should step forward and comment. To that end, I asked the Governor to attend our event tonight, stand in front of the community, and be heard.”

Zimmerman noted that, while the magazine typically avoids political issues, he and the publication’s staff felt that inviting Baker to speak at the event was an opportunity to, “ … advance the conversation around the bill and increase support for its passage.”

According to Carly Burton, campaign manager for Freedom Massachusetts, a coalition of national and local LGBTQ advocacy organizations leading the effort for passage of the bill, more than 250 businesses, 16 women’s and advocacy groups, and every professional sports team in New England have voiced support for the legislation. Massachusetts Attorney General Maura Healey has also played an active role in lobbying for the bill’s passage.

Currently, the public accommodations bill is stalled in the Legislature and supporters of the bill are trying to sure up a veto-proof vote before the House votes on the bill and sends it to the Senate. If the Senate votes in favor of the bill, it will move to the Governor’s desk. If Governor Baker vetoes the bill, it will then go back to the state Legislature, which can then override the veto, but only if two-thirds of the legislators in both the House and Senate vote in favor of doing so (27 state senators and 107 state representatives).

If the bill is passed in Massachusetts before the end of this legislative session, the Commonwealth would become the 18th state to have a law with explicit language protecting gender identity in public spaces. For more information on the campaign to pass the public accommodations bill, visit www.freedommassachusetts.org.

Reactions to the momentum were immediately seen via Twitter.

There is nothing to fear from being inclusive. We are stronger when everyone has the same protections. #TransBillMA pic.twitter.com/GwdzDrzfYk

Everything the light touches are public accommodations. We'll keep fighting until everyone is welcome. #TransBillMA pic.twitter.com/57EluQqbt6