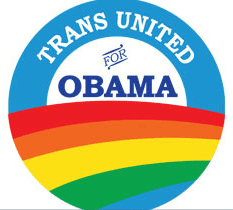 WASHINGTON — Trans United for Obama, a national volunteer effort, has launched a campaign to rally transgender people, their allies, families, and supporters in the re-election campaign of President Barack Obama.

The campaign, organized by a group of transgender advocates, educators, bloggers, authors, and their families and allies, aims to educate people about the historic changes that the Obama Administration has accomplished in the past three and a half years to secure equal rights and protections for all Americans, including transgender people.

Among the victories achieved during President Obama’s first term is the removal of onerous and outdated requirements to change gender markers on legal documents such as passports, immigration documents, federal employee records, Veterans’ Administration records, and birth certificates for American citizens born outside of the US.  In addition, discrimination based on gender identity is now banned in areas like federal employment and public housing programs, and President Obama signed the first federal law aimed at addressing the rampant violence that transgender people face.

Trans United for Obama (TU4O) will work closely with the president’s campaign and will hold regular national calls to coordinate and boost trans and allied people’s participation in the re-election campaign. One of its goals is to register new trans voters and support others who may be prevented or discouraged from voting by new and discriminatory voter ID laws in several states. Supporters can register at the website to volunteer, donate money to the campaign through the grassroots fundraising site, and express their support for the re-election of President Obama and for his ongoing efforts to secure equal rights for transgender Americans.