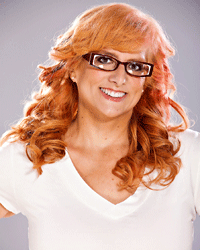 By: Diane Anderson-Minshall*/Special to TRT—

Let me tell you about a woman I met. Let’s call her Trina. On the surface, we have some similarities. A woman of color and a bottle blonde, Trina grew up feeling like she never fit in. Shuffled between family members, she left home early in an effort to be herself, and ended up homeless at one point.

Like my husband, Trina is transgender. Unlike my husband, who grew up in a white middle-class family and has a master’s degree, Trina doesn’t have insurance (yes, even in this age of Obamacare), worries about affording her hormones, and has had to do a lot of things to be the person she is. That includes turning the odd trick or two. [pullquote]Transgender women are 49 times more likely to have HIV than the general population.[/pullquote]

She has HIV. When she tested positive last year, it wasn’t a surprise to her or to the other women in her trans support group, which meets at her local LGBT center each Wednesday night. It’s one of the few places Trina feels at home, accepted, able to be honest. And many of the women are also HIV-positive.

Both studies argue that trans women are the most at-risk population around the globe. The numbers are even worse for those who are women of color; 56 percent of black trans women have HIV. That’s over half.

According to the Centers for Disease Control and Prevention, transgender women involved in sex work have HIV rates that are almost twice that of trans women not engaged in commercial sex work. They’re also six times more likely to be living with HIV than other female sex workers.

Perhaps you’re ready to turn the proverbial page because you think women who do sex work deserve it. They don’t.

My friend Trina gave blow jobs to help afford the hormones she needs every two weeks to continue living as a woman. Going off hormones would give her serious medical issues. The waiting list to get into her local clinic was two months. She’s had bad experiences with doctors who refused to treat her because she’s transgender. She’s not alone: The Task Force’s 2011 study, “Injustice at Every Turn,” reports that approximately one in five trans people in the United States has been denied medical care as a result of their gender identity.

She’s also shared injection needles not for drugs, but at a pumping party, where trans women get low-cost fillers to create a more feminine look in their faces, breasts and hips.

As a once-homeless trans teen – over 40 percent of homeless teens are LGBT, according to a 2011 Williams Institute study – Trina has had to do plenty of things that put her at risk for HIV.

But that’s not how she got HIV. Like the majority of HIV-positive people today, Trina became HIV-positive during a relationship that she believed was monogamous. The man she loved was not monogamous – and he was not aware that he had HIV.

Today Trina is on antiretrovirals and sees a doctor at a clinic who knows how to treat trans people living with HIV. Those are few and far between. [pullquote]LGBT activists needs to care about the alarmingly high rate of HIV among trans women – and to push our organizations, political leaders and the pharmaceutical industry to do so as well. Silence can still equal death for trans people who can’t access medical care. It’s time to remind everyone of this.[/pullquote]

It’s time for all of us to wake up to this issue. As we revive the conversation around gay and bi men and HIV, it’s time to end this epidemic for trans people too. (Note: Many of my suggestions originally appeared in “Injustice at Every Turn.”)

This is what it takes:

In order for all of us – poz or not, trans or not, queer or not – to do right by trans women, we have to do more than tune into I Am Cait once a week. We have to tear down and rebuild the systems that are here to care for trans and gender non-conforming people in a way that really works. We have to remove the stigma of being trans, of being positive, of seeking to take an HIV prevention treatment. That’s only one step, and there are many needed, but just that, understanding and truly caring about trans people, can take us quite a way.

*Diane Anderson-Minshall is editor in chief of Plus magazine and editor at large for The Advocate magazine. You can find her online at HIVPlusMag.com and Advocate.com. This column is a project of Plus, Positively Aware, POZ, TheBody.com and Q Syndicate, the LGBT wire service. Visit their websites – http://hivplusmag.com, http://positivelyaware.com, http://poz.com and http://thebody.com – for the latest updates on HIV/AIDS.