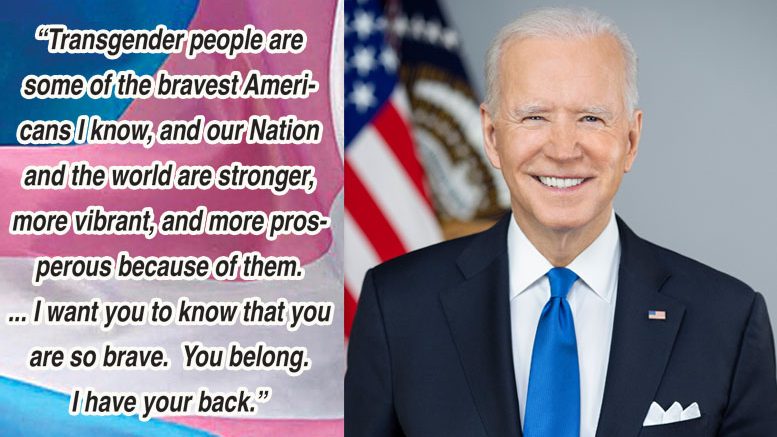 President Joe Biden put out a statement yesterday, March 31, marking the date as Transgender Day of Visibility, TDOV, calling upon Americans to “lift up the lives and voices of transgender people” in the nation while “eliminating discrimination … .” He also recognized the community’s strength, endurance, and tenacity in the face of tremendous obstacles.

“On this day and every day, we recognize the resilience, strength, and joy of transgender, nonbinary, and gender nonconforming people,” the President’s statement read. “We celebrate the activism and determination that have fueled the fight for transgender equality. We acknowledge the adversity and discrimination that the transgender community continues to face across our Nation and around the world.”

He added words that are not often or ever said or heard of by any other past U.S. president.

“To everyone celebrating Transgender Day of Visibility, I want you to know that your President sees you,” his statement continued. “The First Lady, the Vice President, the Second Gentleman, and my entire Administration see you for who you are — made in the image of God and deserving of dignity, respect, and support.”

In stark contrast to his predecessor, Donald Trump, President Biden’s direct message mentioned the importance of visibility, support, and laws protecting the trans community. Sharing stories of what the transgender members of the U.S. are doing to continue to be full-functioning members of society, despite the hatred and disregard of the past administration directly targeting them, matters.

“Visibility matters, and so many transgender, nonbinary, and gender nonconforming Americans are thriving,” his statement highlighted. “Like never before, they are sharing their stories in books and magazines; breaking glass ceilings of representation on television and movie screens; enlisting — once again — to serve proudly and openly in our military; getting elected and making policy at every level of government; and running businesses, curing diseases, and serving our communities in countless other ways.”

Unlike the President, many conservative lawmakers (and states) are pushing for anti-Trans legislation that does not only violate trans people’s rights, but that supports pro-hate laws that are sending shock waves to parents, school personnel, and medical professionals, laws that mainly hurt trans youth nationwide. An Axios 2021 report stated that Republicans “in at least 25 states have introduced over 60 bills targeting transgender children — a legislative boom since January that has beaten 2020’s total number of anti-trans bills.”

In addition, at the beginning of 2021, the ACLU reported that there were “twenty-six state legislatures [that] initiated 41 bills in just the first two months of 2021 to exclude trans youth from [sports] teams that align with their gender identity.”

The president, who fulfilled his support of the trans community as soon as he was in the White House with the revocation of Trump’s Trans Military Ban, called upon Americans to support the rights of transgender Americans.

Likewise, the Commander-in-Chief continues to call on Congress to pass the Equality Act “which will ensure that LGBTQI+ individuals and families cannot be denied housing, employment, education, credit, and more because of who they are or who they love.”

“We are expanding Federal non-discrimination protections; promoting strategies to address violence against the transgender community and advance gender equity and equality; and disseminating new resources to enhance inclusion, opportunity, and safety for transgender people,” he reiterated. “Additionally, Americans will soon be able to select more inclusive gender markers on their passports.”

And he highlighted transgender people’s courage and resiliency while showing his full support for transgender diverse people. The President’s reassuring words were part of his closing for the commemoration of the Trans Day of Visibility.

“Transgender people are some of the bravest Americans I know, and our Nation and the world are stronger, more vibrant, and more prosperous because of them, his statement read. “To transgender Americans of all ages, I want you to know that you are so brave.  You belong.  I have your back.”