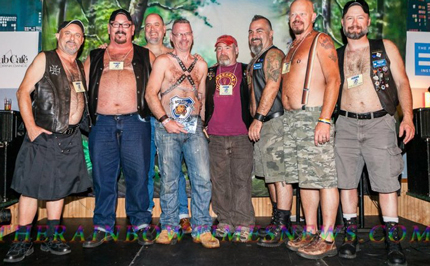 BOSTON, Mass.—Bear, cub, chub, otter, chaser, or admirers are just some of the various identities commonly used to refer to members in the Bear Community. This sub-culture is one of many in the LGBT spectrum, a community that often does not get the recognition it deserves.

MASSBEARZ is an all-inclusive Boston-based social and charitable organization dedicated to re-incarnate the fraternal spirit amongst the Greater Boston Bear Community. Established in 2011, the newly formed organization sought to fill a void that defunct bear groups left behind, according to the organization’s co-founder.

“The New England Bears (NEB) had formed in 1991, at the beginning of the bear culture phenomenon that was sweeping the country,” said M. Jeff Zirpolo, Co-founder, MASSBEARZ. “That group thrived for many years, enjoying huge success, but disbanded due to many struggles in 2005. Mass Bay Bears formed from the residual elements from the NEB, but lasted for about 2 years. We hope MASSBEARZ remains inclusive of all. [It] intends to be a ‘member’s group,’ operating very differently from prior organizations.”

According to Brad Chapman, also co-founder of the group, the Bear Community includes a wide spectrum of men that identify themselves in many different ways.

“Having diverse characteristics, the Bear Community can be considered a common thread, which is interwoven with other groups, who can be distinctly different from one another,” he explained. “It is comprised of those who either [prefer] a lot of fur (hair) to those who are smooth (hairless). Most identify themselves as bears, cubs, chubs, otters, chasers, or admirers—young or old—but there are no set ‘standards’ for these types of men.  It is a very personal choice …”

“Our mission is to hold activities and events as suggested and desired by the group’s members [and] overseen by The Planning Committee,” Zirpolo added. “These activities are for the Greater Boston gay community, extending across the state and throughout all of New England, promoting brotherhood for our members, and inclusivity of other bear clubs and bear events.”

Due to local interest of a revived “Bear Competition,” missing since 2007, a primary goal during the organization’s formation was to bring it back to the Boston area, explained Zirpolo. This competition became known as Mr. Boston Bear.

“The event is always fun and creative,” he said. “This is a foundation that unites and builds a strong community. The event employs four basic elements that include interviews, introductions, brawn and public speaking.”

The synergy created between duties of the winner of the competition and other community-based organizations revolves ten-fold.

“Mr. Boston Bear, as a title holder, is a person chosen to take a leadership role in the Bear Community, with assistance as needed by MASSBEARZ,” Zirpolo said. “It is a symbiotic relationship. MASSBEARZ provides the means, the sponsorship and planning for the annual competition. The Mr. Boston Bear titleholder earns the opportunity to represent our community, as well as MASSBEARZ. He can create and/or assist with events throughout the bear and gay communities. The title and competition, together with MASSBEARZ, promotes community pride.”

“I have helped to bring MASSBearz to the frontlines of the LGBTQ community by helping to coordinate the group walking in the Boston Pride Parade …  [and] the first ever appearance in the Providence Nighttime Pride Parade this past June,” said Stephen Hogan Jr., Mr. Boston Bear 2011. “I have also made many appearances and even judged other competitions in Provincetown.”

But, charitable initiatives do not end with the LGBT community. MASSBEARZ next big event is the Teddy Bear Balls toy drive which aims to assist those in need.

“We had huge success with an incredible outpouring of support during the 2011 Holiday season with our Teddy Bear Balls,” said Zirpolo. “This effort was spearheaded by Stephen Hogan, Mr. Boston Bear 2011. We were able to bring joy and tears to local Boston charities such as The Home for Little Wanderers and Solutions at Work.  In Providence R.I., the AIDS Care Ocean State’s pediatric division benefitted from the generosity of the community.  We hope to expand this effort to other cities. The Bear Community is very generous, donating quality toys and gifts to those in need. The New Hampshire Bears surprised us last year by bringing their toy drive donations to add to our donations; a true gesture of unity and brotherhood.”

MASSBEARZ holds monthly and annual fundraisers throughout the year.

“All fundraisers that MASSBEARZ sponsor for charity are specifically targeted for a preselected charity,” explained Zirpolo. “However, there are some fundraisers which we hold for MASSBEARZ to help defray our operating expenses. These funds provide for website costs, marketing materials, essentials required for events, as well as other costs to operate the group.”

According to Chapman, other events include a partnership between MASSBEARZ and groups such as Back2basics to produce Boston’s only monthly “Bear” Tea Dance at Club Café.

Public events do not stop with the The Bear Tea Dance and Mr. Boston Bear. In fact, there is a wide variety to choose from, ranging from a more intimate setting to large facilities.

“We strive to promote quality in-person public events, while maintaining a supportive and social online networking presence,”Zirpolo added. “We hold a monthly meeting/social on Thursday Nights at the Alley Bar in Boston at 7:30 p.m., which is open to all members and those interested in the group. … We have annual charity and other fundraising events. We schedule social gatherings, at both public restaurants as well as pot luck dinners at member’s homes, which is also open to those who want to learn more about the group. We [also] hosted both a beach and a pool party this summer. There is always something new and different being conceived.”

To date, MASSBEARZ boasts over 130 members.

“Our membership is diverse,” said Zirpolo. “Those who identify as a bear, cub, chub, chaser, an admirer, or just enjoy the company of like-minded guys, are all welcome to become a part of, and enjoy all that MASSBEARZ can provide.”

“There are no set ‘requirements’ to become a member,” Chapman added. “However, how they identify themselves in the Bear community may be used as a guideline.”

“Since our inception, our members have enjoyed charter non-dues membership which is expected to continue through the end of 2012,” said Zirpolo.

Other information, including upcoming events and how to become a member of MASSBEARZ can be found on their site at www.massbearz.com or at their FaceBook page at Facebook.com/MASS BEARZ. To view the Mr. Boston Bear Competition photos check out: http://tinyurl.com/bqq2kco