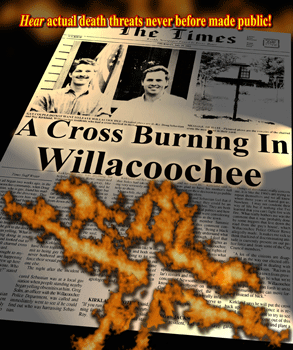 Even though little was done or heard, the Willacoochee violence took place and not many paid attention to it, nor helped to assist the real victims of it all

“And there stood a burnt wooden cross in our front lawn, right at the end of our driveway,” said Doug Sebastian, filmmaker/director, while containing the tears. “To look out and see a symbol like that, a symbol that I knew what that meant … That’s not something I would want anyone to have to experience.”

“I thought the cross-burning incident was sickening,” said Roy Kirkland, writer/actor, in one of the scenes of his and Sebastian’s film, A Cross Burning in Willacoochee referring to anonymous phone calls the couple had received. “This was worse. It was worse because you have a voice, there is someone there now telling you that they’ve done something to you and then threatening your life.”

Some of the threats heard in the film showed the anti-gay sentiment that certain Willacoochee residents purportedly felt towards the gay couple. The voices and verbose used against them tell the story.

“… your mailbox has been tore all to be damned! And it wasn’t the (expletive for African Americans) down the road that did it! (Laugh). It was the f@&%$&# law! (expletive for gay men) … you’re a dead mother f&$#@%!” were the recorded words of the men who openly threatened Kirkland and Sebastian in 1993.

Other indirect warning sign also came from Kirkland brother’s statements to tone down the “gay gatherings” at their Willacoochee home. The main incident following these acts was something completely unexpected—especially for Kirkland and Sebastian.

On July 21, 1993, their Willacoochee home inexplicably burned to the ground. The arson, gone unpunished for 17 years, is still a mystery and Willacoochee officials are, according to the interview below, apparently not investigating it further.

Seventeen years without answers have gone by. Time is not the relevant aspect of this story, but the story itself. The Rainbow Times decided to conduct a one-on-one interview with Kirkland to inquire about his and Sebastian’s personal journey through these events. This story’s significance to current news events about bullying that has led to LGBT youth suicide, homicides, bashing and abuse, carries sufficient reason to further investigate it. According to Kirkland, their account has mostly been ignored by the gay media.

Kirkland, who originally moved with Doug to Willacochee from Atlanta, explained that although they separated in 1998, they are forever bonded by what happened to them in Willacoochee. According to Kirkland, they remain “the best of friends and are business partners.”

The Rainbow Times: How do you feel now, after what took place in Willacoochee?

Roy Kirkland: I feel much better. I love my work. I love the fact that Doug and I finally came together with this documentary and told our side of the story in full detail. Many people, including close friends, had no idea what happened to us and were shocked.

TRT: Do you feel safe in Georgia?

RK: Very much so. Valdosta has been extremely friendly to us. There are about 100,000 people here and we have filmed a gay comedy and this documentary here and the local press has done extensive coverage. Our documentary made the front page.

TRT: How long did the ordeal with the insurance company last? [See the film for details.]

RK: Six months. It was as painful and scary dealing with the Insurance Adjuster, who admitted he recently completed military service and “wasn’t for Gays in the military.” He was this blunt and bigoted toward us.

TRT: For how long were Doug and you without a house after your house was burned down?

RK: For almost nine months. We stayed in hotel rooms. We had no one to come to our aid to help us out, no Gay organizations in particular.

TRT: How do you feel emotionally after everything that took place?

RK: Curious, pissed off, and relieved. I’m curious to know who did these things to us. The death threat remains a huge part of my curiosity. I am pissed off because we didn’t fight back. We didn’t have help to fight against the wrongdoing. If it weren’t for former Georgia Insurance Commissioner Tim Ryles, we wouldn’t have had a chance against State Farm. Finally, I feel relieved because although it took many years to get my nerve up, I went along with Doug and made this documentary.

TRT: As of now, were there any charges or suspects brought in for interrogation for what happened?

RK: No. To this day, no one has come forward to name anyone nor was anyone ever charged with these crimes. The GBI report contained fifteen pages of what one could have read in the newspapers at the time. In November of 2009, we placed a full-page ad in the Atkinson County Citizen pleading with the citizens of Willacoochee, Georgia to go to our website and identify the voices of the individuals who left a death threat message. No one responded although our website received over 3,000 hits that week!

TRT: Did you sell the Willacoochee property, or do you still own it?

RK: I sold it to my brother. He bought it and finished clearing up the burned house.

TRT: Why do you think it is important to share the film with LGBT audiences?

RK: For these huge reasons. To encourage people, particularly younger folks, to stand up for themselves. To show the lack of support from Gay organizations during our ordeal and today. I constantly receive emails from many people who thank me for making this documentary. They usually have a story of their own to share with me. … And, I would like to know who did these things to us and why no one was ever arrested.

TRT: Do you usually give partial proceeds from the film to certain organizations? Which organizations are they? And, why do you do so?

RK: In the early stages of filming this documentary, we wanted this documentary to be about something more than just our story. We wanted so much to reach people who continue to suffer from discrimination and bigotry and to encourage them to stand up and bring to light the wrong being imposed on them. I contacted the Human Rights Campaign, HRC, GLAAD, and The Matthew Shepard Foundation. They all responded as though I was asking for money. I wanted to share our story and include their info in our documentary and website. We also offered a portion of the sales to them. None were interested.

TRT: Is the fact that people seem to be disinterested in your real-life story something that baffles you?

RK: It’s not that people are disinterested, it’s the fact that some in the Gay media pick and choose whom they want to cover. I strongly believe, and many others do as well, that our story is powerful, encouraging, and is as important as the documentaries “Outrage” and “A Gay Bar.”

TRT: Why should people watch the documentary?

RK: Because the documentary shows two individuals who had an uphill battle against a group of people, City Officials, City Police, Georgia Bureau of Investigation, GBI, and State Farm Insurance. Because it shows two unknown broke gay men in a very small town who stood their ground, even though the odds were heavily against them, and prevailed.

TRT: Do you feel that the same type of situation could occur/is occurring in 2010?

RK: Yes! Not just against Gay people either. It is amazingly scary what is going on in our country today. It seems as though liberty and freedom for all are taking a few steps back. Gay crimes are still going on.

TRT: What do you expect to accomplish through the film and its audiences?

RK: To remind people that these types of crimes are still happening today and that we have to be there for each other. Also to bring awareness to the fact that many in the Gay community need assistance from the heavily-funded organizations. Many need legal assistance and representation but cannot afford it. These organizations need to concentrate on helping those who are not necessarily famous or influential.

TRT: What is next for you?

RK: We feel a need to have a “March to Willacoochee” on the anniversary of the Cross Burning on July 21, 2010. I would like to bring awareness to what happened to us and to show what happens when a town remains silent while bigotry is upheld. [I want] to remind city officials that you should never condone or approve hate crimes. Doug and I would also like to add our voices (and this documentary) to the cause of the LGBT community to push for an LGBT Equal Rights Amendment added to the 1964 Civil Rights Act.

A Cross burning in Willacoochee was the Winner for Best Documentary at the New York International Film Festival. A Prestigious New Directors Documentary Award also went to Doug Sebastian. The film won recognition as Official Selection at the Atlanta Out on Film Festival.

For more information or to place an order to buy the documentary, A Cross Burning in Willacoochee, visit spookbridge.com. To contact Kirkland, email him at dspmovies@yahoo.com or via Facebook at Roy Kirkland/Valdosta, GA.

Graysen M. Ocasio is the publisher of The Rainbow Times. He holds a Bachelor’s in journalism from Temple University, PA, and an MBA from Marylhurst University. He can be reached at publisher@therainbowtimesnews.com.