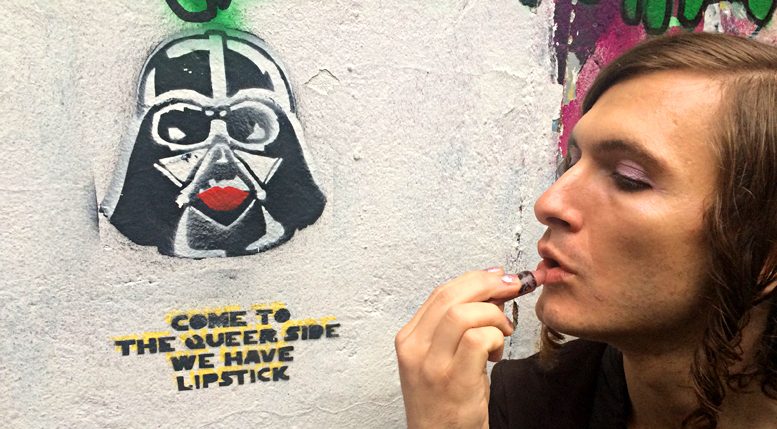 Evan Greer has had enough. The Jamaica Plain resident, fed up with the media’s consistent misgendering of transgender people, is taking and publicly demanding that news outlets become more culturally competent around pronoun usage.

“I know who I am and someone calling me ‘sir’ doesn’t change that,” said Greer. “But the broader impact that misgendering has on my community upsets and concerns me. It contributes to the systemic oppression that trans and gender nonconforming people experience, and it needs to stop.”

The idea for the petition came from Greer’s real-life experience of being misgendered hundreds of times by mainstream media outlets in her role as a nonprofit spokesperson and musician. Greer says because she has a typically masculine name and a more masculine voice, she is often misgendered.

“The reality is this isn’t a ‘press specific’ problem—it’s a broader problem in our society that the media could play an important role in helping fix, by taking the simple step of confirming sources’ gender pronouns before covering them in print or on the air,” she said.

“When we accidentally call a cisgender person by the wrong honorific, we get embarrassed and profusely apologize even though the cis person knows that you know their gender identity, because most people think that calling someone the wrong gender is insulting,” said Itai Gal, who signed on to the petition. “But for trans people, we are basically told that we should expect for people to treat us in a way that they might otherwise consider insulting; we are too strange, basic decency practices do not apply.”

Greer says that she reached her breaking-point when she was misgendered in an international news publication while being interviewed for a story as a spokesperson for the nonprofit she works for. The story was syndicated to several major news outlets, and several LGBTQ ones also.

“Depending on the situation, being misgendered can range from causing a quick pang of icky feelings to ruining your whole day, making you feel afraid for your physical safety, or causing serious feelings of self-doubt and depression,” Greer said. “At this point, honestly, I’m used to it.”

But Greer couldn’t sit aside while major media outlets continued the insensitive mistake of misgendering trans people. Aside from authoring and promoting the petition, Greer says that she has reached out to a major news outlet to discuss instituting an explicit policy mandating that news staff ask for correct pronouns when conducting interviews.

“This outlet seems very receptive to offering training to their reporters to help address this and prevent misgendering of sources,” she said, noting that she will be meeting with representatives from the outlet in May.

Gal also said that he experienced misgendering by a member of the media.

“When I saw that the reporter used ‘she’ pronouns for me even after I told her what my pronouns were, I understood that my preference of how I want to be called was seen as not real: this is only something for when I’m with my friends, my gender identity is not for professional settings,” he said.

“That’s a dangerous message,” he continued. “It says that trans people aren’t real, that there is something inappropriate about us. The world has a long way to go in terms of making it safer for trans people. Using the right pronouns doesn’t mean we can now cross trans rights off our lists, but it treats our identities as legitimate … ”

“[For] me, it’s simple and it’s part of good journalistic ethics,” said Judy Heithmar, who also signed the petition. “Remember when Caitlyn Jenner publicly came out as trans? The way in which she was written about, misgendered, and portrayed in the media was disgusting.”

Heithmar also referenced Chelsea Manning, a transgender U.S. Army soldier who was convicted of espionage for leaking classified state secrets to WikiLeaks in July 2013. Manning became the butt of several jokes concerning her gender identity and her conviction. Similarly, Caitlyn Jenner was highly ridiculed in the media after her disclosure of her gender identity.

In mainstream media, there is a ignorance when it comes to differences in gender identity. Several mainstream media outlets have referred to transgender people as “transsexuals,” “transgendered,” or “transgenders” and have flagrantly, and sometimes purposefully, misgendered interviewees and story subjects.

“Journalists talk to a lot of people. If they ask all of those people what their preferred pronouns are, the same way they’d confirm the spelling of their name or their job title, it will help open minds and contribute to a culture of respecting people’s gender identities and not making assumptions that lead to painful and oppressive misgendering,” said Greer.

Itai Gal says his hope is that respecting preferred pronouns will be an opportunity for more trans people to become more comfortable with the media:

“I … hope that this practice of confirming people’s pronouns will make it safer for trans people to speak to journalists, and that their voices, which are often silenced, be heard more often.”

The next issue of The Rainbow Times will feature a glossary of pronouns and terms used in the trans community.