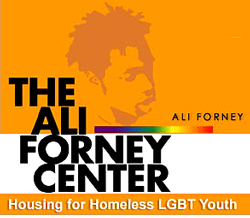 NEW YORK, NY —  November 27, 2012 – The Ali Forney Center (AFC) – the nation’s largest services and advocacy organization working on behalf of runaway and homeless lesbian, gay, bisexual, transgender, and questioning (LGBTQ) youth – today launched its second annual “Homeless for the Holidays” series, featuring the faces and stories of diverse New York LGBTQ youth forced to endure homelessness without shelter.  Beginning today and continuing through New Year’s Day, a YouTube video, featuring a slideshow of a young person as he or she narrates his or her story, will be released weekly, at: www.aliforneycenter.org/homelessfortheholidays.

The first video features Rigo, a 20-year-old bisexual Latino man and Marine Corps veteran, who describes having to sleep on the NYC subway for shelter since the age of 14,and considering committing suicide by drowning at Coney Island. Future videos will tell the stories of other homeless LGBT youths aged 18 to 24.  All installments were created from interviews conducted and photos taken by AFC founder and Executive Director Carl Siciliano.

Said Siciliano,  “It is a terrible thing that so many LGBTQ youth are driven from their homes and forced into destitution in the streets. It is truly one of the most terrible expressions of homophobia in our time. And what they endure is made far worse by their not having access to shelter.”

A census commissioned by the New York City Council was released in 2008 which found that there are 3,800 homeless youth aged 13-24 in NYC, and that 1,600 identified as LGBTQ. New York City only provides 250 youth shelter beds, forcing many youths to wait for weeks and even months to access shelter. The Ali Forney Center has formed a coalition of LGBT advocates and providers called the Campaign for Youth Shelter, who are calling on NYC to adopt a plan to provide shelter to every homeless youth in NYC.

The Ali Forney Center operated a drop-in center in Chelsea that was destroyed during Hurricane Sandy. While the AFC plans to open the first-ever 24-hour drop-in center for homeless LGBTQ youth in an alternate location in Harlem, it will not be fully operational for several months.  In the meantime, New York’s Lesbian, Gay, Bisexual, and Transgender Community Center has generously offered AFC some of their space to provide temporary drop-in services; the drop-in center is currently operating out of Room 212 in the Center, at its former weekday hours.

About the Ali Forney Center

The Ali Forney Center (AFC) was started in June of 2002 in response to the lack of safe shelter for LGBT youth in New York City. The Center is committed to providing these young people with safe, dignified, nurturing environments where their needs can be met, and where they can begin to put their lives back together. AFC is dedicated to promoting awareness of the plight of homeless LGBT youth in the United States with the goal of generating responses on local and national levels from government funders, foundations, and the LGBT community.  For more information, go to: www.aliforneycenter.org.