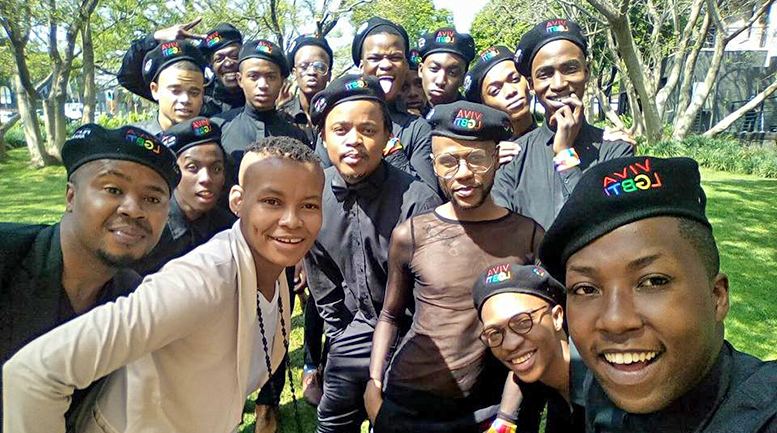 The Boston Gay Men's Chorus will share a stage with the Mzansi Gay Choir this June in Johannesburg to raise money for LGBTQ youth. Photo: BGMC

Know what the Boston Gay Men’s Chorus (BGMC) will be doing on June 15? They’ll be sharing a stage with their brothers in the Mzansi Gay Choir in South Africa. Founded in 2015, the choir is one of the newest gay men’s choruses to have formed over the last four decades, and the group has made its presence known in a very short time, with TV appearances and other high profile gigs.

Mzansi Gay Choir regularly performs original material and members are serious about using their musical platform to effect change. Check out this short video marking the choir’s first anniversary to hear their expert harmonizing and how they work to break down prejudice against LGBTQ people through music.

“Let us not fight about this,” says Matthews Motsoeneng, the choir’s assistant manager. “Let us just make peace.”

BGMC and Mzansi Gay Choir will sing together at the Soweto Theatre in Johannesburg June 15. The concert will benefit the Kliptown Youth Program.

Around the globe, Mzansi Gay Choir is one of hundreds of gay men’s choruses that are inspiring audiences and showing the world what LGBTQ pride looks and sounds like.

The Gay Men’s Chorus movement began with the founding of the San Francisco Gay Men’s Chorus in 1978 and quickly spread across the country—including BGMC’s founding in 1982. While the interest in gay men’s chorus was initially confined to the United States, it wasn’t long before the movement spread to cities across Europe and beyond. Today, it continues to grow (as do the number of women’s choruses and LGBTQ choruses).

It’s difficult to quantify exactly how many gay men’s choruses currently exist. Legato, an umbrella organization for European LGBTQ choruses, has a database of organizations throughout Europe, Australia and New Zealand and a neat interactive map that pinpoints the location of each chorus and designates whether it’s a men’s, women’s or mixed group. GALA Choruses, the umbrella organization for North American LGBTQ choruses, also has a directory of choruses worldwide. But not every gay or LGBTQ chorus can be so public due repressive regimes and laws that punish homosexuality or the free expression of LGBTQ-themed ideas, art and other material (Russia’s ban on “gay propagandizing” to minors comes to mind).

One of the first gay men’s choirs to form outside of the U.S. was Homophon (peruse their website with Google Translate), founded in 1987 in the German city of Münster. Irreverent and in your face, these guys have long preferred drag and outlandish costumes to tuxedos or matching t-shirts. In 1995, Homophon abandoned their accompanist and went all acapella, all the time. Their pipes are certainly worthy of center stage, as their cover of Pharrell’s “Happy” proves.

In 1991, during some of the worst days of the AIDS crisis, the London Gay Men’s Chorus (LGMC) was born when nine friends got together to sing Christmas carols in a city subway station to raise a money for a local AIDS service organization. Today, with more than 200 members, LGMC is the largest gay chorus in Europe and regularly sells out major concert halls. This moving short video gives a brief history and overview of the chorus, but if you really want to know how they pack those concert halls, check out their 2013 performance of Michael Jackson’s “Thriller.”

In more recent years, BGMC was thrilled to learn that the Czech Republic, which BGMC visited on its 2005 Eastern European tour, now has its own gay men’s chorus. Formed in Prague in 2011, Doodles has grown from 15 to 30 members over the past seven years. In 2015 the chorus sang with LGMC during Prague Pride. Though they mostly sing in their native tongue, Doodles sounds great in English, too. Check out the group’s acapella performance of Eurythmics’ “Sweet Dreams.”

The gay men’s chorus movement isn’t just confined to North America and Europe, however. A year after Doodles came into being, the Puerto Vallarta Gay Men’s Chorus became the first gay chorus in all of Mexico and Latin America. It was joined in 2013 by Coro Gay Ciudad de Mexico, Mexico City’s gay men’s chorus. Earlier this year, Coro Gay Ciudad de Mexico and the Gay Men’s Chorus of Los Angeles announced a historic collaboration aimed at building bridges between the U.S. and Mexico, including a free, joint concert in California in October. And way down in Australia, the Melbourne-based Low Rez has been making beautiful music—with a specialty in pop music—since 2008. From Petula Clark’s “Downtown” to Radiohead’s “Creep,” the Low Rez repertoire isn’t confined to a particular pop period. No matter the song, these guys always look—and sound—like they’re having the time of their lives.

BGMC is proud to be part of the worldwide family of gay men’s choruses and this wonderful tradition of making music to entertain and inspire positive change, which only continues to grow. BGMC looks forward to meeting and joining voices with the Mzansi Gay Choir in South Africa. Beautiful—and life-changing—music will be made.

The Boston Gay Men’s Chorus will tour South Africa June 11-25, 2018 and partner with local nonprofit organizations to help raise money and awareness about issues including HIV/AIDS, and the needs of LGBTQ youth and LGBTQ refugees and asylum seekers. If you want to contribute to the tour to help BGMC raise money for local South African nonprofits serving LGBTQ people, please click here. Check BGMC’s tour blog at BGMCBlog.org, or its Facebook, Twitter, and Instagram accounts for regular #BGMCTour updates.

[From a News Release].