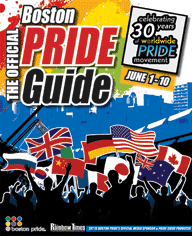 The 2013 Boston Pride Guide will be available throughout Boston Pride week at numerous venues, events and at the Boston Pride parade & festival. It will also be inserted into each issue of The Rainbow Times, which has an estimated readership of 75,000 throughout New England.

The Rainbow Times is bringing back the popular Boston Pride Map in 2013.

Background: In 2011, our team proudly produced the Official Boston Pride Map, which served as the vehicle to disseminate the critical information of the Boston Pride Parade, Festival and Pride-related events. Boston Pride is nationally known as the largest Pride celebration in all of New England.  View our map demonstration here.

What is it? This foldable, 11 x17 pocket-sized, full color, glossy map will showcase the parade route, LGBTQ events throughout Pride week, and the advertisers who recognize the importance of targeting the prominent LGBTQ community in New England. Multiple advertising spaces are offered to suit your needs.  View our map demonstration here.

Reach: This map will be available throughout Pride week throughout 600+ locations throughout New England and as a centerspread in the May edition of The Rainbow Times. With a readership of 75K you’re sure to reach your market.