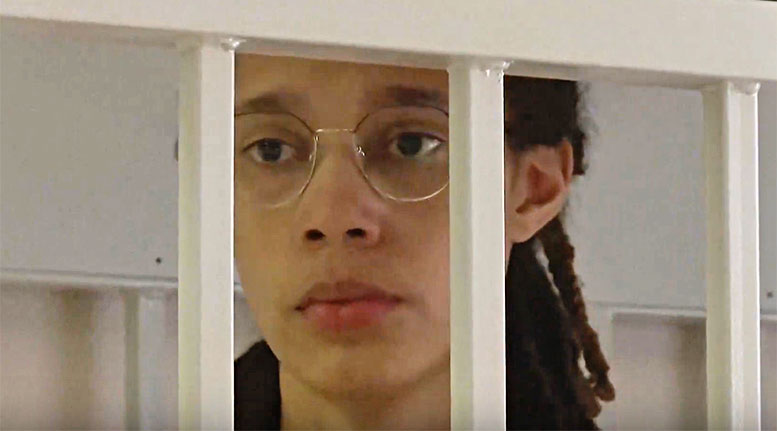 The basketball star Brittney Griner, used as a Russian political pawn, in her plea for clemency also apologized to her fans, among many others

The WNBA player and two-time gold medalist, Brittney Griner, was found guilty by a Russian Court of attempting to smuggle drugs into the country. Her sentencing comes in the middle of the Ukraine-Russia war and a time in which US relations with Russia are at an all-time low. President Joe Biden immediately responded to the sentence, demanding Russia release her.

“… It’s unacceptable, and I call on Russia to release her immediately so she can be with her wife, loved ones, friends, and teammates,” read part of his statement. “My administration will continue to work tirelessly and pursue every possible avenue to bring Brittney and Paul Whelan home safely as soon as possible.”

The court sentenced Griner to 9 1/2 years in a penal colony, according to The New York Times, while Griner wept and asked for clemency while apologizing to her teammates, friends, and family. 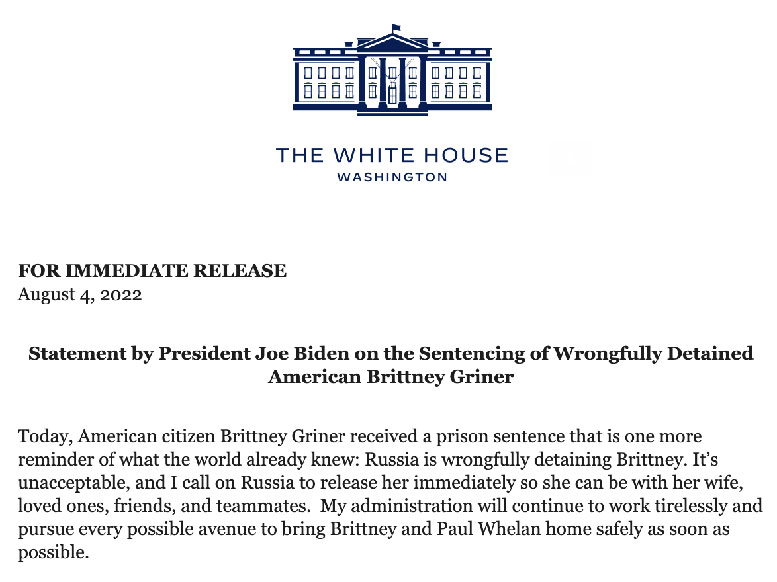 “My parents taught me two important things. One, take ownership for your responsibilities; and two, to work hard for everything you have. That’s why I plead guilty to my charges. I understand everything that’s being said against me, the charges that are against me … but I had no intent to breaking the Russian law.

“I never meant to put in jeopardy the Russian population. I never meant to break any laws here. I made an honest mistake and I hope that in your ruling, that it doesn’t end my life here.” Griner is 31 years old.

The Court sentence found her “guilty of deliberately bringing cannabis-infused vape cartridges into Russia despite them being illegal,” reported Reuters.

A few days ago, the Biden administration allegedly offered Russia a prisoner swap that included Americans Griner and Paul Whelan, for the release of Viktor Bout, a Russian arms dealer once labeled the “Merchant of Death” who was sentenced to 25 years in prison in 2012 on charges that he schemed to illegally sell millions of dollars in weapons.

Reactions to Griner’s conviction via social media were immediately seen. Some are below.

As Ive always said- Trump ain't sh^t! Proving again he's Putin's lapdog, he blasted the #BrittneyGriner deal in a slanderous rant. Now folks can stop with the fan fiction that Trump gives a damn about Black people. And I peep these folks who DGAF about BG anymore than Trump. pic.twitter.com/h1F0y4wazl

My heart breaks for Brittney Griner, her wife & her family! I need America to do all that it can to get this woman home immediately! End this nightmare!

Nine and a half years for #BrittneyGriner on trumped up charges of drug smuggling and wrongful detention since February 17.
BG is a political prisoner and a pawn in Putin's game. #FreeBrittneyGriner and bring her home. pic.twitter.com/gZjv2fU5b1

Wait– of course the racist orange bastard Donald Trump told a bunch of lies on #BrittneyGriner and called her spoiled. What do u expect from someone who gave Rush Limbaugh a medal? Trump would of give Hitler a medal if he could. #MorningJoe