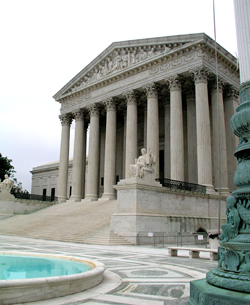 Tuesday’s landmark oral argument in a case testing the constitutionality of President Obama’s Affordable Care Act had some very interesting moments—such as when the chief justice seemed to support the notion that if a person doesn’t have kids he or she should not have to help pay for taking care of kids. It’s the kind of argument some in the LGBT community have made in years past when complaining about paying local taxes to support schools even though many gay people don’t have children.

In this week’s landmark case before the U.S. Supreme Court, all three of the nation’s major LGBT legal groups signed onto a brief in support of the new federal health insurance law. They did so along with two other LGBT groups and 11 groups helping people with HIV. And their point was not that gays shouldn’t have to pay for maternity or pediatric services that many LGBT people will never need.

The 30-page brief was one of more than 130 briefs filed in HHS v. Florida and several other lawsuits seeking to strike down the Patient Protection and Affordable Care Act (ACA), signed into law two years ago by President Obama.

Initial reaction to oral arguments Tuesday suggest the law is in peril of being struck down as constitutional. That’s because the presumed “swing vote” on the nine-member bench—Justice Anthony Kennedy— expressed strong skepticism about the right of the federal government to mandate citizens to purchase insurance coverage.

One question from Kennedy echoed complaints by opponents of ACA: “Can you create commerce in order to regulate it?” asked Kennedy at the start of Tuesday’s session. U.S. Solicitor General Donald Verrilli, arguing in defense of the ACA, said the law is not “creating commerce” but rather regulating an already existing commerce—that of financing the use of the health care system by people who don’t purchase insurance.

“So you’re not — it’s not your free choice just to do something for yourself,” interjected Justice Ruth Bader Ginsburg. “What you do is going to affect others, affect them in a major way.” In other words, by choosing not to buy health insurance, a person is causing others to pay more for their health services so that health care outlets can provide free services to the person who has no insurance.

Still, said Kennedy, the ACA “requires the individual to do an affirmative act.”

If there is a market

That’s when Chief Justice John Roberts added the interesting argument in support of Kennedy’s point: Roberts said the theory used to justify the ACA “is that there is a market in which everyone participates because everybody might need a certain range of health care services, and yet you’re requiring people who are not — never going to need pediatric or maternity services to participate in that market.”

That has been an argument used by many in the gay community for years —that LGBT citizens are required to pay local taxes to support schools even though many do not have children. The response offered by some in the past has been that gays benefit indirectly by ensuring that all children are well-educated and cared for.

Verrilli responded that, “there is not a market in which you can say that there is a immutable class of healthy people who are being forced to subsidize the unhealthy.”

The HIV patients, organizations “brief in”

The legal issues before the Supreme Court in regards to the ACA are not explicitly, directly LGBT-related, but the law is of tremendous interest to people with HIV specifically and of considerable benefit to LGBT people generally.

The brief filed by Lambda Legal, Gay & Lesbian Advocates & Defenders, the National Center for Lesbian Rights, the National Center for Transgender Equality and others in support of the ACA says the law ensures there is health coverage for people with HIV and that that benefits society generally. By doing so, said the brief, the law helps stem the spread of the virus to others and to keep a lid on the enormous burden that HIV infection puts on the health care system.

Before the ACA was enacted, notes the brief, 30 percent of people with HIV had no insurance —public or private.

What about health insurance?

The arguments in the high court this week included whether federal law can require that all people buy health insurance coverage and whether states can be required to cover the expanded number of people qualifying for Medicaid under the ACA. They also included questions about whether the whole law must be struck down if the ACA’s requirement that all individuals obtain coverage is declared unconstitutional. And they included an argument over whether the penalty imposed upon those who won’t buy coverage constitutes a “tax” and, if so, whether a rather obscure federal law might require that constitutional challenges to that “tax” wait until it kicks in, in 2014. On this latter point, most media observers believe the court will rule on the law’s constitutionality.

The focus of most media reports —and of the Lambda brief— concerned the mandate that everyone purchase health coverage. The Lambda brief refers to this as the “minimum coverage requirement” or MCR, while most media reports dubbed it simply the “individual mandate.” With some exceptions (including religious-based objections and poverty), everyone must obtain health coverage starting in 2014 or pay one percent of their income annually as a penalty. Over the years, the penalty rises, but there are limits to how high it can go.

Without the individual mandate, said the Lambda brief, the ACA “would be far less effective in curtailing the HIV epidemic and its economic costs.”

“Insurance premiums would be prohibitive for many people with HIV,” noted the brief, “providers would be scarce or nonexistent, and ultimately few people with HIV would have private coverage.” And that’s a problem not only for people with HIV, said the brief, but for public health. People with HIV who do not get adequate medical attention are more likely to spread the infection and to create a greater burden on the “social insurance of a health care system paid for by others.”

With the individual mandates, argued the Lambda brief, “thousands of lives—and billions of dollars—could be saved each year, and the HIV/AIDS epidemic could be dramatically curbed.”

Lambda also argued against the idea that each state should be able to decide for itself whether to enforce an individual mandate.

“Piecemeal local attempts to extend insurance coverage for those living with HIV will not curb the national epidemic,” argued Lambda. “If the [individual mandate] is not implemented nationally, states such as Florida will continue to have large, and likely growing, populations of uninsured individuals with HIV.”